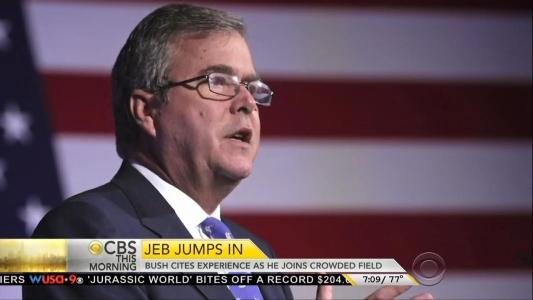 Jeb Bush’s entry into the 2016 GOP primary race hands the liberal media an establishment candidate that they enjoy using as a tool to whack conservatives. Bush’s stances on immigration, Common Core and other issues have drawn praise from the likes of Chris Matthews who cooed: “He wants to run on his own terms. He’s not going to become a wacko bird. He’s not going to join the clown car...he believes in Common Core education. He believes in immigration.”

The Washington Post’s E.J. Dionne hopefully cheered Bush could become a “change agent in the Republican Party” on immigration because for Bush “It’s about love for their children. That doesn’t go over well in large parts of the party.”

It wasn’t always this way for Jeb Bush. Whenever he was in the way of a liberal candidate or signed conservatives legislation they attacked him. When he was running for the Florida governorship in 2000 against liberal Democrat Lawton Chiles he was described by ABC’s Jack Smith as “a radical conservative.” And in 2005 ABC reporter Jeffrey Kofman compared him to the fictional Dirty Harry when he signed pro-gun legislation: “What was it Clint Eastwood said, ‘Go ahead, make my day?’ Well, Florida Governor Jeb Bush has done just that for gun owners here in Florida. It's going to be a lot easier to shoot and kill someone in the name of self-defense.”

When there was a move to eliminate racial quotas for state college admission, in 2000, CBS’s Byron Pitts sneered: “Few believe Bush will be swayed by the protests and passions of people who didn't put him in office in the first place. But like the demonstrators in Selma 35 years ago, who were beat back with night sticks and tear gas, those who gathered today said they'll be back here or in court.”

But now that Bush is seen, by the liberal media, as a moderate and therefore more acceptable choice compared to his conservative rivals they seem more willing to praise him.

The following quotes from the MRC archives are a few examples of the media’s attempt to use Jeb Bush as a way to slam conservatives:

Jeb Is Better than Those “Wacko Bird,” “Clown Car” Conservatives

“Jeb Bush, last night, became the latest in the Republican Party to speak truth to power or try to. While admitting he is thinking about running for President, he put forth the belief that he would have to lose in the primaries, especially early on, to win the election. Noting the missteps past candidates have made in perhaps trying to play too far to the right before heading into the general election.”
— Brian Williams on NBC Nightly News, December 2, 2014.

“From these rocks [in Kennebunkport, Maine], the 41st President watches politics from a distance, his son saying neither his father, nor Ronald Reagan, would be accepted by any rigid Republican faction today. [to Bush] Jeb said recently that he worries about the Republican Party and the polarization.”
— Anchor Diane Sawyer profiling George H. W. Bush on ABC’s World News, June 15, 2012.

NBC’s Alexander to Jeb: How Can You Overcome “Ideological Problems” of GOP?

Peter Alexander: “How are you going to help the party overcome the ideological problems that, sort of, torpedoed it in 2008 and 2012?”
Jeb Bush: “I don’t think we have an ideological problem. I honestly don’t. I think we need to be focused on laying out a – a compelling alternative to where we are today.”
Alexander: “Bush may dismiss any ideological problem. But conservatives on the right have serious concerns about his positions on immigration and education – both of which could give him headaches going forward.”
— NBC’s Peter Alexander on NBC Nightly News, April 17, 2015.

Chris Matthews: Jeb Would Be Hillary’s “Worst Nightmare” He Puts “The Middle in Play”

“Is Jeb Bush conservative enough to be the Republican nominee in 2016?....I think he’s the Hillary people’s worst nightmare if he runs. Because if he wins the nomination, the middle is in play.”
— MSNBC’s Chris Matthews on Hardball, February 26, 2015.

“The irony here is, it’s almost a delicious irony, is that Jeb Bush, if he runs, maybe a change agent in the Republican Party, and you’re seeing that in what Rush Limbaugh is saying, because he’s going to run as someone who’s not opposed to immigration reform. Indeed, he said and enraged a lot of people in the party, that immigrants who come here - it’s not about illegality. It’s about love. It’s about love for their children. That doesn’t go over well in large parts of the party. He’s actually very conservative, including on education. He supports vouchers. But in the Republican Party, if you support the Common Core curriculum now, that’s almost a communist act. So, then, I think Jeb is going to have to run as someone who wants to change the party from where it is now.”
— Washington Post’s E.J. Dionne on MSNBC’s The Last Word with Lawrence O’Donnell, December 16, 2014.

“Far to the Right” GOP Needs a Moderate Like Jeb to Rescue Them?

“Jeb Bush is apparently now thinking about running. And, you know, I have a source that told me that, if Jeb Bush decides not to run, that Mitt Romney may actually try it again. Because they’re very concerned that the party is not moving forward, that the party has moved so far to the right that, you know, they can’t elect a presidential candidate.”
— CBS’s Bob Schieffer on Face the Nation, April 27, 2014.

Jan Crawford: “[Jeb] Bush is also signaling he would run a more centrist campaign. He recently declined an invitation by Iowa Congressman Steve King, a conservative hardliner, to speak at a political forum that will showcase other potential Republican contenders. King has made controversial comments on immigration, in stark contrast to Bush’s more moderate position on the issue.”
...
Robert Costa, Washington Post: “Bush wants to be at the center of this race on his own terms, that’s why he’s moving in early. He doesn’t want to bow to the right his party.”
...
Crawford: “Now, the challenge of Bush is going to be running a center right campaign for the Republican nomination. Jeff, this is a time when the party is enthusiastically embracing more conservative candidates.”
— CBS’s Jan Crawford and the Washington Post’s Robert Costa, CBS Evening News, January 1, 2015.

“You know that we’re facing a fiscal cliff for a combination of reasons, having to do with the Bush tax cuts; having to do with raising the debt ceiling; having to do with some other issues coming late December and early January. You, in testimony before Congress, said that you were okay, as you well know, with $10 of spending cuts for $1 of tax revenue....But are you worried about the direction of your party?”
— CBS’s Charlie Rose’s questions to Jeb Bush on June 7, 2012, CBS This Morning.