Nets Devote Only 11 Minutes to Clinton Foundation Scandals in 2015

While many Americans have by now heard about how former Secretary of State Hillary Clinton chose to bypass her official government e-mail in favor of an account run from a server in her family's Chappaqua home, even avid news consumers may be in the dark about the troubling fundraising and conflicts of interest surrounding the Clinton Foundation.

This week's news of yet another shady donation to the Clinton Foundation, this time by a construction company with close ties to the Chinese government that happens to have a long history of worker abuse, has been largely ignored by the Big Three (ABC, CBS, NBC) networks. Only CBS news reported the latest revelation in the ever-growing fundraising scandal that has just as much potential to hurt Hillary Clinton’s 2016 chances as the more widely reported e-mail controversy.

In fact, the Clinton Foundation scandals have gone largely ignored by the three broadcast networks in 2015, as the swirling controversies have garnered a total of 11 minutes and 13 seconds of airtime on their evening and morning news shows. And the Spanish-language newscasts on Univision and Telemundo have completely ignored the Clinton Foundation 2015 controversies.

ABC has spent zero seconds on the Clinton Foundation this year on its evening and morning shows, although ABC’s Jonathan Karl did manage to squeeze in a question on the topic on the March 1 edition of This Week, the network's Sunday political program. NBC came in a distant second at only 1 minute and 8 seconds. CBS, which broke the Chinese construction company story on Monday, represented the overwhelming majority of that coverage as it has devoted 10 minutes and 5 seconds to the Clinton Foundation scandals.

On the March 16 edition of CBS Evening News anchor Scott Pelley told his audience: “Before Hillary Clinton is even officially in it, another controversy is bubbling up. While she was Secretary of State, the Clinton charitable Foundation stopped, for the most part, taking donations from foreign governments, and it says it will likely do the same again if she runs for president, but what about donations from foreign companies linked to their governments? Julianna Goldman is looking into this.”

Goldman went on to report on the latest controversial donation: “Since its founding, the Clinton Foundation has raised at least $42 million from foreign governments and according to an analysis by CBS News at least $170 million from foreign individuals, organizations and companies....Like Rilin Enterprises a Chinese construction and trade conglomerate that pledged $2 million to the Clinton Foundation in 2013. It's run by billionaire Wang Wengliang who’s a delegate to the Chinese parliament....the company has faced a long history of complaints regarding its treatment of construction workers at its various building sites. Documents show Rilin was cited twice by Jersey City officials for housing workers in crowded conditions....Campaign finance law prohibit foreign interests from investing in U.S. elections, and Scott, the concern is that a donor today could be looking for something in return from a future president.”

But the Rilin Enterprises donation isn’t the only Clinton Foundation controversy to garner attention in 2015. Back on the February 27 Today show, NBC’s Kelly O’Donnell, in one of only two NBC mentions, noted how speakers at the conservative CPAC conference were taking shots at Clinton’s hypocritical pro-women rights stance while her family’s charitable foundation was accepting donations from countries that oppress women.

CARLY FIORINA (Former Hewlett-Packard Chairman and CEO): She tweets about women’s rights in this country and takes money from governments that deny women the most basic human rights.

The only other NBC mention came via Peter Alexander on the March 9 Today show, when he reminded viewers that Clinton had more than just the ongoing e-mail controversy to worry about:  “This latest scandal follows reports that foreign governments donated millions of dollars to the Clinton Foundation while Hillary Clinton served as secretary of state, violating the Obama administration`s ethics agreement. Her husband defending those donations this weekend.”

Even investigations into the Clinton Foundation by liberal newspaper outlets like the Washington Post have failed to prompt the Big Three into a flurry of reports.

On February 26, CBS This Morning was the only network show to report about a shady Algerian contribution: 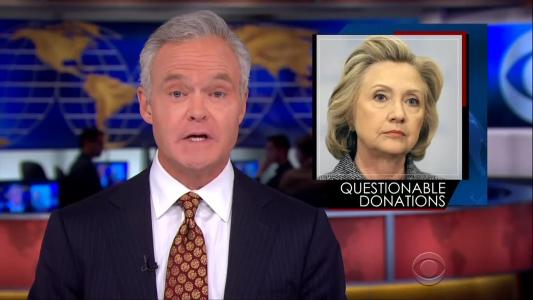 CHARLIE ROSE: The Washington Post reports the Clinton Foundation accepted millions of dollars from seven foreign governments when Hillary Clinton was secretary of state. Officials with the charity group say one donation violated its ethics agreement with the Obama administration. In 2010, the government of Algeria gave half a million dollars to the Clintons’ charity group. The money went for earthquake relief in Haiti. The contribution coincided with an increase in Algeria`s lobbying business to the State Department. Officials from the Clinton Foundation acknowledge they should have sought approval from the State Department.