2015: Will GOP Congress Cooperate with Obama? 2007: Democrats Should Impeach Bush! 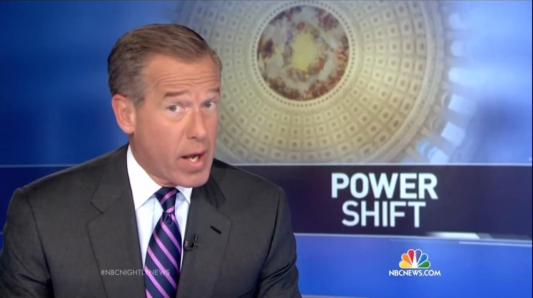 This week the media greeted the new GOP Congress with fears about a conservative “kamikaze caucus,” pushing “confrontation with Obama,” and stressed that if Republicans were to be successful they needed to look less “scary,” as they pointed out the 114th Congress was “80 percent white, 80 percent male and 92 percent of its members are Christian.”

But in 2007, when Nancy Pelosi and the Democrats took over the House, the tone from the liberal media was very different. ABC anchor Charlie Gibson gushed: “The new Speaker was on the floor for a time, holding her 6-year-old [6-month-old] grandson, all the while giving directions on how events were to proceed. It seemed the ultimate in multitasking: Taking care of the children, and the country.”

And instead of fearing gridlock caused by uncooperative partisans, the likes of CNN’s Jack Cafferty were actually encouraging the Democrats to seek “confrontation” with then President George W. Bush: “They’ve already said they won’t impeach President Bush. They’ve already said they won’t cut funding for the war....It’s time for the Democrats to walk the walk...If the Democratic Party refuses to confront this administration in a meaningful way on the issues that are threatening the very survival of our nation, then they’re no better than the people committing these crimes.”

The following is a look at the stark difference in how the liberal media treated the 2007 Democratic Congress then versus how the 2015 GOP Congress is being covered now.

On January 6, the morning of the new Congress being sworn-in, ABC’s George Stephanopoulos warned his Good Morning America audience: “Republicans taking control of both the House and the Senate for the first time in eight years, promising to move fast on their agenda, and that sets up more confrontation with President Obama.” His colleague Jon Karl added: “Not only are Republicans fully in control for the first time under Obama of both the Senate and the House, in the House they have the biggest majority that the Republicans have had in nearly a century. So, yes, look for confrontation, not cooperation.”

Later that night Karl, on ABC’s World News Tonight, fretted: “25 Tea Party Republicans tried to oust [John Boehner] because they believe he has been too easy on President Obama. So, he ultimately won, but what this means, David, is that you have a significant faction of conservatives in the House that are going to be pushing Boehner to be even more confrontational with President Obama.”

That same day NBC’s Luke Russert depicted conservative Republicans who voted against Boehner as suicidal dogs as he tweeted: “Boehner wins Speakership for 3rd term in light of 25 #GOP defections. Never in doubt but the Kamikaze Caucus is alive & barking.”

Back in 2007 MSNBC’s Keith Olbermann and CNN’s Jack Cafferty were actively pushing the newly arrived Democrats to go after Bush. On the January 3, 2007 edition of MSNBC’s Countdown with Keith Olbermann the hot topic was could the new Democratic Congress impeach Bush’s cabinet?

Former Nixon White House aide John Dean: “[The Democrats are] going to have to stand up and find their spine and go toe to toe with these people, or they’re not going to be back in 2008.”
Keith Olbermann: “The far end of what you suggest, obviously, would be impeachment, but the merits of that are at best arguable. I think we can probably both recall an occasion in which impeachment actually bolstered a President’s popularity. But you wrote recently about impeaching not a President or a Vice President, but members of the Cabinet. How would that work? And is it a practical thing?”

And on the January 4, 2007 edition of CNN’s The Situation Room Cafferty offered this impeachment rant: “They’ve already said they won’t impeach President Bush. They’ve already said they won’t cut funding for the war....It’s time for the Democrats to walk the walk, and there’s some early signs they might be coming down with leg cramps. This country’s being ripped apart by an ill-advised war that’s failing, and an executive branch that’s run amuck. If the Democratic Party refuses to confront this administration in a meaningful way on the issues that are threatening the very survival of our nation, then they’re no better than the people committing these crimes. So here’s the question: ‘How much faith do you have that the Democrats can stop the war and rein in President Bush?’”

On the January 6 edition of NBC’s Today show, Peter Alexander laid out the obstacles for the Republicans: “Among incoming Senate Majority Leader Mitch McConnell’s main goals for his party: don’t be scary. Telling the Washington Post, ‘I don’t want the American people to think that if they add a Republican president to a Republican Congress, that’s going to be a scary outcome.’” 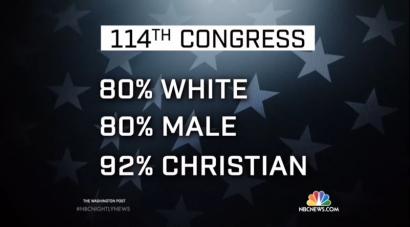 That evening NBC Nightly News anchor Brian Williams made sure to alert his viewers: “The Washington Post has compiled these stats about your new Congress. It’s 80 percent white, 80 percent male and 92 percent of its members are Christian.”

On the bright side CBS This Morning co-anchor Norah O’Donnell, on January 6, actually pointed out that the new Congress “will include the most diverse group in history with a record number of minorities and women.” O’Donnell then went on to interview incoming Republican Elise Stefanik, “the youngest woman ever to serve in Congress.” However, in that interview O’Donnell couldn’t resist asking Stefanik about her party’s image problem: “Someone noted that the Republican Party has wanted to bottle and mass produce candidates like you, young, female and Republican. Does the Republican Party have an image problem?”

Then: Democrats Deliver History-Making Pelosi, Who Will Take Care of Our Country

The first female Speaker of the House was certainly a history-making moment worthy of commemoration but liberal reporters and anchors laid it on a little thick in their celebration of Nancy Pelosi. On the January 4, 2007 edition of ABC's World News, then-anchor Charlie Gibson was awed by Pelosi’s ability to multi-task: “For the first time in the 218-year history of the Congress, a woman was voted by her colleagues to be Speaker of the House. Nancy Pelosi, Democrat from California, took the gavel. But in a picture perhaps even more symbolic, the new Speaker was on the floor for a time, holding her 6-year-old [6-month-old] grandson, all the while giving directions on how events were to proceed. It seemed the ultimate in multitasking: Taking care of the children, and the country.”

That same night, CBS Evening News anchor Katie Couric cheered: “We can’t let this historic day pass without mentioning Susan B. Anthony who fought so hard for the right of women to vote....Now there are a record 90 women in this new Congress, including for the first time ever, the Speaker of the House. Wouldn’t Susan B. Anthony be proud? Or maybe she’d ask, ‘What took so long?’”

A couple of weeks later the Pelosi-hype was still going strong. On January 19, the crew over at ABC’s Good Morning America couldn’t contain their excitement about Pelosi picking up a piece of lint:

Diane Sawyer: “I’m going to tell you what she [Nancy Pelosi] did, I’m willing to bet, no Speaker of the House has ever done in the entire history of the United States of America....We’re walking along with the camera, she looks at the carpet. It has lint on it, little scraps of paper. She can’t stand it. She gets down and cleans the carpet so we could walk. And she looks up at me and says, ‘It’s just the bonus of having a female Speaker of the House.’”
Robin Roberts: “Yeah. Don’t think any of the guys did that. All right, Diane. Have a safe trip back home.”
David Muir: “A clean rotunda on Capitol Hill.”
Roberts: “Got to love it!”

On that same show, Sawyer was impressed at how fast Pelosi was able to get her liberal legislation passed through the House: “Like a freight train, she’s already moved six major pieces of legislation through the House — everything from stem cell to minimum wage. And whatever side you’re on, when this new Speaker moves, she moves fast. Nancy Pelosi says power is not handed to you, you have to know how to win it. When she walks into a room, she is quiet, polite. But her fellow politicians say she’s galvanized steel with a smile.”

The question has to be asked: If Speaker John Boehner and Majority Leader Mitch McConnell quickly push through a vote on the Keystone pipeline, a project that despite President Barack Obama’s veto threats enjoys support among Democrats and labor unions, will the anchors at ABC and the other networks celebrate their speedy efficiency in the same way they cheered Pelosi and the Democrats in 2007?