Curtains Down! Here’s Just a Few of the Top Moments From The Psaki Show 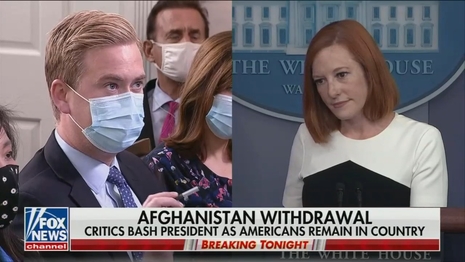 Friday marked the end of an era with White House Press Secretary Jen Psaki departing the Biden administration after over 200 editions of The Psaki Show, filled with humorous and tense moments. Simply put, Psaki was effective in having served as the chief spin officer and lying propagandist for President Biden amid a litany of crises as he himself has spent much of his presidency hiding from sustained questioning.

Hired away from CNN, Psaki is poised to move to MSNBC and NBCUniversal’s streaming platform Peacock, which itself has been wrought with ethical concerns.

Fox’s Peter Doocy became a household name alongside Psaki for their many exchanges on everything from hot dogs to horses to inflation to sex ed in schools. As we’ve coined it here at NewsBusters, Doocy Time was appointment viewing for the Fox correspondent’s uncanny ability to ask questions the liberal journalists around him weren’t asking and in a way that was brief, respectful, and tough.

And yes, we even saw times when liberal network reporters like CBS’s Weijia Jiang and Ed O’Keefe tested Psaki.

Below represents the 15 moments from Psaki’s tenure, presented in chronological order.

Psaki showed her condescending side on this particular day when Bloomberg’s Josh Wingrove wanted to know “whether the President has made a decision on keeping or keeping the scope of the Space Force?”

Psaki committed a faux pas when she mocked it as “the plane of today” topic, which dated back to the first briefing and a question about former President Trump’s plans to redesign Air Force One.

Wingrove hit back, noting it’s not just any question because “it’s an entire branch” of the military. This led Psaki to later engage in some cleanup.

The first of seven entries highlighted from our year-end Best of Doocy package, the Fox correspondent drew Psaki’s ire for asking “when” and “where” laid off fossil fuel workers could “go for their green jobs” once the administration fully implemented its green agenda.

The first #BidenBorderCrisis reared its head only a month into the President’s tenure with Psaki falsely claiming the housing of illegal immigrants was being done with respect and not in cages. But as Doocy noted on that particular day, it was a lie.

With the administration still refusing to acknowledge reality, Doocy questioned whether they’ve preferred partnering with the teachers unions (to keep schools closed) over the angry and overtaxed Border Patrol and HHS unions. Psaki chuckled at his question, leading the affable Doocy’s face to turn red and show a brief moment of anger: “It’s not funny.”

Before jetting off to the evil empire at CNN, Fisher had a slew of briefings where she fired off hardballs at Psaki with this particular day perhaps having been the most intense. The border crisis was only growing worse and Fisher merely wanted to know if there would be a cap on the number of illegal immigrant children allowed to stay in the United States.

Instead of answer it, Psaki rudely asked Fisher: “Should we send some kids who are 10 back at a certain point? Is that what you’re asking me?”

One of Psaki’s worst lies took place over the summer when she tried to claim Republicans (and not Democrats) are the party supporting the defunding of police because they wouldn’t support Biden’s COVID-19 stimulus package.

Doocy pressed her to name a Republican who opposed the boondoggle “because they wanted to defund the police” and when Psaki stuck to her falsehoods, Doocy hammered home the point by citing statements from lead Republicans and support for defunding the police from Democrats.

By early 2021, inflation had already wrestled control of the country and the White House fired off one of the most tone-deaf tweets one will ever find as it bragged that a Fourth of July cookout supposedly cost less than it had in the past.

Doocy noticed the blowback and he took the uproar straight to Psaki, including the tweet’s thesis that celebrated a 16-cent drop an average cookout’s cost.

8. August 31, 2021 — Psaki Runs into Buzzsaw of WH Reporters After Biden Cuts and Runs After Speech

The collapse of Afghanistan served as a rare moment in which Psaki found out what it was like to be a Republican press secretary on a daily basis with a barrage of hard-hitting questions about the Biden administration’s failed pull-out that, in the end, costs 13 American lives and left dozens more injured.

On this particular day, ABC’s Stephanie Ramos asked whether the White House was “placing blame on Americans who could not get to the airport in time” and just how “confident is the administration that Afghanistan isn’t already a safe haven for terrorists.”

To show how bad things were, American tax dollars were, for a few seconds, well spent as NPR’s Franco Ordoñez questioned whether “really fair...for [Biden] to say that [people] didn’t leave” Afghanistan “when they had the chance” given the fact that the situation on the ground wasn’t “safe and organized.”

9. September 8, 2021 — Doocy Throws Down With Psaki Over Leaving Americans Behind in Afghanistan

By this point, reporters had admirably been on Psaki’s case for weeks about Americans left behind in Afghanistan and this briefing was no exception with Doocy calling out the administration’s rhetorical shoulder shrugging as to what help they could provide.

Doocy also had this stinging, big picture question his colleagues wouldn’t ask: “There are now more terrorists wanted by the FBI in the new Afghan government than there are women. Does the President think that is a foreign policy success?”

The #BidenBorderCrisis reached another peak in the late summer/early fall with almost apocalyptic scenes from the border. Given the serious nature of the moment, Doocy merely wanted to know whether Biden had even visited the border and then if he would in the future.

DOOCY: Just one more. Has President Biden ever been to the southern border?

PSAKI: In his life?

PSAKI: I will have to get — look back in my history books and check the times —

PSAKI: — he's been to the Southern border.

DOOCY: — we have been looking all morning and we cannot find any record of him visiting the border as President, Vice President, senator, or even as a concerned citizen. Why would that be?

PSAKI: I can check and see when the last time or when he may have been.

PSAKI: — tell me more about why you're asking.

DOOCY: Because this is a president who makes the point when there are disasters in this country like a wildfire or a hurricane to go and see for himself firsthand what the needs are of the local communities so that he can have an informed POV to make policy. Why doesn't he do that? Why doesn't he go down at Del Rio, Texas and see what's going on?

PSAKI: Well, first of all, Peter, I think the situation at the border is the result of a broken system, and the President certainly relies on his experience. So, whether it was the work he did to address root causes as Vice President, His efforts when he was in the Senate to support comprehensive immigration reform, steps that at a time or being done and work toward in a bipartisan way, something that certainly we think should be the case today, he uses all of his experiences to inform how he governs, how he approaches challenges, and certainly, he looks, again, at the last four years and the separation of children who were ripped from the arms of their parents as the way he does not want to proceed. So all of his experiences and his time in office, whether Vice President or Senate, inform his approach to issues.

Similar to Doocy, Nelson had a penchant for asking questions that were both substantive and off the beaten path of the liberal journalists (who often asked boring, pedantic process questions) on everything from China to Hunter Biden to marijuana.

Nelson brought a series of Hunter questions to the room coinciding with the release of colleague (and MRC Bulldog Award winner) Miranda Devine’s book Laptop From Hell. As we wrote at the time, his questions about Hunter divesting from a Chinese investment fund, whether Hunter’s infamous laptop was real “and not Russian disinformation as you seemed to suggest,” but Psaki was disgusted with the topics.

Psaki even trashed Devine, saying she had “neither had the time nor interest in exploring or reading the book.”

Stepping up into a more consistent role in briefings, Heinrich dropped what Cable News Watch on Twitter has often called the Jaq Hammer in pressing Psaki on why Biden snapped at her and said debate over sanctioning Russia over what would become a full-fledged invasion of Ukraine was “stupid.”

Heinrich also called out what would become a failure of the world to stop the war, inquiring with Psaki about whether the administration would view it as “a black mark.”

Just days before Russian dictator Vladimir Putin ordered his troops to invade a sovereign Ukraine, Heinrich attempted to give the White House a gut check by wondering whether Team Biden’s strategy was “working.”

Psaki naturally said they were having success in standing up to Putin, so Heinrich stated things plainly: “You're waiting for people to die before implementing them in that case.” Psaki was not amused, calling that “in no way a fair statement or accusation, I guess, if that's what that is.”

Lawrence played an instructive role in this briefing as he forced Psaki to defend the fact that gas prices have gone up every month since Biden took office and, given inflation and the war in Ukraine, how can the administration still demand Americans move away from gas-powered cars.

Doocy came up later and he noted the change in tone on what/who was to blame for inflation with it shifting from COVID-19 to Putin.

Nine days ago, Doocy put Psaki in the position of defending this newfound world of allowing biological men to compete in women’s sports as a way of “protect[ing] the dignity and identity of all Americans.”

Doocy also brought up Florida’s parental rights bill forbidding the teaching of topics concerning sex through the third grade and if the White House had a view on when it was appropriate for young children to be taught explicit material.

Psaki didn’t hesitate to lash out and show the administration’s support for such a heinous worldview, arguing those opposed to teaching sex to children in early elementary school are “propagating misinformed, hateful policies.”