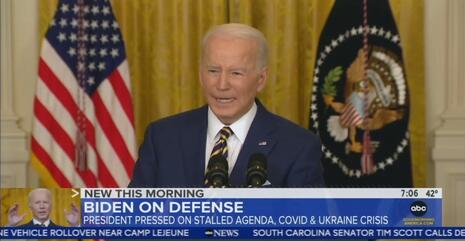 ABC’s Good Morning America decided on Thursday it wouldn’t share with viewers one of the top takeaways from President Biden’s marathon Wednesday press conference, which was that he signaled he would wage a campaign to delegitimize and question the results of November’s 2022 midterm elections if he doesn’t get his way on voting rights.

ABC covered Biden’s press conference, the crisis in Ukraine, and said battle in Congress over his so-called voting rights agenda for 15 minutes and 30 seconds, but gave only cursory overviews of where things stood with the exception of his gaffe appearing to have given Russia a green light for invasion in Ukraine and less of a response so long as it was just a “minor incursion.”

“Of course, the President defended his record in a marathon press conference before the vote which covered all the major issues facing the White House,” stated co-host and former Clinton flack George Stephanopoulos.

Senior White House correspondent Mary Bruce focused on her exchanges with Biden, stating off the top that Biden “was grilled on his first year in office” as “[h]e highlighted his accomplishments, but with his top legislative priorities still stalled in Congress and poll numbers lagging, the President was also forced to play defense and admit he is going to have to make some changes.”

Always the stenographer, Bruce even treaded lightly on Ukraine:

And as tensions with Russia rise, the President making news, predicting Vladimir Putin will invade Ukraine, but Biden raising questions over how the U.S. and European allies will respond.

In the 8:00 a.m. Eastern hour, she added that he’s “adamant...he did not overpromise to the American people on what he could deliver as President but he did say he was caught off guard by how much Republicans are opposing him.”

While their interview with Vice President Kamala Harris was similarly bland and unmemorable as ABC’s, CBS Mornings was less generous when it came to Biden undermining our electoral system.

White House correspondent Ed O’Keefe made a point of it at the top of his report (click “expand”):

GAYLE KING: Ed, it was one of the longest new conferences people have seen. Clearly, he had a lot to say. Good morning to you.

O’KEEFE: He sure did. Gayle, good morning. He took dozens of questions on issues from the pandemic to the future of his legislative agenda. But on that issue of voting rights, he became the second consecutive American president to raise concerns out future election results. During his news conference, President Biden was asked if he believes this year's elections will be fairly conducted and the results legitimate given that his voting reform bill didn't pass.

BIDEN: Well, it all depends on whether or not we're able to make the case to the American people that some of in is being set up to try to alter the outcome of the election. [SCREEN WIPE] I think you're going to see the people will try to keep from being able to show up showing up and making the sacrifice.

And later in the show, Dispatch founder and former Weekly Standard editor-in-chief Steve Hayes hammered Biden setting up a dangerous narrative that a possible GOP Congress would be illegitimate.

TONY DOKOUPIL: Steve, the President, his inaugural address promised to be a unifier for the country. He campaigned that way, as well. Unfortunately for the administration, people seem to be unifying around disapproval at the moment. Do you think that press conference changed the narrative In any way?

HAYES: I don't...[H]e raised as many questions as he answered...[H]is comment about a minor incursion by the Russians into Ukraine. You saw immediate reaction from overseas, particularly in Kiev where officials said, boy, that seems like a green light for Vladimir Putin. You also had the President's comments on the possibility of an illegitimate election in 2022, when he was asked a question about whether — if these voting reforms that have been debated in Congress don't pass, that would contribute to the illegitimacy of the 2022 elections. I think the right answer would be to reaffirm the strength of our electoral system while, you know, expressing disappointment that the reforms were unlikely to pass. Instead he said, yeah, it's possible that the 2022 elections could be illegitimate, which I think is not what we need, whether you're a Republican, Democrat, liberal, or conservative.

KING: I know. Steve, how is that helpful, and doesn't that sit up a tit for tat dynamic that I think is troubling on many issues?

HAYES: Yeah. I mean, I think it's worrisome. I mean, look, if you're a conservative and you've got questions or problems with the way that Donald Trump conducted himself in the aftermath of the 2020 election, lying about whether the election was stolen, trying to remain in office, what his supporters have been doing in states and localities across the country to — to basically put themselves in a position where they could muscle through an illegitimate election. The last thing you wanted to hear was to hear from President Biden that there are questions about the legitimacy of the elections. You needed the President to say, no, we've got the best electoral system in the world —

HAYES: — the safest, the most secure and one thing we don't need to worry about — even if I'm frustrated that Republicans aren't supporting me on these voting reforms, the one thing we can be sure of is that elections are legitimate.

On NBC’s Today was more fleeting than CBS in mentioning Biden’s erroneous claim, but still did more than ABC.

With the voting rights push hitting a dead end, President Biden was asked whether this years midterms would be fairly conducted and legitimate after many Republican-led states enacted new voting restrictions.

On Ukraine, they were far tougher with co-host Hoda Kotb saying in a tease he “stirr[ed] controversy” with Alexander reporting it was “perhaps the most explosive topic” as what Biden told reporters “sent White House aides scrambling to clarify before the news conference even ended.”

Co-host Savannah Guthrie called it “the unintentional headline” Biden “created,” but Meet the Press moderator Chuck Todd was less convinced as it was more “a gaffe of honesty” due to a lack of consensus in Europe about standing up to Russia seeing as how they deeply rely on Russia for heat.

ABC’s bias by omission was brought to you by advertisers such as AARP and GoDaddy. Follow the links to see their contact information at the MRC’s Conservatives Fight Back page.

To see the relevant transcripts from January 20, click here (for ABC), here (for CBS), and here (for NBC).