On Wednesday, ABC’s World News Tonight and NBC Nightly News neglected to cover two separate stories on the business and news media fronts as Al Jazeera America announced that it will cease operations in April while General Electric made clear that it will move its headquarters to Boston after 41 years in Connecticut because of high taxes.

Pelley also explained in the first brief that the company’s traditional “Arabic language channel has a reputation for being anti-American” (which could be argued is vast understatement).

According to other news reports, the move will cause up to 700 people to lose their jobs at the low-rated channel that launched to much fanfare from the liberal press in 2013.

As NewsBusters has chronicled, the network became known for it’s hostility to victims of the 2015 Charlie Hebdo Islamic terror attacks while another Al Jazeera channel known as Al Jazeera English was exposed last year for telling it’s employees that terms such as “extremist,” “Islamist,” “militant,” and “terrorist” were prohibited from being used in their news coverage.

Turning to G.E., Pelley explained in the second brief (that lasted 14 seconds): “Also in business news today, General Electric said its corporate headquarters will be leaving Connecticut after 41 years and heading up to Boston. GE blamed an increase in Connecticut business taxes.”

Here’s more on the move from The Boston Globe:

The decision marks the end of a high-stakes competition to woo GE from its longtime campus in suburban Connecticut, besting New York, Providence, and other cities, and further solidifies the region’s reputation as a magnet for innovation.

GE said it will have roughly 800 people in Boston: 200 from corporate staff and 600 digital industrial product managers, designers and developers split among various divisions.

It’s a major victory for Governor Charlie Baker and Mayor Martin J. Walsh, whose aides worked closely together for several months to lure GE to a city that has seen many of its biggest companies swallowed up by out-of-town buyers, and a state that has labored hard to shed the “Taxachusetts” label pinned on it during the 1970s.

The transcript of the briefs on the CBS Evening News with Scott Pelley on January 13 can be found below. 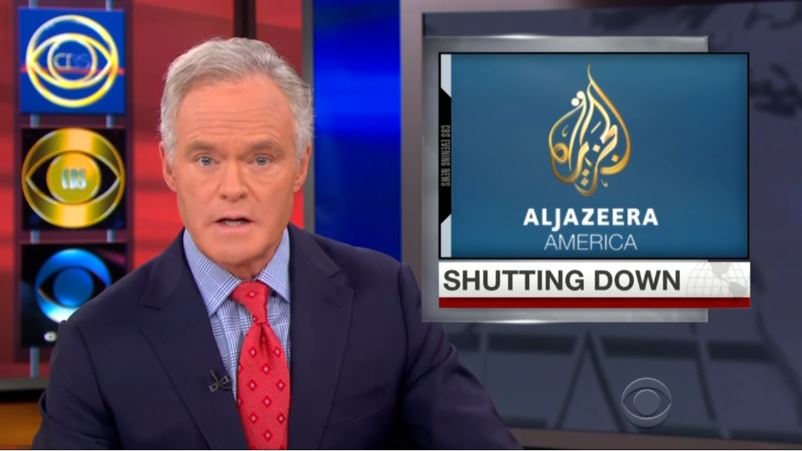 SCOTT PELLEY: Slumping oil prices are one reason the oil-producing nation of Qatar is shutting down the cable news channel Al Jazeera America. Al Jazeera's Arabic language channel has a reputation for being anti-American.

Also in business news today, General Electric said its corporate headquarters will be leaving Connecticut after 41 years and heading up to Boston. GE blamed an increase in Connecticut business taxes.