On Saturday, the “big three” networks of ABC, CBS, and NBC continued to prove why the liberal media loves congratulating itself for their so-called accomplishments as the morning and evening newscasts spent nearly four minutes (without teases) cheering the “historic” decision by The New York Times to publish a “dramatic” front-page editorial chiding gun rights advocates and pushing for massive gun control/confiscation.

The lovefest started bright and early with NBC’s Today touting the editorial in an opening tease followed by two news briefs with the briefs totaling 57 seconds.

Applauding the “outrage” was co-host Sheinelle Jones as she hyped that the paper “slammed the gun industry and the politicians who back them” while co-host Craig Melvin hailed the “rare sight” as one that attacked “the gun culture in America.”

Later in the show, Jones offered the second brief in which she described The Times editorial as “a dramatic stand on gun control....calling it a national disgrace that people can legally purchase weapons designed specifically to kill.”

Devoting a two-minute-and-23-second report to the editorial was CBS This Morning: Saturday, with co-host Vinita Nair explaining that:

It calls for certain types of assault rifles and ammunition to be outlawed, saying they are “weapons of war.” It lashes out at elected leaders opposed to new gun restrictions, saying, quote, those politicians “abet would-be killers by creating gun markets for them.” The editorial is likely to stir up more debate in the presidential campaign.

Nair added that the liberal paper “chastise[d]” Republican presidential candidates like Ted Cruz and Marco Rubio for not supporting Democratic-proposed bills in the Senate while also giving Democrat Hillary Clinton credit for “[taking] the Senate to task during a campaign event.” 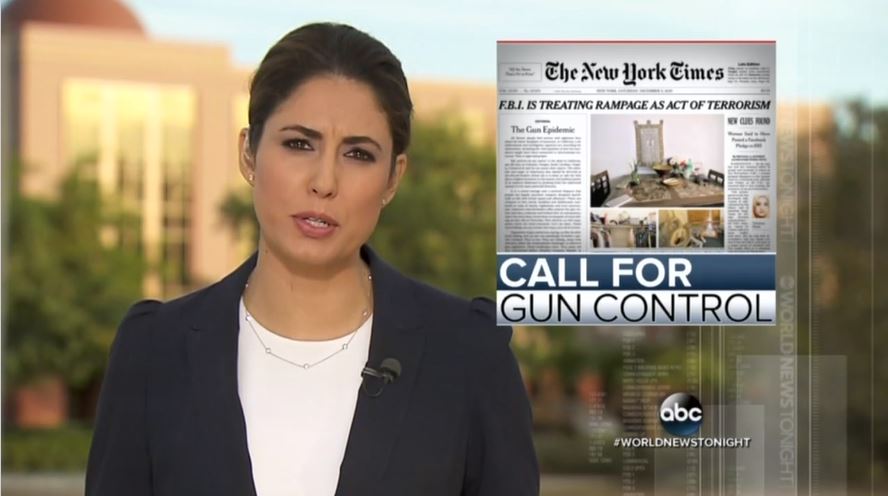 After ABC’s Good Morning America made no mention of the editorial, ABC’s World News Tonight made sure to make up for it as Saturday anchor Cecilia Vega gushed over the “front-page outrage” with “[t]he major newspaper calling gun control in America a national disgrace.”

The CBS Evening News was off as the network aired the SEC Championship Game, but NBC Nightly News was shown and mentioned the paper “taking a stand” with fill-in anchor Kristen Welker reading a 14-second brief promoting the decision.

As National Review’s Jonah Goldberg and many others pointed out, the paper selected an editorial advocating for the surrender and confiscation of firearms from law-abiding Americans as the subject of its first front-page take since 1920 instead of these major world events that came within that time span:

The Peace of Versailles, Buck v. Bell, the Great Depression, Pearl Harbor, the Hitler-Stalin Pact, the Ukrainian famine, the internment of Japanese-Americans, the Tuskegee experiments, the Holocaust,  McCarthyism, the Marshall Plan, Jim Crow, the Cuban Missile Crisis, the Kennedy Assassination, the 1964 Civil Rights Act, Kent State, the Gulf of Tonkin Resolution, Watergate, withdrawal from Vietnam, the Killing Fields, the Iran hostage crisis, the Contras, AIDS, gay marriage, the Iran nuclear deal: These are just a few of the things the New York Times chose not to run front page editorials on.

Goldberg’s excellent post (which this writer high recommends) also admitted that not only is The New York Times editorial not well-composed, but it ducked a number of facts too:

[Y]ou’d think there would be an actual gun epidemic to justify this break from precedent. Gun murders, as Charlie Cooke keeps pointing out, keep going down. That is not to say that the prevalence of spree or mass killings isn’t a serious issue. Such slaughters, separate and apart from the Islamist threat, are extremely troubling and both parties should do more to address them. But given that gun ownership has skyrocketed while gun homicides have gone down, it’s hard to see how the premise of the editorial — never mind its nearly unprecendented placement — can be defended.

Third, while I have no doubt the authors are sincere in their desire to mount a national movement against guns (I also have no doubt they’ll fail), it is impossible to read this as anything other than an attempt to change the subject in the face of all the facts we learned today.

The relevant portions of the transcript from CBS This Morning: Saturday on December 5 can be found below. 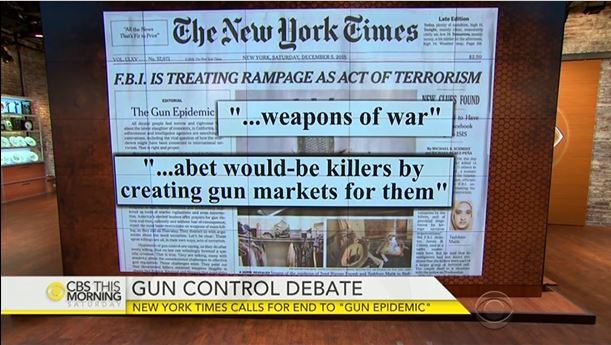 ANTHONY MASON: The shooting prompted The New York Times to do something this morning it doesn't in nearly a century. For the first time since 1920, The Times published an editorial on its front page. The title is “End the Gun Epidemic in America.”

VINITA NAIR: It calls for certain types of assault rifles and ammunition to be outlawed, saying they are “weapons of war.” It lashes out at elected leaders opposed to new gun restrictions, saying, quote, those politicians “abet would-be killers by creating gun markets for them.” The editorial is likely to stir up more debate in the presidential campaign.

NAIR: Texas Senator Ted Cruz refused the back down on his support of gun rights while campaigning at an Iowa firing range on Friday. Joining in that sentiment was Florida Senator Marco Rubio, who says those calling for stricter gun laws are off base

NAIR: This week, Rubio and Cruz voted to block a Senate bill that would expand background checks on purchases. In today's editorial, The New York Times chastises the vote, saying elected leaders quote, “distract us with arguments about the word terrorism” and that shootings like San Bernardino, Sandy Hook and the Colorado movie theater “are all, in their own ways, acts of terrorism.” Democrat Hillary Clinton took the Senate to task during a campaign event.

NAIR: The Times editorial board suggests assault rifles, such as the one used in San Bernardino, should no longer be sold and that Americans who own them should be required to give them up. Speaking at a campaign rally in Raleigh, North Carolina before the editorial was published, Republican front runner Donald Trump said he would protect the Second Amendment.