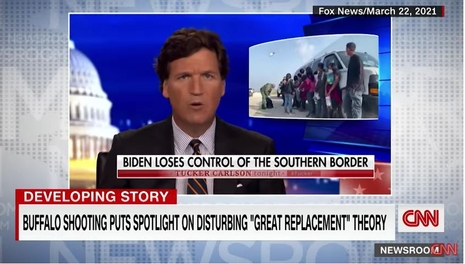 Nicholas Confessore was the author of the vast New York Times smear on Fox News host Tucker Carlson earlier this month, in which he crowned Carlson’s show “the most racist show in the history of cable news.”

Confessore eagerly brought the same nasty energy to blame Carlson for Saturday’s mass killing at a Buffalo supermarket by a murderer who apparently targeted black victims. Confessore and graphics editor Karen Yourish were joined by five other contributing reporters on the front of Monday’s Times: “Creeping Into the Mainstream, A Theory Turns Hate Into Terror.”

Confessore tried to link the entire Republican Party to the killings.

….replacement theory, once confined to the digital fever swamps of Reddit message boards and semi-obscure white nationalist sites, has gone mainstream. In sometimes more muted forms, the fear it crystallizes -- of a future America in which white people are no longer the numerical majority -- has become a potent force in conservative media and politics, where the theory has been borrowed and remixed to attract audiences, retweets and small-dollar donations.

So what did Fox News and Tucker Carlson have to do with this? Not much, at least according to Confessore in this paragraph. But the Republican Party was still blameworthy for "remixing" and "sanding down" the racism:

By his own account, the Buffalo suspect, Payton S. Gendron, followed a lonelier path to radicalization, immersing himself in replacement theory and other kinds of racist and antisemitic content easily found on internet forums, and casting Black Americans, like Hispanic immigrants, as “replacers” of white Americans. Yet in recent months, versions of the same ideas, sanded down and shorn of explicitly anti-Black and antisemitic themes, have become commonplace in the Republican Party -- spoken aloud at congressional hearings, echoed in Republican campaign advertisements and embraced by a growing array of right-wing candidates and media personalities.

No public figure has promoted replacement theory more loudly or relentlessly than the Fox host Tucker Carlson, who has made elite-led demographic change a central theme of his show since joining Fox’s prime-time lineup in 2016. A Times investigation published this month showed that in more than 400 episodes of his show….

Confessore himself -- a regular MSNBC political analyst -- was the proud author of the hit piece he described above.

The man who shot five congressmen at an Alexandria ballfield in 2017 was a fan of MSNBC host Rachel Maddow, but don’t hold your breath for the Times to make that point.

Even mainstream border control issues, like Republican opposition to granting amnesty to illegals, were dangerously fringy. Confessore attacked Rep. Elise Stefanik for a Facebook ad claiming amnesty for illegal immigrants  would “overthrow our current electorate and create a permanent liberal majority in Washington."

It's no conspiracy theory to think Democrats want more immigrants allowed into the United States and to eventually give them the vote, expecting them to vote for the party who granted them citizenship. It’s certainly not an embrace of “replacement theory" to think so.

Measuring the extent of Mr. Carlson’s influence in spreading replacement theory may be impossible. But controversies around the host’s use of “replacement” rhetoric appear to have at least helped drive public curiosity about the idea….

The Buffalo suspect appears to have immersed himself on web forums like 4chan and 8chan, where versions of replacement theory abound….

Wait, so the killer wasn’t a Fox News fan? Tucker Carlson wasn’t even mentioned in the killer’s 180-page manifesto, a fact we learn in paragraph 26.

Mr. Carlson’s replacement rhetoric comes without the explicitly antisemitic elements common on racist web platforms. There is no indication that the Buffalo gunman watched Mr. Carlson’s show, or any other on Fox, and Mr. Carlson has denounced political violence even as he fans his viewers’ fears.

But there are also notable echoes between Mr. Carlson’s segments and the Buffalo suspect’s long litany of grievances, reflecting the blurry boundary between internet-fueled griping and lines of attack now common in conservative media and politics.