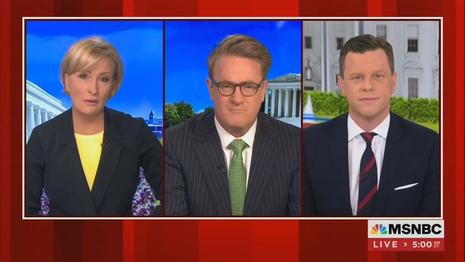 The headline is certainly West Coast-snooty: “MSNBC’s ‘Morning Joe’ tries to keep cable news smart while expanding to four hours.” The story’s premise – that Morning Joe plays it down the middle -- was just wacky.

(The profile appeared in the LA Times earlier in April and in the Orlando Sentinel April 10.)

Battaglio conducted a chatty interview via Zoom as the three hosts joked about what sort of people would be watching their show at 3 a.m. on the West Coast. Yet Battaglio evaded discussing the program’s liberal slant, posing the show’s constant stream of anti-Republican and anti-Trump tirades as “thoughtful discussions.”

The expansion will maintain the defining characteristics of “Morning Joe” -- lively, thoughtful discussions about the political topics of the day often with heavyweight Washington guests -- while steering clear of what Brzezinski, 54, calls the “shock opera” style that cable news opinion hosts have adhered to in prime time.

Battaglio even spun the show’s third-place showing in its time slot among 25-54 year-olds, behind Fox News’ morning offering Fox & Friends and even CNN’s New Day. It’s quality, not quantity (but will that  appease ad-buyers?).

….But Scarborough, Brzezinski and Geist know from texts and phone calls they receive after every show that influential people, especially in Washington, watch regularly. The program shows up on screens at the congressional gym and on government jets….

The LA Times writer plugged Morning Joe as both more financially successful and more diverse than its time-slot competition:

Nielsen data shows the “Morning Joe” audience is more upscale than the competition as 30% of the homes watching earn more than $125,000 a year, compared with 29% for CNN’s “New Day” and 27% for “Fox & Friends.” “Morning Joe” also has the most Black viewers of any cable program in its time period.

This was the laugh line:

“Morning Joe” largely manages to stay in a neutral zone. Scarborough says he doesn’t even know how Geist has voted in presidential elections since they have worked together….

Scarborough’s own political leanings were known to the audience as he came to MSNBC after a career in Congress, where he was elected as part of the Republican Revolution in 1994. After leaving the House of Representatives in 2001, he joined MSNBC in 2003 and served up conservative outrage in prime time for MSNBC for four years before moving to the morning.

Perhaps a result of the more progressive slant of MSNBC in recent years, Scarborough often gets told by longtime fans that he is no longer a conservative. “It’s not me, it’s you,” he says he often tells them and cites Trump as the reason. In 2017 he left the Republican party and registered as an independent.