As the situation in Afghanistan becomes only more grim, the New York Times is properly condemning the Biden Administration’s lack of foresight and criticizing Biden’s false statements regarding the US evacuation. 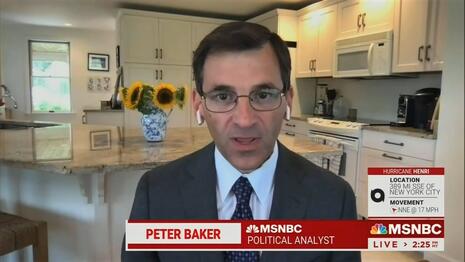 Saturday’s front page featured a “news analysis” from Peter Baker, which suggested Biden’s botching of the Afghanistan pullout might damage his electoral selling points: “A Presidency And Its Values Put to the Test.”

Baker led with this pungent line:

For most of the last week, in the fires of the worst foreign policy crisis of his young administration, the president who won the White House on a promise of competence and compassion has had trouble demonstrating much of either.

The chaos in Kabul and his own conflicting messages have left President Biden struggling to assert command over world events and seemingly more intent on washing his hands of Afghanistan than expressing concern over the humanitarian tragedy unfolding on the ground.

Baker or his editors had to put the "seemingly" before "at odds with reality."

As he has all week, Mr. Biden made assertions seemingly at odds with reality. His description of a smoother evacuation contrasted with the continuing confusion at the Kabul airport, where flights were halted for hours on Friday until they resumed late in the day. His claim that there was “no question of our credibility” with NATO allies belied the deep frustration in European capitals. And while Mr. Biden hailed the “degree of precision” of the operation, he could not say how many Americans were still in danger.

Those comments came after other suspect statements earlier in the week….

At points, the president has evinced little sense of the human toll as the Taliban swept back to power. Asked about pictures of fleeing Afghans packed into planes and some even falling to their death after trying to sneak aboard, Mr. Biden interrupted. “That was four days ago, five days ago,” he said, when in fact it was two days earlier and hardly made less horrific by the passage of a couple of sunsets. 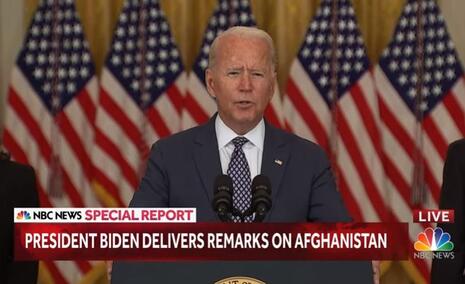 The paper’s fact-checker Linda Qiu also had a story in Saturday’s paper, under an extremely mild headline, “Clarifying Biden’s Take of Evacuation.” (What? No “LIES!” from Biden, like the paper would no doubt say if Trump had behaved in similar fashion?). Qiu’s actual fact-check of three of Biden’s Afghanistan claims was decent.

A large story posted on Saturday with multiple bylines, seemingly positioned for the Sunday front page, “How the U.S. Informed a Crisis in Afghanistan,” was also damning, accompanied by many heartbreaking photos.

Four months later, the plan is in shambles as Mr. Biden struggles to explain how a withdrawal most Americans supported went so badly wrong in its execution….

One damaging anecdote showed Biden in brag mode in early July, “in an ebullient mood, gather[ing] a small group of reporters to celebrate new jobs numbers.” Instead he was peppered with questions about the U.S. abandoning Bagram Air Base without telling the Afghans.

But as the questions persisted, on Afghanistan rather than the economy, he grew visibly annoyed….for the first time, he was pressed on what the administration would do to save Kabul if it came under direct attack. “I want to talk about happy things, man,” he said….