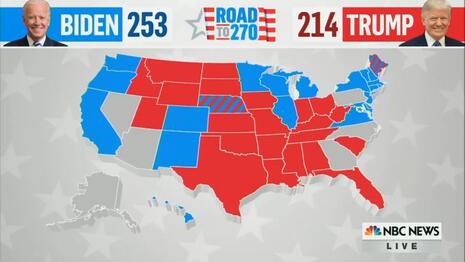 The New York Times got ahead of itself in more ways than one over Election 2020. On the afternoon of Election Day, the paper was obliged to delete a tweet that arrogantly stated “the role of declaring a winner of the presidential election falls to the news media….”

Um, no, that would be the job of the Electoral College, as worked out among the individual states, though the press would surely love to think of themselves as that powerful.

The Times joined the “Biden blowout” brigade around a month ago with increasingly confident predictions of an Electoral College “landslide” by Joe Biden, perhaps even over 400 votes in the Electoral College, out of a possible 538. While the election winner is still up in the air as of Wednesday evening, Biden won’t be getting close to that figure

The day after Election Day, in an early print edition in which few of the night’s results were registered, Matt Flegenheimer praised Joe Biden in “Dueling Ideas Of a President And a Country” (click “expand”):

From the start of his 2020 campaign, Joseph R. Biden Jr. insisted that President Trump was an aberration, his norm-breaking, race-baiting tenure anathema to the national character.

And at the end of the 2020 campaign, an anxious, quarrelsome country seemed to be turning a question back at him: Are you sure?
….

Last week in Texas, vehicles with Trump flags and signs surrounded a Biden-Harris campaign bus and appeared to be trying to slow it down and force it to the side of the road.

Mr. Trump called the drivers supporting him “patriots” who did nothing wrong. The F.B.I. said it was investigating. Mr. Biden sounded something like a disappointed parent, waiting for the collective tantrum to pass.

“We are so much better than this,” Mr. Biden said over the weekend. “It’s not who we are.”

For better or worse, he seemed to believe it.

Maybe one day, childish America will be good enough to deserve a leader like Joe Biden. (Hot Air has a fuller account of the Texas incident from a source less inclined to blame everything on Republicans).

Reporter Shane Goldmacher made the front page Election Day morning with “A Nation Faces a Torrent of Problems, No Matter Who Wins.” who had this overly hearty prediction: “The widening map had some Democrats coveting not only victory on Tuesday but also a landslide repudiation of Mr. Trump and his brand of Republicanism.” That's not quite what happened.

Dissenters from the Trump-is-toast line were treated dismissively, even if they were right in 2016: Tuesday morning’s piece by Giovannia Russonello and Sarah Lyall was a snarky profile of Robert Cahaly of the Trafalgar Group, which most accurately forecast Trump’s shocking win in 2016: “As in 2016, a Contrarian Pollster’s Mysterious Surveys Suggest Trump Will Win.”

But most outlandish was this October 21 front-page headline over a story by Astead Herndon: “A Biden Landslide? Some Democrats Can’t Help Whispering”:

For some Democrats, Mr. Trump’s attention to red states is also a sign of something else -- something few in the party want to discuss out loud, given their scars from Mr. Trump’s surprise victory in 2016. It’s an indication that Mr. Biden could pull off a landslide in November, achieving an ambitious and rare electoral blowout that some Democrats think is necessary to quell any doubts -- or disputes by Mr. Trump -- that Mr. Biden won the election.