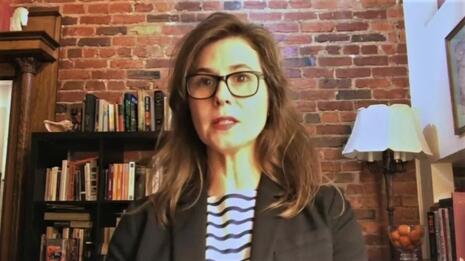 WASHINGTON -- When President Trump flies to California on Monday to assess the state’s raging forest fires, he will come face to face with the grim consequences of a reality he has stubbornly refused to accept: the devastating effects of a warming planet.

To the global scientific community, the acres of scorched earth and ash-filled skies across the American West are the tragic, but predictable, result of accelerating climate change. Nearly two years ago, federal government scientists concluded that greenhouse gas emissions from burning fossil fuels could triple the frequency of severe fires across the Western states.

But the president has used his time in the nation’s highest office to aggressively promote the burning of fossil fuels, chiefly by rolling back or weakening every major federal policy intended to combat dangerous emissions. At the same time, Mr. Trump and his senior environmental officials have regularly mocked, denied or minimized the established science of human-caused climate change.

After lamenting that Obama’s climate change regulations….are in shambles” after Trump administration regulatory reforms (while skipping China, the world’s largest polluter), the reporters scorned the lack of American leadership on “climate change,” an idea the paper assumes to be an unassailable scientific reality.

Tuesday’s lead story slot was also filled with the California fires, as a way to singe Trump’s re-election campaign: “Spurred By Fires, Trump and Biden Clash On Climate – Denialism vs. Science – President Blames States – Rival Calls Him an ‘Arsonist.’” 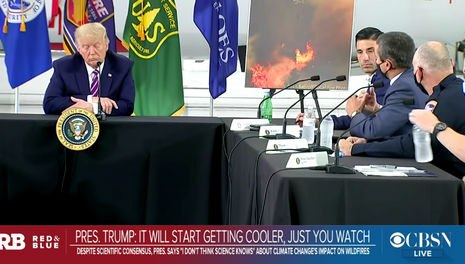 Reporters Peter Baker, Lisa Friedman, and Thomas Kaplan didn't lunge to "fact check" Biden tarring Trump as an arsonist, as they would surely do if Trump had name-called Biden.

With wildfires raging across the West, climate change took center stage in the race for the White House on Monday as former Vice President Joseph R. Biden Jr. called President Trump a “climate arsonist” while the president said that “I don’t think science knows” what is actually happening.

In other words, Biden's brickbat was sensible, while Trump sounded like he opposed science.

Some environmental specialists said that Mr. Trump had a point about forest management but that it should not be an excuse to deny climate science and refuse to take action.

“Raking the leaves and forest floors is really inane. That doesn’t make sense at all,” said Ralph Propper, the president of the Environmental Council of Sacramento. “We’re seeing what was predicted, which is more extremes of weather.”

The Times liked the snotty (and scientifically dubious) quote above so much it made it a text box. They closed by citing a Republican analyst who insists opposing "climate change" is a loser.

Whit Ayres, a Republican political consultant, said Mr. Trump was not helping himself by continuing to reject climate science. "It's gotten to the point," he said, "where denying the fundamental reality of climate change is no longer a credible position."

National Review’s Jim Geraghty unearthed some actual journalism that suggested the wildfires in California are not all about global warming after all.

You probably have heard much less about how much government policy and deliberate decisions can exacerbate the damage of wildfires. In late August, ProPublica did an important, detailed, and thorough work of journalism looking at how the fires in California are seriously exacerbated by national, state, and local policies that minimize the use of controlled burns that would limit the scope of naturally occurring fires.