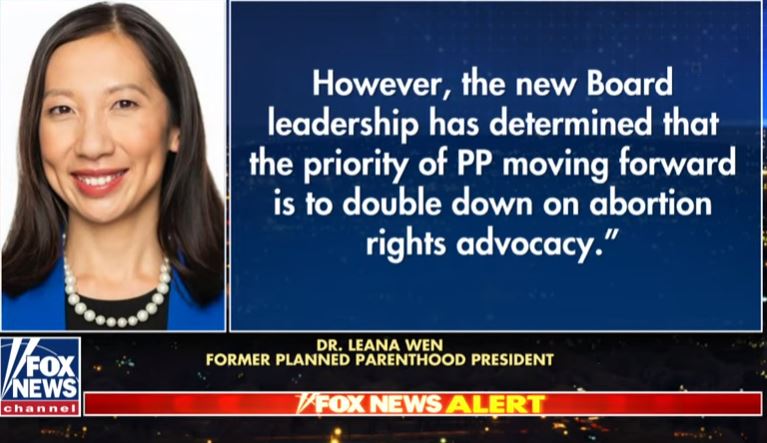 The front of Thursday’s New York Times featured a follow-up on the unceremonious ouster of Planned Parenthood president Leana Wen, after just eight months on the job leading the country’ largest abortionist, in a fight over the group’s direction during a time of pro-abortion laws under pressure. Reporter Sarah Kliff (who previously covered the Planned Parenthood sting for Vox) and Shane Goldmacher pondered “Health Provider or an Advocate? Planned Parenthood’s Quandary.”

But an “advocate” for what? The headline lacked the word “abortion,” which is certainly the organization’s raison d’etre, though Planned Parenthood is loath to admit abortion as its true mission. The mainstream media, including the Times, have spent years laughably insisting Planned Parenthood is more than an abortion megaplex, and now the organization with one move has contradicted all that cozy public relations by firing their president for insufficient focus on abortion.

Current and former Planned Parenthood officials describe Dr. Wen as a smart but alienating manager who wanted to significantly reorient the group’s focus away from the abortion wars and more toward its role as a women’s health provider.

Early in her tenure, for instance, Dr. Wen directed her staff to add new pages to the Planned Parenthood website about topics like asthma and the common cold -- conditions that its clinics do not typically treat. One of her first major campaigns was simply called “This is health care.”

But as states began to pass ever more restrictive laws on abortion, and with the addition of a conservative justice to the Supreme Court -- endangering Roe v. Wade -- Planned Parenthood’s leaders felt they needed a more politically invested advocate in the battle over abortion access, according to people familiar with the matter.

The internal turmoil underscores one of the group’s central tensions: Is it a political organization or a health organization first? And can it be both at a time when abortion has been elevated to a prominent and incendiary issue in the 2020 presidential election -- and where a middle ground has all but disappeared?

Many strategists who work with abortion rights activists believe Planned Parenthood was caught off guard and ill prepared to deal with the recent attacks from President Trump and Republicans, who spread misinformation about Democratic-led efforts in states like New York to expand abortion access later in pregnancy. Instead of aggressively refuting the claims that Democrats were legalizing “infanticide,” Planned Parenthood and other abortion rights groups were slow to form a cohesive and effective response.

According to people who worked with her, Dr. Wen pushed for changes that some employees felt were not in sync with the sensibilities of a progressive organization like Planned Parenthood. One current employee said people chafed at having years of work on “the future of abortion access” suddenly replaced with different priorities.

The paper actually broke the story Wednesday, with Goldmacher talking around the A-word and again suggesting conservatives were spreading disinformation about the radical nature of some state abortion laws.

Dr. Wen’s brief tenure – she took over last November – coincided with a particularly fraught moment for abortion-rights advocates. In recent months, Republican-controlled statehouses in Ohio, Alabama, Indiana, Louisiana and Missouri have moved decisively to restrict abortion access as they take aim at the protections enshrined in Roe v. Wade.

That has put abortion rights groups, including Planned Parenthood, on the defensive as they battle conservative messaging, much of it ominous and some of it false, such as claims about infanticide.

With health centers nationwide, Planned Parenthood receives close to $60 million each year through the federal family planning program, and the new edict is widely seen as being aimed at the organization. The Trump administration won a key victory last week as the United States Court of Appeals for the Ninth Circuit declined to block it from enforcing the rule.

Goldmacher provided some public relations for Planned Parenthood by hiding the fact that the organization serves as America’s abortion megaplex.

“This is a crisis time in terms of the impact on the patients we serve and the communities we serve,” she said, adding: “I think that Dr. Wen is obviously a very thoughtful leader in health care. I think what is critical for Planned Parenthood is how much we all have to really lean hard on all of the elements of our mission.” (Those elements are health care, education and advocacy.)

What about “abortion” or at least “reproductive rights,” as the mission statement has it

Planned Parenthood, a more than 100-year-old organization with 600 affiliated health centers nationwide, has simultaneously served as both a health care provider for millions -- it provides cancer screenings, contraception, disease testing and abortion services -- as well as one of the leading advocacy organizations for women’s reproductive rights.