The Brett Kavanaugh hearings has really lit a feminist fire at New York magazine, whose “Women in Power” series of interviews with prominent women (liberal activists, liberal politicians, and liberal journalist Andrea Mitchell) was published in an online series and compiled in the October 15-29 print issue.

Unsurprisingly Anita Hill held the lead slot of the massive feature. The headline trumpeted “Anita Hill Won, Even Though She Lost.”

Linda Sarsour, the controversial executive director of the Arab American Association of New York, was not featured in the print magazine interviews but still made the front section with a quote. Sarsour is a media-celebrated Muslim “feminist” who has made vulgar, sexist, and intolerant remarks about ex-Muslim Ayaan Hirsi Ali, offered up misleading descriptions of Sharia law, and has made public appearances with convicted terrorists.

None of that background made it into the fawning online report on Sarsour’s stealthy (and psychologically strong-arm) hearing disruption tactics.

The headline to a collection of interviews with the Democratic women on the Senate Judiciary Committee also had no room to criticize their underhanded behavior and assumptions of guilt during the hearings. Instead, Kavanaugh was to blame for any unpleasantness: “Dianne Feinstein, Amy Klobuchar, Kamala Harris, And Mazie Hirono Asked the Questions – Brett Kavanaugh Got Hysterical.”

For comic relief, there was “Stormy Daniels Didn’t Want to Be Anybody’s Hero.” (She’s getting her wish.) 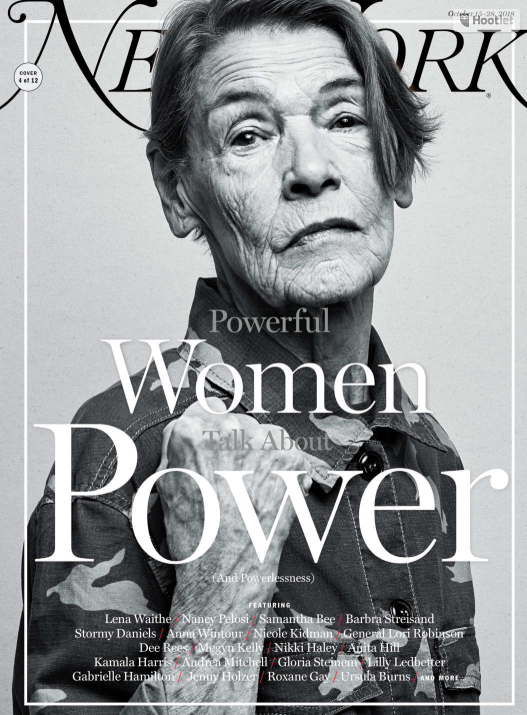 Rebecca Traister’s “Samantha Bee Is Really Angry” (so what else is new?) added vulgarity to the mix. Interviewee Traister didn’t seem in a healthy mental spot either, chipping in with “I yell at everyone, and I wake up every morning with my hands in clawlike fists.”

New York talked to a few conservatives, including pro-life activist Marjorie Dannenfelser and Ambassador to the United Nations Nikki Haley. But the overall thrust was strongly leftward. In addition to the four anti-Kavanaugh senators, House Minority Leader Nancy Pelosi got a profile, and Lisa Miller interviewed Andrea Mitchell, chief foreign-affairs correspondent for NBC news, who provided this gem from her coverage of the Thomas-Hill hearings of 1991:

When I look back at my coverage of Anita Hill and Clarence Thomas on that pivotal Friday night of the first day of the hearings, I remember Tom Brokaw was anchoring, and he asked me, “What have we learned?” It was close to midnight. I said something I can’t believe I said on television. I said, “I think we learned that the United States Senate is the last great plantation in American government.” So I didn’t trim my sails at all on that, and no one asked me to.

(Mitchell is quite proud of that quote; she repeated the same line in a 2012 interview with More magazine.)

But I think story selection was dictated a lot by the male dominance of the editorial staff. I don’t think we did enough on women’s empowerment and medical issues and other social questions that were considered soft. The fact is that we have to redefine what is news....

Then Mitchell offered up some sympathy for 1992-era Hillary Clinton against the supposedly hostile press.

It’s the same with the way we define what’s important in a political campaign. The coverage of Hillary Clinton comes to mind. A lot of that was self-inflicted, but as a woman, when I think why she had the private server -- which was definitely wrong -- why she was so defensive, so secretive, I remember I saw her in 1992 right after the Gennifer Flowers story broke and the draft-dodger accusations. She came to New Hampshire, her first time on the national stage to campaign for Bill, and all the cameras were chasing her down the street. She was cowering like a trapped animal. I’m not excusing the private server, I’m just trying to understand and explain.