The bias highlight of Night One of the Democratic National Convention in Philadelphia from the New York Times was the laudatory coverage of “pop-culture heroine” Michelle Obama’s prime-time anti-Trump speech. The most prominent was Michael Shear and Mark Landler's “Stirring Speech by a First Lady Backs Another” in Tuesday’s paper. Nick Confessore found it "a moving political speech.” Meanwhile, Matt Flegenheimer looked back affectionately at how left-wing Hillary rival Sen. Bernie Sanders (aka "Birdie Sanders") became cool. 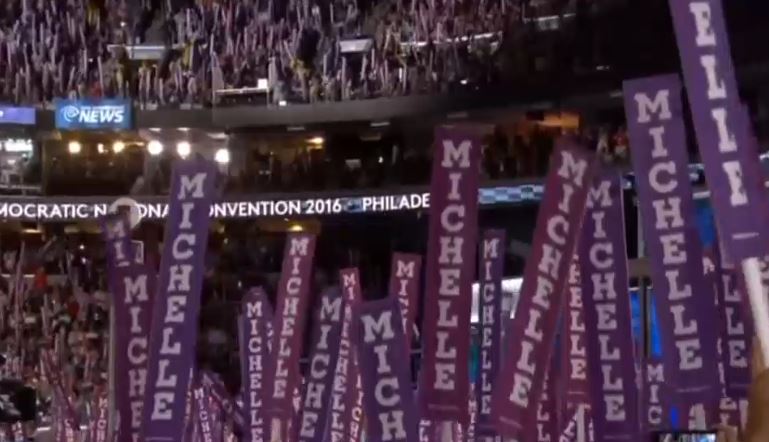 Delivering one of the most stirring speeches Monday night at the Democratic National Convention before a sea of delegates waving purple signs that read “Michelle,” she urged the party to do for Mrs. Clinton what they did for her husband.

In her speech, Mrs. Obama roused the convention hall into a frenzy by denouncing Donald J. Trump without ever using his name. She mocked his frequent use of Twitter, called him thin-skinned and questioned whether he has any real knowledge of policy.

And she forcefully urged the audience and the television viewers to reject Mr. Trump’s campaign motto, casting it as a cynical description of a country in crisis that she does not recognize.

Speaking of "a country....that she does not recognize": The Times said nothing about another famous speech by Michelle Obama -- her February 2008 speech in Milwaukee where she said “People in this country are ready for change and hungry for a different kind of politics and … for the first time in my adult life I am proud of my country because it feels like hope is finally making a comeback.” The Times has stubbornly defended her remarks.

That careful, traditional approach helped turn Mrs. Obama into the most popular person in the Obama White House, a kind of pop-culture heroine with little of the polarizing image or political baggage that hounded Mrs. Clinton.

Times White House correspondent Peter Baker gushed on Twitter: "‏Michelle Obama has always been a far more powerful speaker than is commonly recognized, and tonight she is a unifier for Democrats."

Reporter Nick Confessore also found himself impressed with Michelle Obama during live coverage of the speech Monday night: “It is amazing to think that Obama is a political spouse who entered the arena reluctantly over the last eight years. No one tonight has given a more effective and moving political speech.”

Earlier in the evening, Confessore took time to snark about the speakers' roster speaking at the RNC in Cleveland, as opposed to the professional politicians in Philadelphia: “I also don’t see Chelsea Clinton’s personal assistant on the speaker list....When does the general manager of Clinton’s vineyard speak?...Folks, this is a weird convention. Most of the speakers are elected officials.”

Reporter Patrick Healy spotlighted the main problem with the Democratic Convention: Just too many great speakers and compelling personalities to spotlight: “A Roster Full of A-Listers, and Too Little Time to Showcase Them All.”

At a normal convention, organizers would happily give a coveted speaking role to a popular vice president like Joseph R. Biden Jr.

But this year the Democrats find themselves with too many party leaders (Hillary Clinton, Senator Tim Kaine, President Obama, Bill Clinton, Mr. Biden) and political stars (including Senator Bernie Sanders, Senator Elizabeth Warren and Michelle Obama) and not enough prime slots in the 10-to-11 p.m. window over the convention’s four nights, when the networks join cable channels in live coverage.

This cup-runneth-over challenge stands in sharp contrast to the glass-half-empty problem last week at the Republican convention, which had relatively few A-list speakers because so many prominent party leaders objected to Donald J. Trump. Republicans scrambled to put together a roster and revealed it at the last minute, while Democratic officials announced theirs early, among them naming Mr. Obama and Mr. Biden as headliners for Wednesday night.

Taking another angle, Matt Flegenheimer looked back affectionately at how left-wing Hillary rival Sen. Bernie Sanders (aka "Birdie Sanders") became cool with the kids: “How Bernie Sanders Left His Mark on Pop Culture.”

Making Hillary Clinton sweat through the end of the Democratic primary season was unlikely enough. But how did a septuagenarian socialist senator become something of a cultural (and pop cultural) phenomenon?

Here are some of the ways in which that senator, Bernie Sanders, who is scheduled to speak on Monday at the Democratic National Convention, has left his mark beyond politics.

It is easy to see why many of America’s youngest residents gravitated to Mr. Sanders -- or, at least, why their parents have seen fit to dress them up as supporters, thick-frame glasses and all.

The revolution was served cold.

Mr. Sanders inspired an ice cream flavor created by Ben Cohen, a co-founder of Ben & Jerry’s -- which began as a scoop shop in the senator’s home state, Vermont.

After some gentle mockery of Mr. Man-of-thePeople attending the pricey show "Hamilton” on Broadway and for having prime seats at a Golden State Warriors playoff game (“Neither spectacle proved a perfect fit for the Sanders message”) Flegenheimer ended on a highlight.

Skeptics wondered how a President Sanders might have hoped to muscle his ambitious agenda through Congress. But there was always one rather impressive testament to his persuasive powers: He seemed capable of controlling animals.

It happened in March, at a rally in Portland, Ore. Mr. Sanders had been talking about education. A small bird -- later named “Birdie Sanders” by collective internet wisdom -- drew near. The crowd stirred.

“Now, you see, this little bird doesn’t know it …” Mr. Sanders began. He started to lift a finger skyward.

Then came the scene that launched a thousand memes: Birdie Sanders, landing on the lectern, as the people roared.