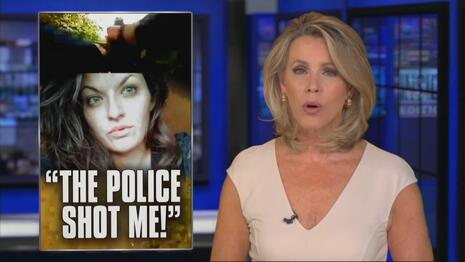 One of the more egregious examples of journalistic malpractice by the liberal media is the reflexive portrayal of questionable police violence as a racial issue by giving disproportionate coverage to African American victims while ignoring nearly all victims who are of other races -- even though about 75 percent of police shooting victims are not black.

A classic example illustrating this point is demonstrated by the large amount of time devoted to the botched police raid that resulted in the tragic death of Breonna Taylor, a black woman in Louisville, Kentucky, versus a similarly questionable raid last year that resulted in the deaths of a white couple -- Rhogena Nicholas and Dennis Tuttle -- in Houston during a no-knock raid. The lead narcotics officer in the case, Gerald Goines, was charged seven months later amid accusations that he allegedly lied to get the no-knock warrant against the couple.

It is amazing that, even in cases when a white victim being shot is caught on bodycam video, the media are still likely to ignore it.

Just a couple of weeks ago, an Arlington, Texas, police officer was indicted for accidentally killing an unarmed white woman, Margarita Brooks, while she was simply lying under a tree resting, after her dog started chasing him. The shooting had actually happened more than a year earlier, but the indictment only happened just recently. None of the networks has so far covered the story, although the syndicated Inside Edition ran a full report Tuesday last week.

And, also just last week, bodycam video was released showing an unarmed white autistic teen, Linden Cameron, being shot by police in Salt Lake City, which happened a few weeks ago and received very little media attention. Tuesday last week, after the video was released, CBS This Morning gave the story over four minutes, and World News Tonight aired a mere 31-second brief as other national news shows ignored it.

By contrast, since May, up until Tuesday, September 22 -- the day before the grand jury decision not to indict the officers who killed Taylor - ABC's World News Tonight had already given the Louisville story more than 12 minutes of time, covering it on 10 separate episodes. The CBS Evening News gave it more than 13 minutes, across nine episodes; and the NBC Nightly News devoted more than 17 minutes across 13 episodes.

CNN's three-hour morning news show, New Day, gave the Taylor case more than 51 minutes over the same time period. By contrast, according to a Nexis search, there is no sign that CNN ever covered the botched no-knock raid in Houston that occurred in January 2019 which notably shined light on the controversial practice more than a year before the events in Louisville.

ABC, CBS and NBC did little better than CNN with regard to the Houston case as they only gave it scant attention.

CNN's New Day show has notably only highlighted one example of an unarmed white police shooting victim over the past two years.

Such lopsided coverage creates the false impression that it is commonplace for cops to act rashly against black Americans, and nothing wrong ever happens with white Americans.

DEBORAH NORVILLE: A Texas cop is facing criminal charges after responding to a call about an unconscious woman. Officials say, as he approached the scene, an off-leash dog approached him -- he fired at the dog. The prosecutors say he barely hit the dog, and killed the woman. Ann Mercogliano has more, and we should warn you, this video may be intense for some viewers.

ANN MERCOGLIANO: It's the horrifying moment a rookie cop shoots at a dog and kills a woman.

RAVI SINGH, FORMER ARLINGTON, TEXAS, POLICE OFFICER: Are you okay? Is that your dog? Can you get it -- get back!

MARGARITA BROOKS, SHOOTING VICTIM: What the f***! Oh, my God, the police shot me!

MERCOGLIANO: Those were Maggie Brooks's final words. The mom of three died from a chest wound. Her dog, Marilyn, was only grazed. The tragedy unfolded in Arlington, Texas, when the cop, on street patrol for just a month, responded to a 911 call about an unconscious woman. In fact, Maggie was lying on a blanket in the shade with her dog. That's when Marilyn came charging.

TROY BROOKS, FATHER OF SHOOTING VICTIM: He went directly to deadly force because he was scared, untrained, and he panicked. He fired three times, and my daughter was in the direct line of fire.

MERCOGLIANO: Maggie's father, Troy Brooks, is a fire department captain. He was actually on his way to the scene when he was told the shooting victim was his daughter.

TROY BROOKS: The entire Postal Service carries pepper spray. Every runner, bicyclist, jogger, kid walking home from school -- we've all encountered a dog charging at us, and nobody else winds up dead.

MERCOGLIANO: He says Marilyn was just a puppy -- a part Labrador mix who is not vicious in any way. Maggie's mother and sister, Sarah, are also speaking out today.

SARAH BROOKS, SISTER OF SHOOTING VICTIM: To me, her dog was clearly doing everything she was supposed to do, which was protect her.

MERCOGLIANO: The rookie cop -- 25-year-old Ravi Singh -- has resigned from the force. Now, he's been indicted for criminally negligent homicide, although Maggie's family wanted him to face a more serious charge of manslaughter.

TROY BROOKS: It breaks your heart when they keep asking for their mom, and you don't know what to tell them. But it's even worse when they quit asking, and they realize that she's not coming back.

NORVILLE: Wow, how sad. If convicted, the police officer faces up to two years in prison.