The far-left Giridharadas tied budget cuts to race as he declared:

ANAND GIRIDHARADAS, MSNBC CONTRIBUTOR: But I think we have to take a historical view where for 40 years the project of the Republican party pre-Trump, right, before he was even a Republican -- has been to defund, defang, and delegitimize the state in any way possible, and to leave people to their own defenses -- and the darker your skin was, the more defenseless you should be left.

Host Reid soon turned to ex-Republican Bardella and alluded to discredited claims that Presidents Ronald Reagan and Richard Nixon exploited racism. After complaining that her mother lost her government job because of Reagan-era budget cuts, she posed:

The whole welfare queen idea -- that's Reagan, right -- a lot of these ideas that Trump is putting forward are just extreme versions of what Republicans have been doing, you know, dividing the country along racial lines, Well, that's Nixon as well, right? It's Reagan as well in his opening in Philadelphia, Mississippi, so isn't it true that all Trump is really doing is exposing something that already existed in the Republican party?

Reid's digging up the "welfare queen" stuff from the 1976 campaign -- and ignoring that this was a real-life swindler, Linda Taylor. 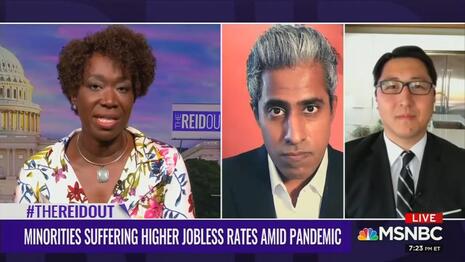 Bardella was so eager to go along with Reid's incendiary premise against Reagan makes one wonder why the MSNBC contributor was ever a Republican:

KURT BARDELLA, MSNBC CONTRIBUTOR: Absolutely, Joy. I mean, let's be very clear and honest here. Republicans for a long time -- well before Donald Trump -- were asking working Americans and minorities to do more with less. It wasn't Donald Trump who came up with ideas to defund things like school lunch programs and food stamp programs. It was the Republicans -- they've been doing that for decades.

I remember when I worked in Congress in the better part of the 2000s under both W. and Obama, it was the Republicans who, time after time, "We need to cut more from the budget" under the guise of being fiscally responsible and fiscal restraint -- "We need to take more money from people" under the ridiculous guise that everyone can pull themselves up by their bootstraps, that you don't need to live off of the government -- there are somehow givers and takers in this equation.

This episode of The ReidOut was sponsored by Aetna and Ozempic. Their contact information is linked.