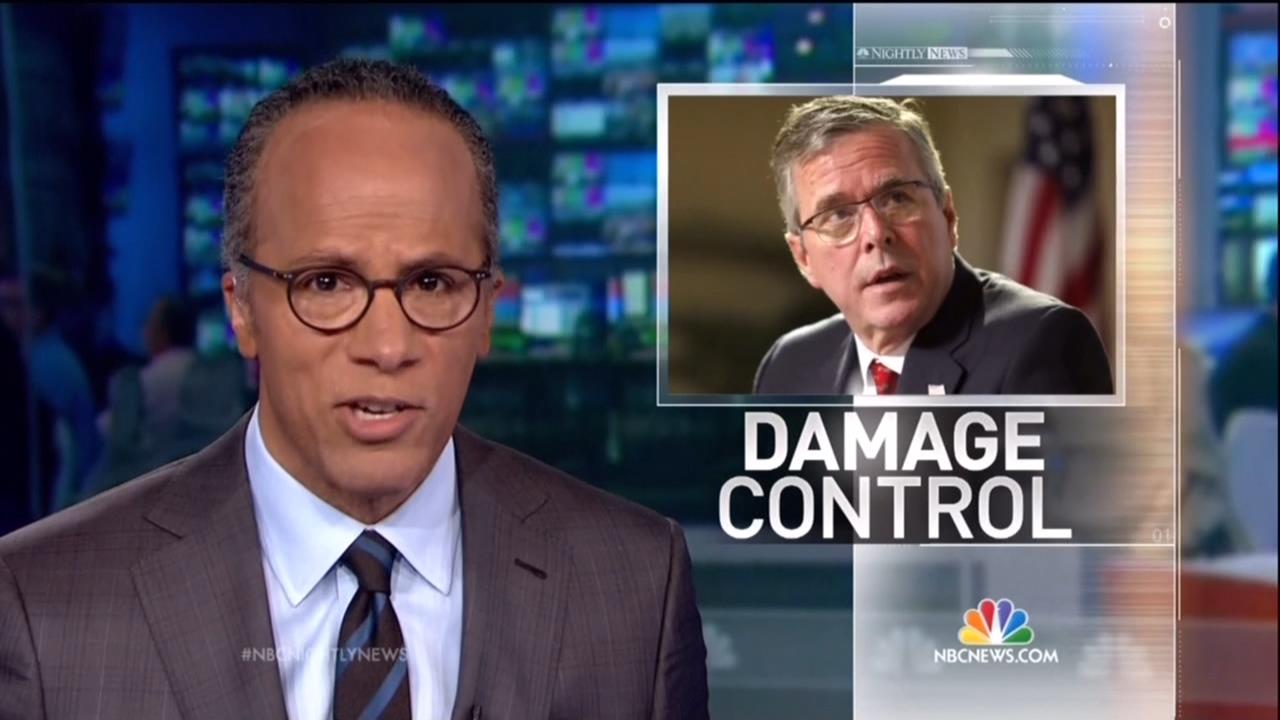 Friday's NBC Nightly News picked up where Today left off earlier in the day by hyping former Florida Governor Jeb Bush's "long week," after his Monday remark that he would have authorized an invasion of Iraq if he had been president in 2003. Lester Holt echoed Savannah Guthrie in underling that Bush has "struggled since then to put daylight between him and his brother's legacy on Iraq." He also asserted that Karl Rove's refusal to endorse him during his interview on Today was "another potential blow...to Bush's White House ambitions." [video below]

Chris Jansing touted the Rove interview by following in the footsteps of Guthrie's "rocky week" labeling from Today: "What had already been a pretty bad week for Jeb Bush today seemed to get even worse." She later played up how the Republican strategist was "pointedly noncommital about Jeb....an apparent snub."

During her report, Jansing played two clips from Rove apparently being "pointedly noncommital" about the Republican presidential candidate. She continued with her "apparent snub" term, and added that "analysts say Bush may not want the endorsement." Her featured "analyst" was Washington Post reporter Karen Tumulty, who contended that "it would take us right back to the whole – is this just the big, latest chapter in the Bush family?"

The journalist spent the last part of the segment zeroing in on how "it also doesn't help that Bush spent much of this week trying to explain this answer on Iraq." She concluded that "the good news for Jeb Bush: the Iowa caucuses are more than eight months away."

After the Jansing report, Holt turned to Meet the Press host Chuck Todd, who repeated many of his colleagues' labeling regarding Jeb Bush:

HOLT: Chuck, sounds like a lot of maneuvering room. Eight months is a lot of time. 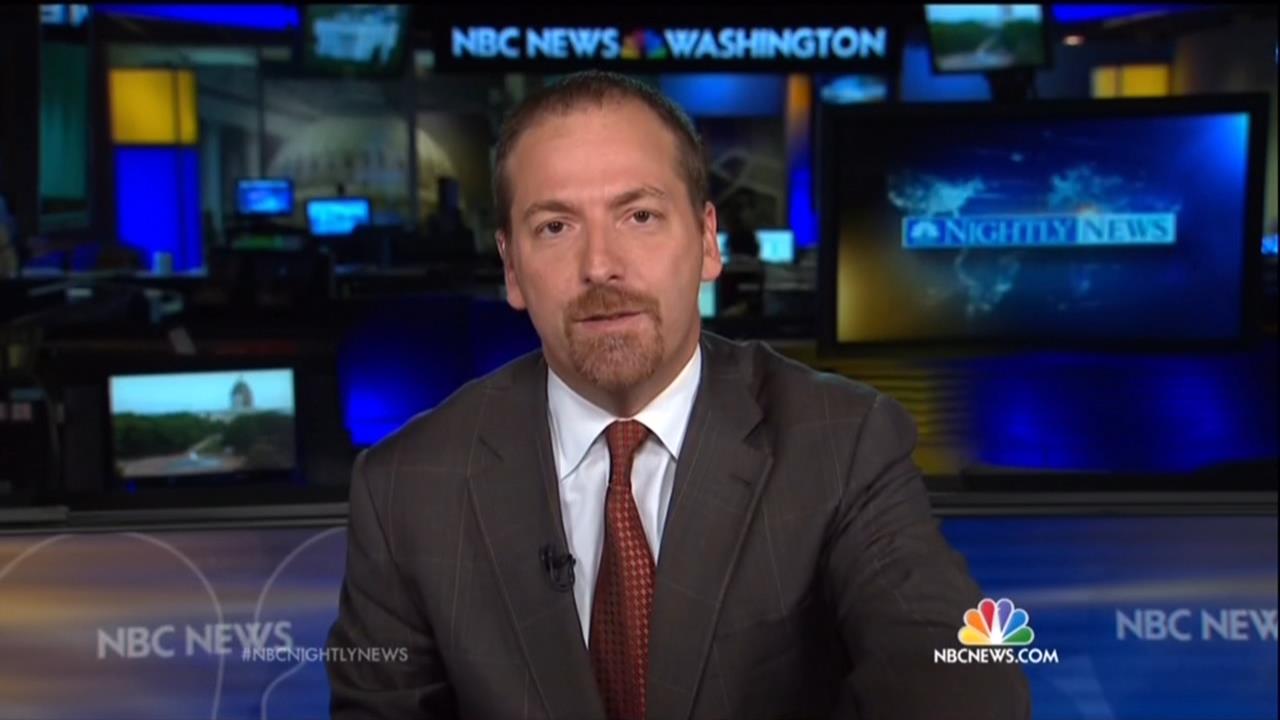 CHUCK TODD: It sure is. And I think the biggest news of the week is what we learned – that Chris Jansing just talked about – which is, not only is Jeb Bush not the front-runner for the Republican nomination, but there is no front-runner for the Republican nomination. I think Jeb had a bad week; and frankly, it could be something that lingers for him. Maybe he doesn't know how to get out of his brother's shadow. That could be what we learn this week.

But we realize, it is a crowded field at the top. Scott Walker is the man in Iowa. Rand Paul's the guy who polls against Hillary – best against Hillary Clinton. Jeb Bush is the man with money, but with little else. And Marco Rubio is the buzz candidate. So that's the good news is – if you're a political junkie – is this thing is going to be fun to watch. But it is a little bit nervous for some Republicans, who don't like the idea that it's this wide open – because when it's wide open, it leads to some – a lot of internal fighting.

Like Good Morning America, Friday's ABC World News Tonight didn't cover Jeb Bush. CBS Evening News also skipped the 2016 presidential race on its Friday broadcast. By contrast, Charlie Rose spotlighted Bush's "week of scrutiny" and his "fifth attempt this week to explain his position" on the Iraq War earlier in the day on CBS This Morning.

LESTER HOLT: Tonight marks the end of a long week for Jeb Bush, who stumbled on Monday over a question about the Iraq War – and has struggled since then to put daylight between him and his brother's legacy on Iraq, without appearing to turn his back on the former president.

CHRIS JANSING (voice-over): What had already been a pretty bad week for Jeb Bush today seemed to get even worse.

KARL ROVE, GOP STRATEGIST (from interview on NBC's Today): No, I'm not planning to – to endorse anybody.

JANSING: Was pointedly noncommital about Jeb.

JANSING: An apparent snub – but analysts say Bush may not want the endorsement.

KAREN TUMULTY, THE WASHINGTON POST: It would take us right back to the whole – is this just the big, latest chapter in the Bush family?

JANSING: Still, it adds to the growing perception that while Jeb Bush is the man with the name and the money, the Republican race remains wide open – no clear front-runner.

Tomorrow, in Iowa, Bush will be one of eleven Republicans speaking at the legendary Lincoln Dinner. 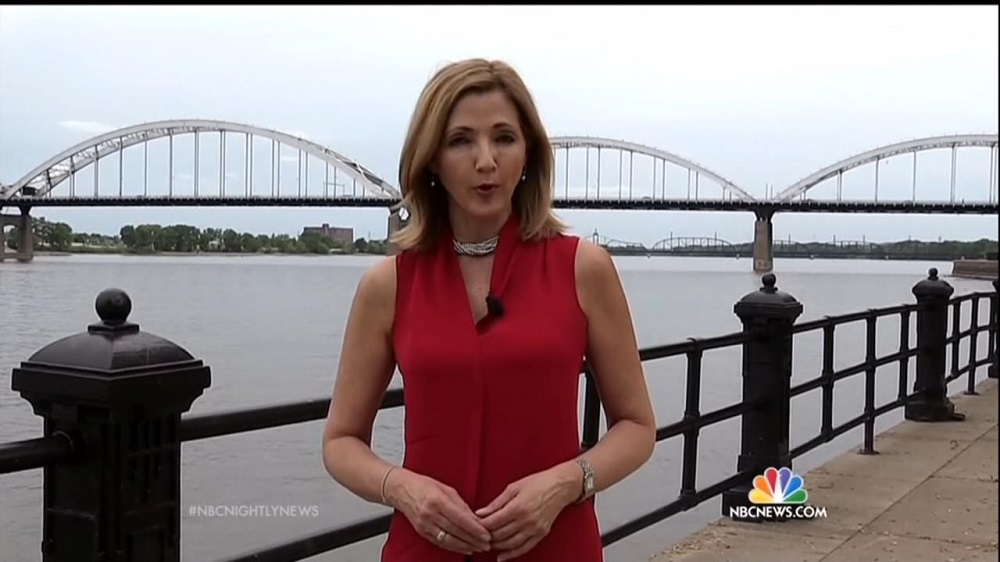 JANSING (on-camera): And here in Iowa – well, not exactly friendly territory for Jeb Bush. He's more moderate than the typical Republican voter here. Plus, they're not happy he's decided to skip this summer's straw poll.

JANSING (voice-over): It also doesn't help that Bush spent much of this week trying to explain this answer on Iraq.

MEGYN KELLY (from Fox News Channel's The Kelly File): Knowing what we know now, would you have authorized the invasion?

JEB BUSH: I would have.

JANSING: It would take three more answers over four days to finally get this.

BUSH: Would not have gone into Iraq.