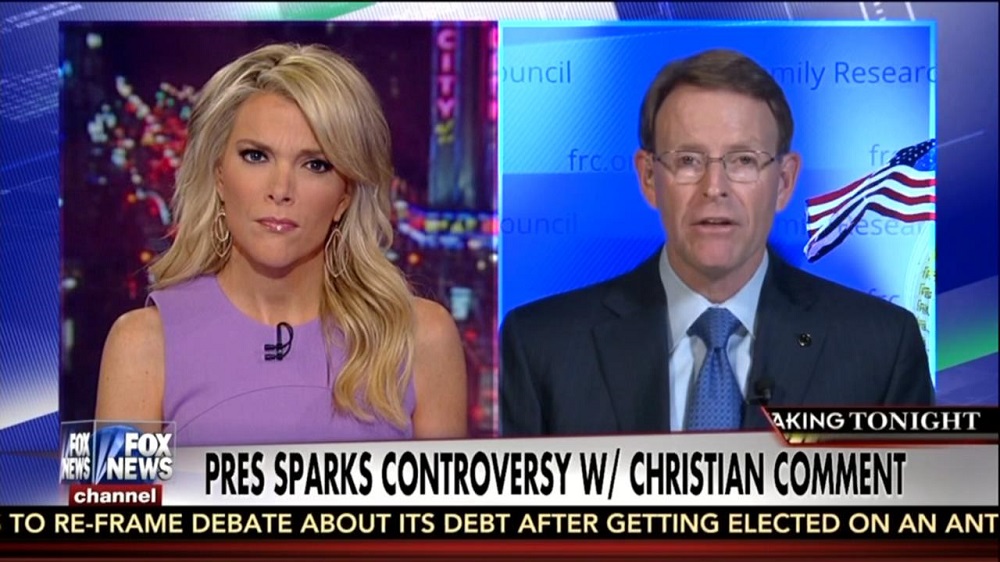 As the Big Three networks were touting President Obama's claim that climate change affects the health of children – including that of his own daughter – on Wednesday, their morning and evening newscasts have yet to report on the chief executive's criticism of many Christians during a Tuesday prayer breakfast at the White House. Mr. Obama underlined that "on Easter, I do reflect on the fact that as a Christian, I am supposed to love. And I have to say that sometimes, when I listen to less-than-loving expressions by Christians, I get concerned."

On Tuesday's The Kelly File on Fox News Channel, host Megyn Kelly pointed out that this isn't the first time in recent months that President Obama has taken a jab at Christians: "So this is an Easter prayer breakfast at which he...goes off script to criticize Christians. And then...at the National Prayer Breakfast...he decided there to lecture Christians about not being 'on their high horse' when it comes to judging radical Islamic terrorists." [video below]

After playing the clip of the President's remark, the anchor spotlighted its possible connection to the recent controversy over proposed state-level Religious Freedom Restoration Acts, and continued by pointing out two recent massacres of Christians by Islamist terrorists:

MEGYN KELLY: One might assume the President was making a reference there to the fight over Indiana's religious freedom law, but the White House later refused to comment on the President's meaning. Nevertheless, his remarks come as Christians are increasingly being targeted by terrorists worldwide.

Remember, it was just last week that more than 140 people died at the hands of Islamic terrorists at a university in Kenya. Witnesses say the killers specifically singled out Christians for execution. In February, the world was horrified as 21 Egyptian Christians were marched to their deaths in Libya – forced to kneel down before they had their throats slit. Yet, the White House chose to identify these victims at the time as Egyptian 'citizens.' All this comes as the Pope becomes increasingly vocal about the plight of Christians being targeted for their faith – repeatedly warning the world this Easter weekend not to turn a blind eye to the atrocities being committed.

Kelly then brought on the president of the conservative Family Research Council, Tony Perkins, for his take on Mr. Obama's criticism of Christians. Perkins returned fire at the liberal politician, and played up how the President failed to use the opportunity to decry the recent persecutions of Christians around the world. The Fox News host pressed her guest about his attack on the Democrat:

KELLY: Tony Perkins is president of the Family Research Council. Tony, good to see you tonight. And so, it doesn't seem that there's much doubt what the President was referring to. As pundits from both sides of the aisle have suggested, he was referring to the Indiana religious freedom law, and – and seemed to be passing a rather harsh judgment on it.

TONY PERKINS, FAMILY RESEARCH COUNCIL PRESIDENT: Well, Megyn, you're right. I think – I think that's true. What saddens me most is not the President's consistent swipes at orthodox Christianity. It's another missed opportunity, in which – this was the prayer breakfast, as you pointed out, for Easter – in which the President, once again, failed to bring attention to the persecution of Christians from around the world – persecuted for nothing more than the fact that they embrace Jesus Christ and they follow him. We're talking about moms and dads, brothers and sisters. As you pointed out, on Friday, 150 students in Kenya killed – separated the Muslims; Christians separated. The Christians were killed. The White House didn't acknowledge that.

And that's the problem here, is that we see – this is not happening, Megyn, in a vacuum. And I think there's a reason the President doesn't want to talk about this persecution of Christians, because, in part, his policies are responsible. The growing hostility toward Christianity here at home is fostering an environment where tyrants and terrorists feel free to kill people – to kill Christians because of their faith.

KELLY: I mean, that – don't you think that's taking it a bit too far? I mean, President Obama – he's not exactly out there defending – you know, the Christians in Indiana and elsewhere who have sincerely-held religious beliefs, and that's a difficult issue. But to say that his policies are leading to the murders of Christians-

PERKINS: I am saying that his policies are fostering an environment in which tyrants and terrorists feel that America no longer places a high priority on religious freedom and the protection of the oppressed. And in that shadow that he has cast with these policies, we see more and more Christians being persecuted – their lives taken from them – in faraway places. You cannot escape the fact that what America does has consequences elsewhere.

KELLY: He – of course, he went in when the Yazidis – the Christians in Iraq – were being attacked by ISIS. And so, the President has not sat by idly in all instances.

Later in the segment, Kelly zeroed in on the President's controversial comment from his February speech at the National Prayer Breakfast, where the second-term executive invoked the Crusades and the Inquisition:

KELLY: You know, this is not the first time. So this is the Easter prayer breakfast, okay? The holiest holiday in Christianity, Easter-

KELLY: So this is an Easter prayer breakfast at which he takes – you know, goes off script to criticize Christians. And then, this happened not long ago at the National Prayer Breakfast, where he decided there to lecture Christians about not – not being 'on their high horse' when it comes to judging radical Islamic terrorists. Remember this?

OBAMA (from February 5, 2015 address at the National Prayer Breakfast): Lest we get on our high horse and think this is unique to some other place – remember that during the Crusades and the Inquisition, people committed terrible deeds in the name of Christ.

KELLY: I mean, the question is whether those – those comments do real damage – not just to morale among Christians about what their own president thinks of them – but – but to the enemy. You know, not-

KELLY: Not paving the way for an argument that he's causing deaths, but that they feel he won't stand up for Christians who are under threat.

PERKINS: Look, in a nation where almost 80 percent of people – America – identify as Christian, to have a president that is continually dismissive of Christianity, there is no question that that sends a message to bad people in bad place – in places far away that will do bad things as a result.

Look, America has long been seen as the beacon of light, hope, and freedom, and that has been fostered by our Christian ethic. And we have been a defender of all faiths. That's why this president can get away with saying these things, because Christianity is tolerant. Christianity allows these things. We allow other people of other faiths to live here, and we welcome them. But we want to exercise our faith, too. And I would take – and I would take instruction from the apostle, Paul, who, as a Roman citizen, he challenged his government, and he demanded his rights. And I think it's time that – and I think it's happening – that more and more Christians are going to exercise their rights, and demand their rights, as American citizens, to be free to express their faith, and live it here in this country.

KELLY: Tony Perkins, thank you for being here.