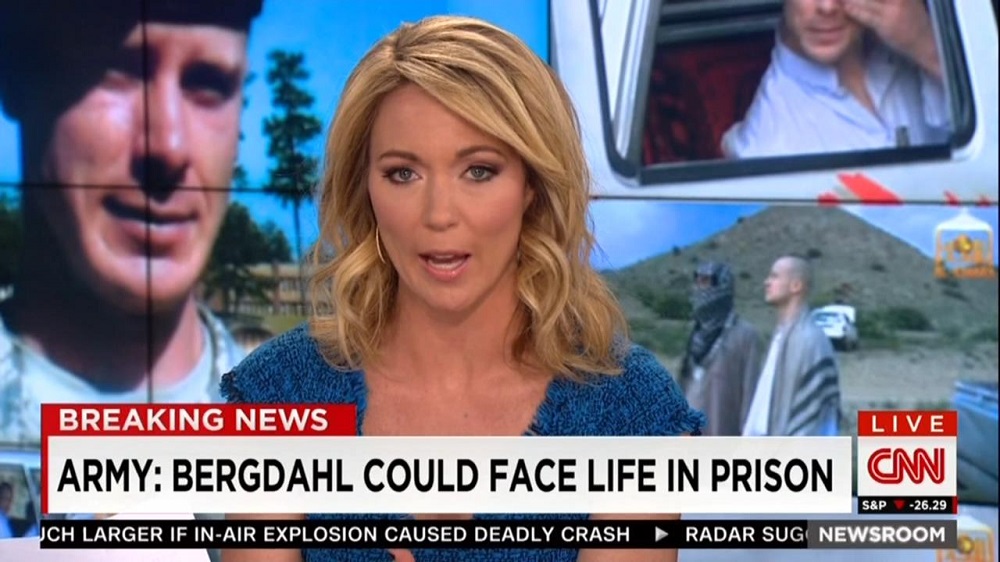 CNN's Brooke Baldwin slanted towards the sympathizers of Sgt. Bowe Bergdahl on Wednesday's CNN Newsroom, just minutes after the U.S. Army announced that the former captive would be charged with desertion. Baldwin asked special forces veteran Scott Mann, "You have those who...on the opposite end, [are] vilifying him. Again, this is someone who was held...for five years by terrorists. Is that not – this is what some say – is that not punishment enough?" [video below]

Moments earlier, the anchor turned to Reuters correspondent David Rohde, who was held by the same Taliban-affiliated terrorist group that had captured Sgt. Bergdahl. Rohde set up Baldwin's question by admitting that he had a bias on this issue, due to their common experience:

BROOKE BALDWIN: David Rohde, to you – because I feel like this is – you almost have to look at this two different ways – or two different narratives. You have what's happening with Sergeant Bowe Bergdahl. But then, you also have this prisoner swap, which is absolutely part of this entire conversation. It was last May – the Obama administration agreed to take those five members of the Taliban, who'd been down at Guantanamo Bay – swap them. We've all seen the video here for Bowe Bergdahl there in this undisclosed area of Afghanistan – much criticism on the administration for this willingness to the swap. And now, with this charge of desertion here – I know the President said – you know, essentially, leave no soldier behind – but what are the implications here for the administration; for the Pentagon?

I think there's a very high chance of some kind of plea deal here. As Barbara [Starr] said, they don't want things to – you know, this embarrassing – those questions about what happened in his unit. But I also, just from a personal sense – and I'm biased. I was held by the same people, the Haqqani network, for seven months. Bowe was held, you know, by them for – for five years.

You know, he walked off that base. He deserves to be held responsible for it. But I guarantee you he regretted it every day of the five years he was in captivity. There's been an effort by some people to really vilify this young man and vilify his family. You know, he made an enormous mistake. He should be accountable for it. But, you know, I would be shocked if there isn't a plea bargain here, and I'll be disappointed if there's real effort to – to attack him personally.

The CNN then asked her "punishment enough" question to Lt. Colonel Mann. The Army veteran bluntly answered Baldwin's question, and put the situation into a broader context:

BALDWIN: To David's point, Colonel Mann – I mean, you have those who also – you know, on the opposite end, vilifying him. Again, this is someone who was held – you know, for five years by terrorists. Is that not – this is what some say – is that not punishment enough?

LT. COL. SCOTT MANN (RET.), U.S. ARMY SPECIAL FORCES: Well, you know, no – I mean, if he is found guilty of desertion, which we don't – you know, we need to let the process play out. Then – then, you know, that – that crime holds with it its own – its own penalty. And, you know, I certainly think that that will play out the way it's supposed to.

I think what – what concerns me more than anything else about this, is that it's – it's becoming such an issue right now – is that it could actually cause us to lose focus on the thousands of men and women that are over there still fighting right now; you know, that have done multiple tours over there. And, like I said earlier, with [Afghan] President Ghani here in the United States, we're at a critical juncture right now with what our follow-on policy is going to be in Afghanistan, and I think what we got to watch here is not letting – you know, it's a bad thing, desertion, if he's found to have done that. But there's much larger strategic fish to fry here in Afghanistan.