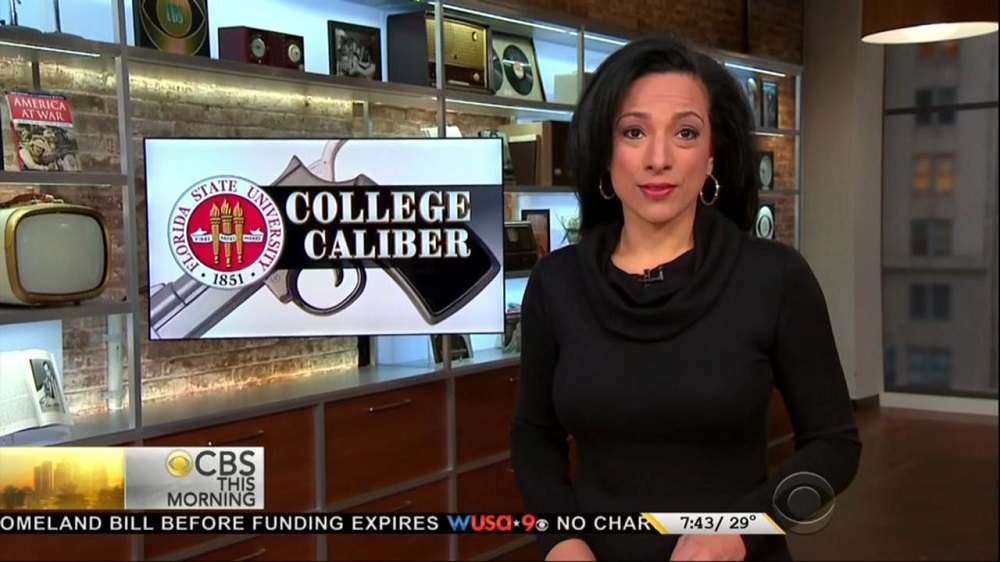 Friday's CBS This Morning surprisingly covered a proposed bill in Florida that would allow college students with concealed firearms permits to carry their weapons onto campus. Michelle Miller spotlighted a Florida State University graduate student who backs the bill. However, Miller also featured two opponents of such "campus carry" legislation during her report.

Anchor (and open Obama donor) Gayle King also made it clear that she sided with the anti-concealed carry activists. When co-anchor Norah O'Donnell remarked that "it's a really interesting debate" on the issue, King replied, "I think it's a scary debate. I think the police officer raised a good point, because normally, if you see somebody with a gun on campus, it's a bad thing. If the cops come, who's a good guy; who's a bad guy?" [video below]

O'Donnell pointed out the "new push...to let college students bring guns to school" during her introduction to Miller's report, and continued that "lawmakers in 13 states are considering so-called 'campus carry' bills. Supporters believe armed students could stop violent crimes, like sexual assaults." She also underlined how "the controversy is dividing students."

The correspondent picked up where O'Donnell left off: "This is a hot-button topic at Florida State University. Opponents believe allowing students to be armed is a very bad idea, but proponents say crime victims have a right to fend off their attackers." She led with three straight soundbites from Rebeka Hargrove, one of the leaders of Florida State University's Students For Concealed Carry:

REBEKA HARGROVE, FSU STUDENTS FOR CONCEALED CARRY CO-PRESIDENT: If I was single and – and dating in college, and my boyfriend tried something that I said no to, and started sexually assaulting me, I would use my firearm to defend myself.

MILLER (on-camera): You feel safer with a gun in your purse or on your person?

HARGROVE: Yes – much. I know that if anything were to happen, I would be able to defend myself.

MILLER (voice-over): Only seven states permit students to bring guns onto public universities. Florida is one of twenty that ban it, but a bill in the state legislature aims to change that.

UNIDENTIFIED MAN 1 (over public address system): There has been a shooting in the library!

MILLER: She also points to mass shootings, like this incident in November, when a gunman opened fire in a campus library – injuring three people.

UNIDENTIFIED WOMAN 2 (off-camera): Are you okay?

HARGROVE: There were students there that could have stopped the shooter before he hurt or – and seriously injured more students.

Miller then played her clips from the two opponents of concealed carry on campus:

DAVID PERRY, FLORIDA STATE UNIVERSITY POLICE CHIEF: That would have – have exacerbated and made our situation even worse.

PERRY: To have two or three or more people with weapons yelling commands – people firing rounds that can't be accounted for – that's just not a good mix.

ALEXANDRA BRODSKY, KNOW YOUR IX CO-FOUNDER: We're talking about why shouldn't a woman be able to carry a gun to protect herself. But if you're going to give her a gun, you also have to give rapists a gun. And I think that we can all realize that's a really bad idea.

It should be pointed out that Brodsky isn't merely the co-founder of "Know Your IX." She is also an editor at the radical feminist website, Feministing, and is a one-time fellow for Planned Parenthood. However, Miller didn't disclose these left-wing affiliations during her report.

The CBS correspondent did play one more soundbite from Hargrove near the end of her report. After King made her "scary debate" remark, Miller noted that "a lot of students agree with you. A majority of them at Florida State University are against it – 86 percent."

This isn't the first time that CBS This Morning slanted toward the liberal side of the guns on campus debate. Back in November 2012, the morning show boosted Stephen Colbert's attack on a proposed dorm for undergraduates with gun permits.