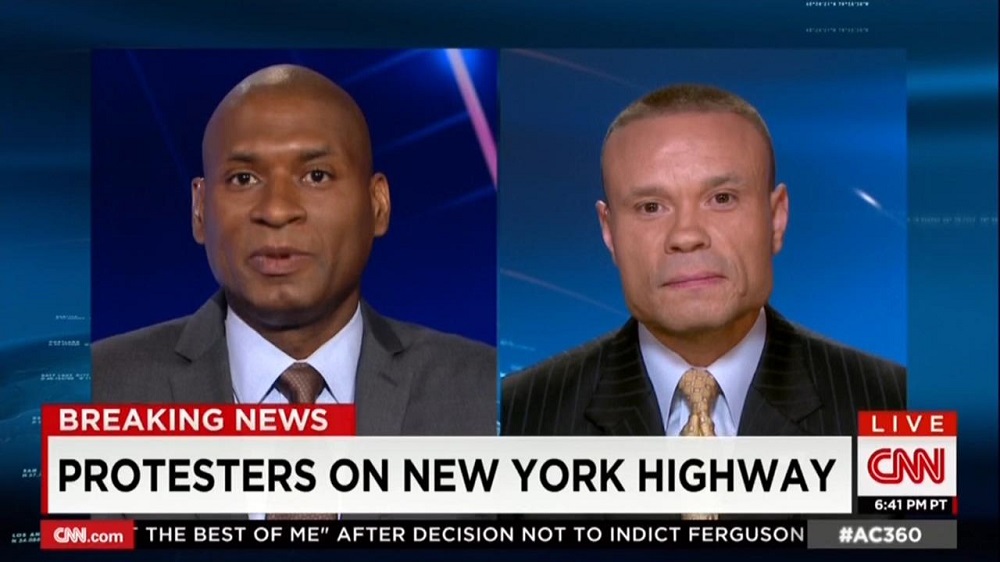 Charles Blow of the New York Times faced off with conservative Dan Bongino on CNN's Anderson Cooper 360 on Wednesday over whether an inherent racial "bias" against blacks in American society fed into the controversial case of a NYPD officer choking Eric Garner to death during an arrest. Blow claimed that "society...acculturates us to fear, and...that is how the whole justice system becomes corrupted and biased....we are not always even aware that we have the bias."

Bongino, himself a former NYPD officer, ripped the liberal writer's claims as "utterly absurd." Blow cited apparent "social science" supporting his "bias" claims, and blasted the former Secret Service agent's critique as "offensive," especially in the wake of agrand jury choosing not to indict the policeman in the Garner case: [video below]

DAN BONGINO, FORMER SECRET SERVICE AGENT: Listen, you can quote to me every scientific study you can like, but you're not going to convince me-

BLOW: There is a mountain of evidence-

BONGINO: No. I think it's ridiculous – I think it's ridiculous that you're stereotyping...basically all of America, and say that somehow that – and I'm not denying, again, for the second time – that the black experience in America is far different. I don't know what it's like to have a hoodie on in Manhattan, and not be able to get a cab – I don't. I will never understand that. But for you to stereotype the entire country, and quote a few footnotes on social science and say-

BLOW: Those aren't footnotes. Those are major studies, and – and don't try – and don't try to talk out of both sides of your mouth and say that you recognize the bias; and then, that you deny the bias. You cannot have it both ways. There is bias in America-

BONGINO: You're trying to make an overly-simplistic argument-

Host Anderson Cooper brought on Blow, Bongino, and BET editorial director Michaela Angela Davis for a panel discussion on the issue of the police-involved choking death, and the protests that erupted after the grand jury declined to indict the officer. Cooper turned to Davis first for her reaction. Davis asserted that "in terms of how it felt, I think what we're seeing, Anderson, is this – like, cycle of fear on both sides. You see the police are cultured to fear black men; and now, the community is cultured to fear the police."

When the CNN host then sought Bongino's take, the former Secret Service agent took the opportunity to confront Davis over her "fear" claim about police interactions with black men:

BONGINO: I understand, and I'm not disputing that the black experience in America has been far different. I'm white. I cannot comprehend what it was like to live under Jim Crow – to have suffered some of the indignities. I can't comprehend that. You are absolutely correct. But that's not what you said. You said that there's, somehow, a culture in police departments to fear black men. That's not accurate. That's a different argument.

DAVIS: What I said is...how this feels to us. I'm not saying that as fact. I don't know how you're trained, and how you're cultured. This is how it feels.

Blow then interjected his "bias" claims, which led to his heated exchange with Bongino. Cooper then made it clear that he sympathized with the New York Times writer's theory:

BONGINO: Right, but how does that relate to this specific case today? We can have a very sensible, reasonable argument about why we – why he was confronted over selling loosey cigarettes in the street; chokeholds and policing. But to make this big, bold statement that there's, somehow, a latent bias that may have contributed to this-

The conservative guest sparred with Blow again later in the segment:

BONGINO: ...Charles, you don't appear to be open to any argument. I mean, so it really doesn't matter-

BLOW: I'm not open to people being killed on the street-

BONGINO: Who said that? Are you just making this up as you go along? You said-

BLOW: No. Nobody's making it up. But we're not going to deny science today-

BONGINO: When did that come out of my-

BONGINO: Yeah. Am I allowed to talk here? Charles, no one is saying that more black men may have not been shot in New York. I don't have that data. What I'm saying is, if we are interested in solving the problem generated from this case – which I agree, from both perspectives, there are some very serious problems here with what happened. But you saying that there is a latent bias here, and that there may have been some racism in this case – without any evidence of it in this specific case – does nothing to solve the problem going forward.

BLOW: ...You also have to look at society as a whole. If we can acknowledge there's bias in society, we have to be able to acknowledge that that bias can creep into our justice system. That's what I have said, and I have said nothing more than that, and you will not put words in my mouth.

BONGINO: Charles – well, you've done that for me. I'm not saying – I just got done explaining to you. I am not saying there is not bias – that'd be ridiculous. There's not bias in society? Of course, there's misogyny, racism, xenophobia – of course. We're a society of men and women. We're all sinners. That's not what I'm saying. I'm saying you don't seem to have any interest in solving the problem this case generated going forward – other than making bold claims about some cultural problem in America that you can't pinpoint existed in this case. You can't.