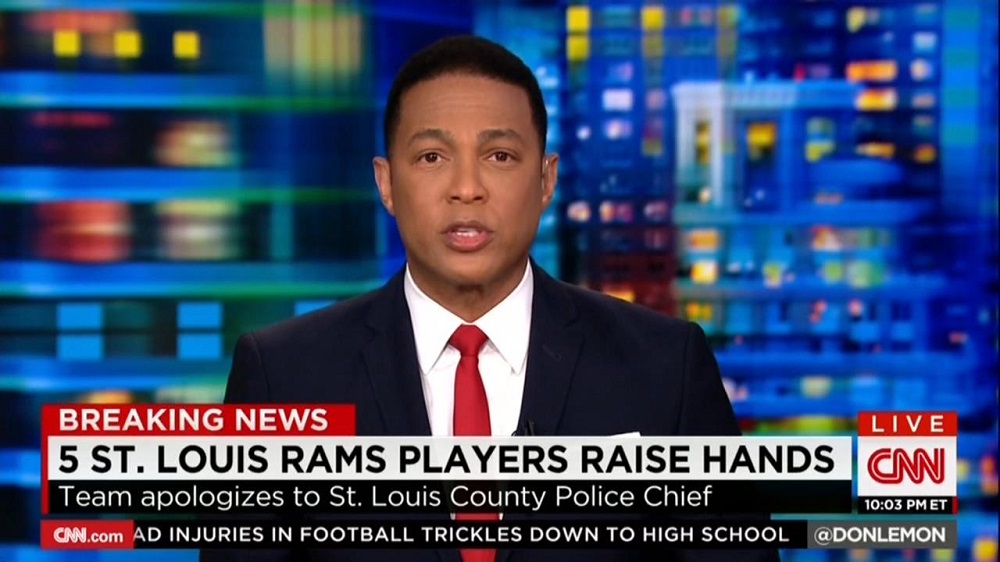 On Monday's CNN Tonight, Don Lemon refreshingly pointed out a problematic component of the Ferguson protests. During a discussion on the controversy surrounding the several St. Louis Rams players, who recently used the demonstrators' "hands up, don't shoot" pose, former police officer David Klinger pointed out that "all the forensic evidence indicates that it wasn't [Michael] Brown with his hands up standing still. All the evidence indicates that he was coming back at Officer Wilson."

Klinger added that "it's unfortunate that people are getting behind the 'hands up, don't shoot,' as opposed to we have grave concerns about the way that policing operates in the United States." Lemon replied to his guest by wondering, "So the question is, this 'hands up' rallying cry has – is it a false narrative that people are using to fit their own agenda?" [MP3 audio available here; video below]

The CNN anchor turned to Klinger and New Orleans Saints tight end Benjamin Watson for their reactions to the Rams controversy. Just minutes earlier, Lemon reported that the NFL team's management had apologized to the St. Louis police chief for the players' conduct, after the municipality's police union slammed their protest. He asked the former police officer, "Do you understand why police were so upset, and the apology to follow this evening?"

Klinger wasted little time before bringing up the forensic evidence, which has been regularly ignored in the media's coverage of the issue:

DAVID KLINGER, FORMER POLICE OFFICER: Absolutely. I understand why officers are upset. If you look at it from Darren Wilson's testimony, Mike Brown attempted to take his gun away, and the only reason you take a police officer's gun away is to kill him. So, in most officers' minds, who are now aware of the – that forensic evidence inside the vehicle, which supports Officer Wilson's story; the – the photographs of his face, which support his story – I can understand why officers are upset, because, in their mind, what we've got is a situation where an individual tried to murder a police officer; and the Rams's players are showing support.

Flipside of the coin: I'm basically a First Amendment absolutist in a situation like this. And I do understand that corporations have rules – so on and so forth. But I personally have absolutely no – no problem with people expressing their opinions, and – and these gentlemen expressed their opinion. I happen to think it's – it's foolhardy, because, at this point, all the forensic evidence indicates that it wasn't Mr. Brown with his hands up standing still. All the evidence indicates that he was coming back at Officer Wilson-

KLINGER: Now, whether that justifies the use of deadly force – we don't know – and there still are – are questions about that. But I think it's unfortunate that people are getting behind the 'hands up, don't shoot,' as opposed to we have grave concerns about the way that policing operates in the United States, and there are (sic) a lot of common ground about that. And there are areas where police and members of communities can come together to try to reform some things and make things better....That's what I think we should work for.

Lemon followed up with his "false narrative" question, which he addressed to his athlete guest. In his answer, Watson acknowledged that his fellow panelist made a good point:

DON LEMON: You touched on, David, the reason that many are surprised that there was no disciplinary action taken, because, basically, what you're saying is that the forensic evidence that came out of this grand jury – out of all the information that was released – the evidence is refuting the hands up – that he had his hands up. So the question is, this 'hands up' rallying cry has – is it a false narrative that people are using to fit their own agenda? That's the question. Ben?

The anchor is actually already in hot water with the supporters of Michael Brown's family, after his "obviously, there's a smell of marijuana in the air" observation as the riots broke out in Ferguson, Missouri the night of the grand jury's decision.