CNN Wonders If Ferguson Prosecutor Should 'Overrule the Grand Jury' 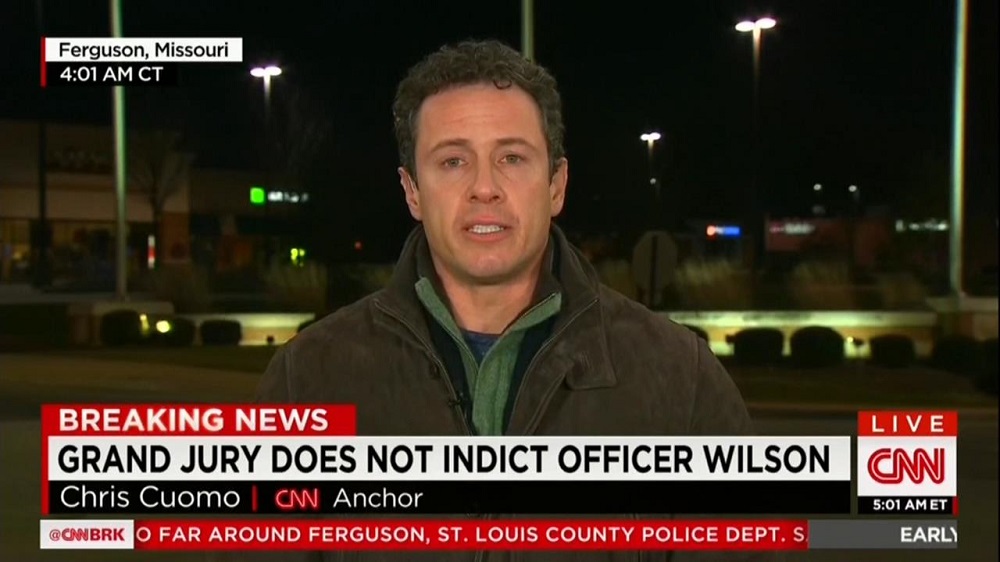 Two CNN anchors channeled the supporters of Michael Brown's family on Tuesday's Early Start, as they played up how St. Louis County, Missouri Prosecuting Attorney Robert McCulloch presented the Brown case to a grand jury, instead of pursuing charges himself. Chris Cuomo, reporting live from Ferguson, asserted that "the grand jury itself is a dinosaur," and pointed out that "the prosecutor could still bring charges even after the grand jury." [MP3 audio available here; video below]

Cuomo added that "one of the major complaints from sober minds here in Ferguson was that...if this prosecutor wanted to bring a case, he would just have brought it himself – that this was punting. You keep hearing the term 'punting' – to put this on a grand jury."

Early Start anchor Deborah Feyerick then forwarded her colleague's point during the following segment with Eric Zahnd, a prosecuting attorney from another country in the Show Me State:

DEBORAH FEYERICK: ...[W]e heard Chris Cuomo saying that basically, the prosecutor could have brought charges independently – that, in fact, by using a grand jury, he punted. Now, the D.A. has an ethical obligation to only bring those cases in which he thinks he can get a conviction. Could the prosecutor right now – say, basically, overrule the grand jury and say, charges should be filed – whether they be first-degree, second-degree, voluntary/involuntary manslaughter?

Mr. Zahnd replied by outlining that this would be highly-atypical move; and, moreover, that would it not satisfy the ethical standards of the judicial system:

ERIC ZAHND, PROSECUTING ATTORNEY, PLATTE COUNTY, MISSOURI: Theoretically, that could happen, but that would be highly, highly irregular. If a grand jury isn't even convinced that 12 people could find probable cause, I find it very hard to believe that a – that a prosecutor could say that he believes that a jury of 12 would find, beyond a reasonable doubt, that Officer Wilson committed a crime. And so, that would be very, very unusual, and I don't think he could satisfy his ethical burden in that situation.

What he did satisfy his ethical burden on is this: that a grand jury can be used to investigate whether a crime occurred – and that's exactly what this grand jury did. And, in the end, they found – apparently unanimously – that no crime had been committed.

The transcript of the relevant portion of the Chris Cuomo segment from Tuesday's Early Start:

DEBORAH FEYERICK: ...[T]he prosecutor was very clear. It's 12 men and women from the community [on the grand jury]. So, they had just as much interest in seeing that justice be served. But it's unethical for a prosecutor to bring a case if he believes he cannot get a conviction.

What's interesting is that so many of the protesters and demonstrators went after not only the police officers, but they went after community businesses themselves. And one captain basically said – you know, this is not the way you create jobs by destroying the dreams of small business owners. There's a lot of conflict there from all sides.

CUOMO: I think that assumes a deliberateness that isn't in place once you're blinded with rage. I think – you know, violence doesn't have a conscience – it's often been said. And in a community like this, I think you destroy what you see. It's wrong. It's illegal. It stands in stark contrast to what this outrage is supposed to be about – which was a failure of justice. You know, creating more injustice does not make that any better.

One of the major complaints from sober minds here in Ferguson was that – listen, if this prosecutor wanted to bring a case, he would just have brought it himself – that this was punting. You keep hearing the term 'punting' – to put this on a grand jury.

Look, whatever the feelings are about the process, the process is now over, and what this community have to – has to deal with, in a very real and ongoing way, will be how it deals with the outcome of this situation.

FEYERICK: Yeah – no question. You said five – you said the grand jury was unanimous – and Darren Wilson was facing five possible charges – and they decided not to indict him on any of them. Thanks, Chris.