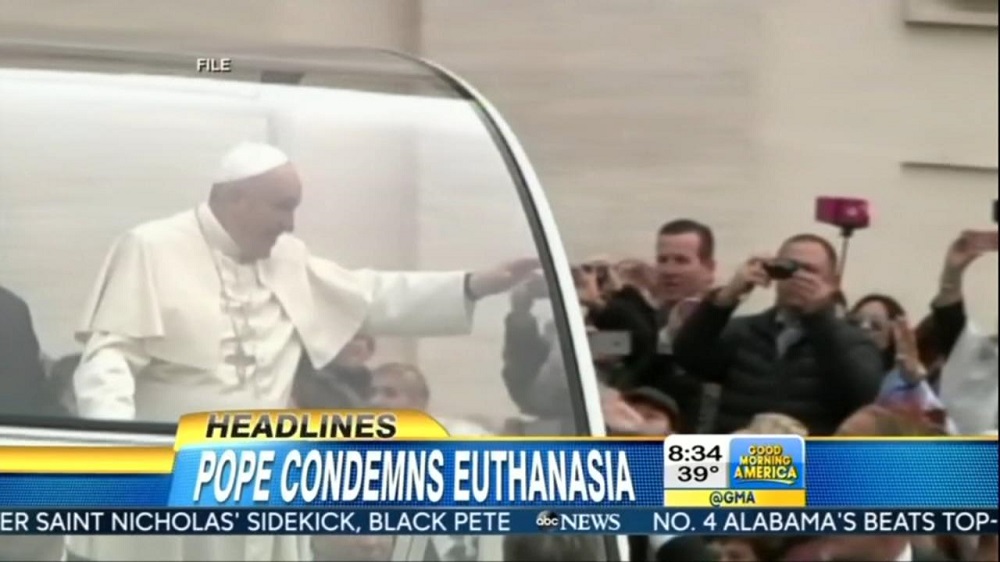 CBS and NBC's morning and evening newscasts on Saturday and Sunday ignored Pope Francis's condemnation of abortion, euthanasia, embryonic stem cell research, and in-vitro fertilization during a Saturday meeting with Catholic doctors in Italy. Their omission is glaring when compared to their hype over a supposed "seismic shift towards gays and divorcees" in a proposed document from a bishops' meeting – a draft which was ultimately rejected by the Church leaders.

Surprisingly, ABC's fluff-filled Good Morning America devoted nine seconds to the pontiff's speech, but only mentioned his targeting of euthanasia: [video below]

RON CLAIBORNE: And strong words from the Pope denouncing euthanasia – calling it a sin against God and creation. He said advocating a person's right to die is a false sense of compassion.

CURRY: While his predecessor [Cardinal Francis George] is seen as a combative conservative, Cupich echoes the Pope's more conciliatory message....And while he opposes abortion and same-sex marriage, he's discouraged priests from protesting at clinics performing abortions, and encourages respect for gay people. And he prioritizes caring for the poor....An emerging American face in Pope Francis's revolution, Bishop Blase Cupich says, is just getting starting.

The Bishop of Rome actually undermined Curry's assertions during his speech, as underlined the undeniable dignity of human life from conception to natural death, and called on the physicians to even be conscientious objectors if pressured to take part in immoral practices, like abortion and euthanasia:

...Attention to human life, especially that in greatest difficulty, that is, to the sick, the elderly, children, deeply involves the mission of the Church. The Church also feels called to participate in the debate that relates to human life, presenting its proposal based on the Gospel....in the light of faith and right reason, human life is always sacred and always "of quality". There is no human life that is more sacred than another - every human life is sacred - just as there is no human life qualitatively more significant than another, only by virtue of resources, rights, great social and economic opportunities....

The dominant thinking sometimes suggests a "false compassion", that which believes that it is: helpful to women to promote abortion; an act of dignity to obtain euthanasia; a scientific breakthrough to "produce" a child and to consider it to be a right rather than a gift to welcome; or to use human lives as guinea pigs presumably to save others. Instead, the compassion of the Gospel is that which accompanies in times of need, that is, the compassion of the Good Samaritan, who "sees", "has compassion", approaches and provides concrete help (cf. Lk 10:33). Your mission as doctors puts you in daily contact with many forms of suffering. I encourage you to take them on as "Good Samaritans", caring in a special way for the elderly, the infirm and the disabled. Fidelity to the Gospel of life and respect for life as a gift from God sometimes require choices that are courageous and go against the current, which in particular circumstances, may become points of conscientious objection. And this fidelity entails many social consequences. We are living in a time of experimentation with life. But a bad experiment. Making children rather than accepting them as a gift, as I said. Playing with life. Be careful, because this is a sin against the Creator: against God the Creator, who created things this way.

When so many times in my life as a priest I have heard objections: "But tell me, why the Church is opposed to abortion, for example? Is it a religious problem?" No, no. It is not a religious problem. "Is it a philosophical problem?" No, it is not a philosophical problem. It's a scientific problem, because there is a human life there, and it is not lawful to take out a human life to solve a problem. "But no, modern thought…" But, listen, in ancient thought and modern thought, the word "kill" means the same thing. The same evaluation applies to euthanasia: we all know that with so many old people, in this culture of waste, there is this hidden euthanasia. But there is also the other. And this is to say to God, "No, I will accomplish the end of life, as I will." A sin against God the Creator! Think hard about this.

As NBC touts the supposedly "revolutionary Pope," far-left feminist website Jezebel deplored Pope Francis's remarks: "On Saturday, Not-So-Cool Pope denounced euthanasia (in light of Brittany Maynard's death), abortion, in vitro fertilization, and embryonic stem cell research as 'a sin against the creator, against God the creator,' which in spite of all his recent groundbreaking statements is still incredibly disheartening. Pope, why you gotta be like that? " Writer Isha Aran then hoped that the Catholic cleric will soon "come to his senses about his idea of family. I mean what could be a better way to celebrate family than to perform a mass gay wedding...Or give women the choice to start their family when they're damn well ready?"