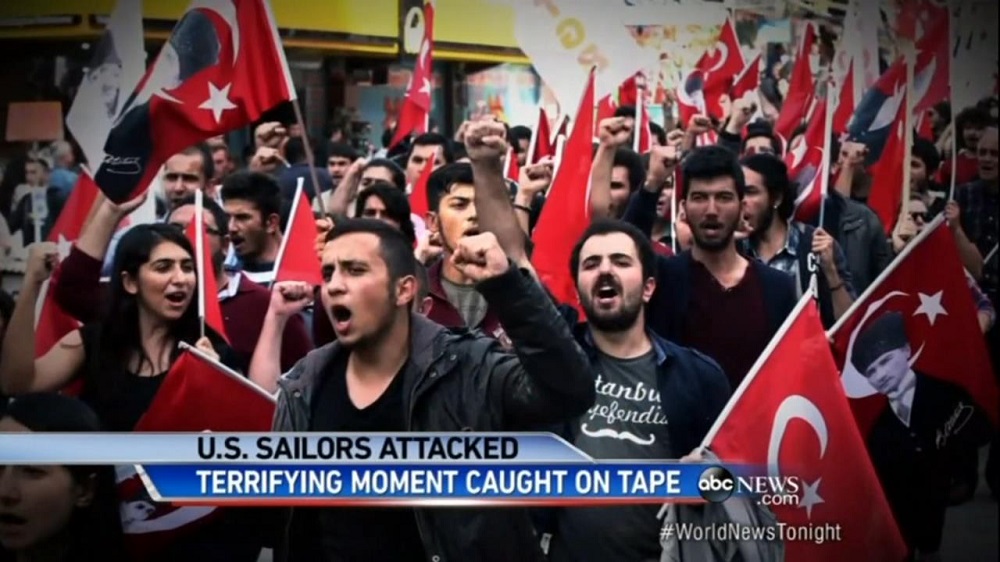 ABC, CBS, and NBC's evening newscasts on Wednesday glossed over the radical left-wing ideology of the Turkish protesters who assaulted three U.S. sailors in Istanbul earlier in the day. ABC's Martha Raddatz reported that the "the attackers [are] members of an ultra-nationalist group called the Turkish Youth Union, angry at what it calls 'American imperialism.'" NBC's Brian Williams underlined that "these were apparently the actions of a fringe group."

Most bizarrely, CBS's David Martin mentioned that "the anti-American student group....pushed and pelted...[the sailors, who] briefly had hoods slipped over their heads. Hoods have become an ugly symbol of the war between the West and Islamic terrorists." In reality, the Turkish Youth Union isn't Islamic, but secular. [MP3 audio available here; video below]

On NBC Nightly News, Williams devoted a news brief to the mob attack on the American servicemen:

BRIAN WILLIAMS: A disturbing piece of video making the rounds on the web and elsewhere today – it shows three U.S. Navy sailors from the guided missile destroyer U.S.S. Ross, which is docked in Istanbul right now. The Americans are dressed in civilian clothes, and are surrounded quickly by about a dozen activists calling them 'killers' – shouting for all of them to leave Turkey. They throw things at the sailors. At one point, they put a bag over one of their heads. The Americans do not retaliate. They don't fight back. They're then chased, as they try to get away peacefully.

A member of our team, who lives there, cautions that these were apparently the actions of a fringe group done for the benefit of cameras. And Turkey, an American ally, is generally hospitable to Westerners.

NBC News.com's Wednesday article on the incident actually did something that the anchor didn't – report the political ideology of the demonstrators:

The Turkish Youth Union is described as a left-wing nationalist revolutionary group opposed to "American imperialism."...[the] Union said on its official website that the public harassment was in support of Turkish martyrs and meant to protest the deaths of those 'killed by imperialism.' While anti-American sentiment is not pervasive in Turkey, some have disagreed with the U.S.'s military involvement in the region.

ABC's World News Tonight led its broadcast with Raddatz's report on the group's assault on the sailors. Anchor David Muir teased the segment by wondering, "Who was behind this?" The correspondent used her "ultra-nationalist" term as she mentioned the group behind the attack:

MARTHA RADDATZ: ...The attackers, members of an ultra-nationalist group called the Turkish Youth Union, angry at what it calls 'American imperialism.' They shot the video, and released it for all to see. The group used the bags in an apparent reference to a 2003 incident in Iraq, when U.S. forces detained a group of Turkish soldiers – putting hoods over their heads.

During his report on CBS Evening News, Martin twice used the label "anti-American." But like Williams and Raddatz, the journalist failed to give the far-left ideology of the protesters:

DAVID MARTIN (voice-over): The Pentagon called it 'ugly and disturbing.' But the anti-American student group, which assaulted three U.S. Navy sailors dressed in civilian clothes while on shore leave in Istanbul, boasted about it by posting this video.

UNIDENTIFIED MALE PROTESTER (from online video): We define you as murderers, as killers. We want to – we want you to get out of our land, or will – we will-

MARTIN: The three sailors, members of the crew of the guided missile destroyer Ross, kept their cool as they were pushed and pelted, and briefly had hoods slipped over their heads. Hoods have become an ugly symbol of the war between the West and Islamic terrorists. So just to be sure you didn't miss it, the protesters slowed the video down.

The sailors made a break for it, pursued by the classic anti-American chant- (clip of protesters chanting, "Yankee, go home!") They made it back to their ship without injury. The Ross posted guards, and all shore leaves were canceled until the ship leaves port on Thursday.

MARTIN (on-camera): Turkish police arrested some of the demonstrators – although U.S. officials do not believe they actually intended to harm the students (sic). Both sides are trying to treat it as an isolated incident.