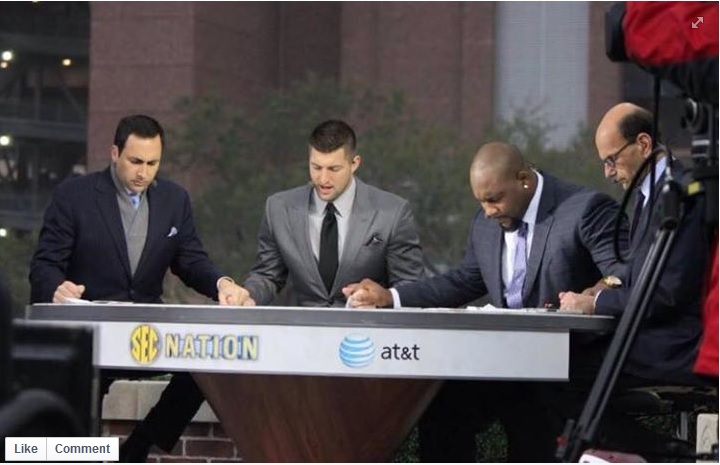 Somewhere, sometime last Saturday morning, a liberal sports blogger sensed a disturbance in the Force. Somewhere else, across the country perhaps, a militant atheist’s encroaching theocracy senses tingled. Could it be?

And the terrifying answer is yes. Tim Tebow was back, and – ready the fainting couches – he was praying! In public, sort of! And he was caught on camera by another Christian!

Tebow was on the set of “SEC Nation” on the SEC Network for his regular analyst gig. Before going on the air he joined hands with his co-hosts and led a brief prayer. Christian recording artist Tanner Clark was on set and snapped a photo, which he shared on social media.

The picture is destined to be taped to dart boards in sports newsrooms around the country. As a Heisman Trophy winner and two-time national champion with the Florida Gators, Tebow earned lefty scorn for having the temerity to wear his Christian faith on his sleeve. The hate followed him into the NFL, where sportswriters, bloggers, and even progressive Rabbis hoped he’d fail.