Here's a Lesson from Jorge Ramos's Detention by Maduro: Venezuela Is Not Iowa

The detention of a Univision News team, headed by senior anchor Jorge Ramos, at Venezuela’s presidential palace serves to showcase the very real and present risks that are concomitant to the practice of journalism. Unfortunately, it also has the potential of birthing some very bad takes.

Since MRC Latino’s inception, we’ve noted a weird dichotomy wherein Univision’s news operation seems to run with a reliably liberal slant on U.S. domestic issues, yet is solidly anti-communist when it comes to Latin American affairs.

And so it is that Ramos went into Venezuela’s presidential palace, sat down with the tyrant Maduro, and asked tough questions of him to the point of getting himself and his team arbitrarily detained. Some of the reaction to this illegal detention was discomfiting. It bears noting and remembering that this was an American news crew (regardless of editorial slant and broadcast language) being illegally held by a brutal dictatorial regime that has seized or closed hundreds of local media outlets in an effort to control what is said about the regime. Any celebratory or karmic tones witnessed on social media were beyond the pale. If anything, we should celebrate their prompt release given the grim alternatives.

Unfortunately, some (including the anchorman’s daughter Paola Ramos who on Twitter denounced both Trump and Maduro as “dictators”) pounced upon the opportunity to leverage this incident into a cheap point-scoring opportunity against President Trump, by suggesting that this incident is somehow similar to Trump's 2015 ejection of Ramos from an Iowa press conference. 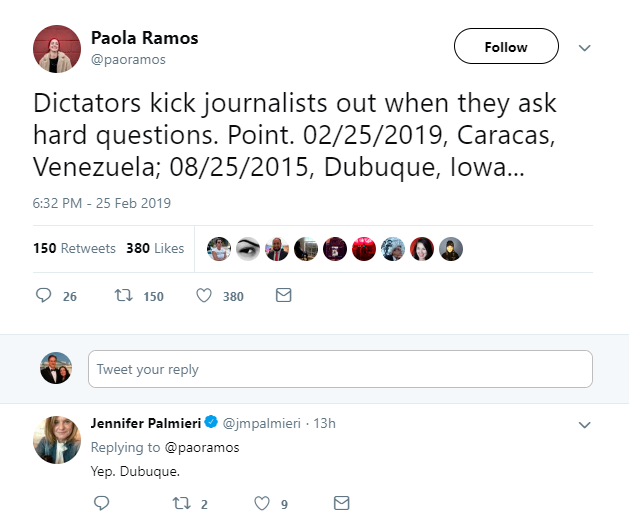 Nothing could be further from the truth. Maduro literally held Ramos and crew; and seized their equipment while inflicting psychological torture on the Univision News crew - all for the sin of asking uncomfortable questions. To suggest that this is somehow similar to Trump’s ejection of Ramos of the press conference for breaking protocol and heckling, only to bring him back minutes later and take his questions, minimizes the gravity of what actually happened in Caracas and threatens to erode whatever goodwill Ramos rightly deserves for having endured such an outrageous act of journalistic repression.

The only proper takeaway from this incident is that these actions are the last gasps of a dying regime that struggles to hold power by any means necessary against the will of a people that yearn to be free after two decades of misery, starvation, and death. Anything else is just noise and nonsense.