As the fear of the Wuhan Coronavirus drove the market downturn, MRC Latino analyzed the economic coverage for the four most viewed Spanish News networks in the US (Noticiero Univision, Noticiero Telemundo, CNN en Espanol, and Noticiero Estrella TV) from February 25 through March 24, 2020.

The results showed a clearly disproportionate coverage of market downturns, with a total of 29 minutes of negative coverage representing 91.5 percent of news on the stock market. 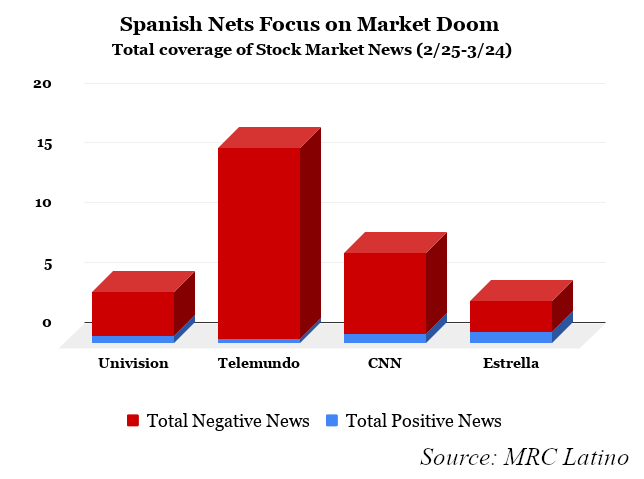 Telemundo, despite constantly telling its viewers not to worry, is most guilty of using the Stock Market plunge as a fear-mongering tactic, only mentioning market rebounds for 20 seconds- in comparison to 16 entire minutes on what could happen with businesses, Hispanic jobs, and international trade.

Of course, the Spanish Language networks want to give economic news a fair share of coverage now that the markets have gone sour. It bears remembering that Spanish-language media gave little to no coverage to the recent booming job growth and record Hispanic unemployment numbers.

This may be an early sign of what is to come as the nation begins to recover from this global pandemic. Spanish-language media appear to mirror their liberal media counterparts, pushing propaganda and grim financial news.