On Saturday and Sunday, the “big three” (ABC, CBS, and NBC) networks vigorously condemned a new Indiana law that would protect private businesses from government infringement on their religious freedom. Rather than provide balanced coverage of the Indiana bill, the networks eagerly trashed the legislation as opening “the door to discrimination against gays and lesbians.”

From Saturday morning through Sunday morning, the "big three" devoted 14 minutes and 24 seconds to the Indiana legislation and other than soundbites from Governor Mike Pence (R-Ind.), CBS was the only network to provide clips of individuals fully defending the religious freedom legislation.

The overwhelmingly one-sided attitude against the Indiana law comes on the heels of Friday night’s CBS Evening News which touted the “growing backlash” against the law. On Saturday’s NBC Nightly News, fill-in anchor Peter Alexander played up how after Governor Pence signed the bill into law “the backlash was immediate and severe” before he turned to reporter Gabe Gutierrez to provide a biased report against the law:

The backlash has spread across social media. Apple's CEO tweeting, “Apple is open for everyone. We are deeply disappointed in Indiana's new law.” Ahead of next weekend's Final Four in Indianapolis, the NCAA released a statement. “We are especially concerned about how this legislation could affect our student athletes and employees.”

During Saturday’s World News Tonight, ABC’s Cecilia Vega introduced the broadcast by hyping how “a new Indiana law has some big names threatening a boycott and now calls for the governor to step down.” 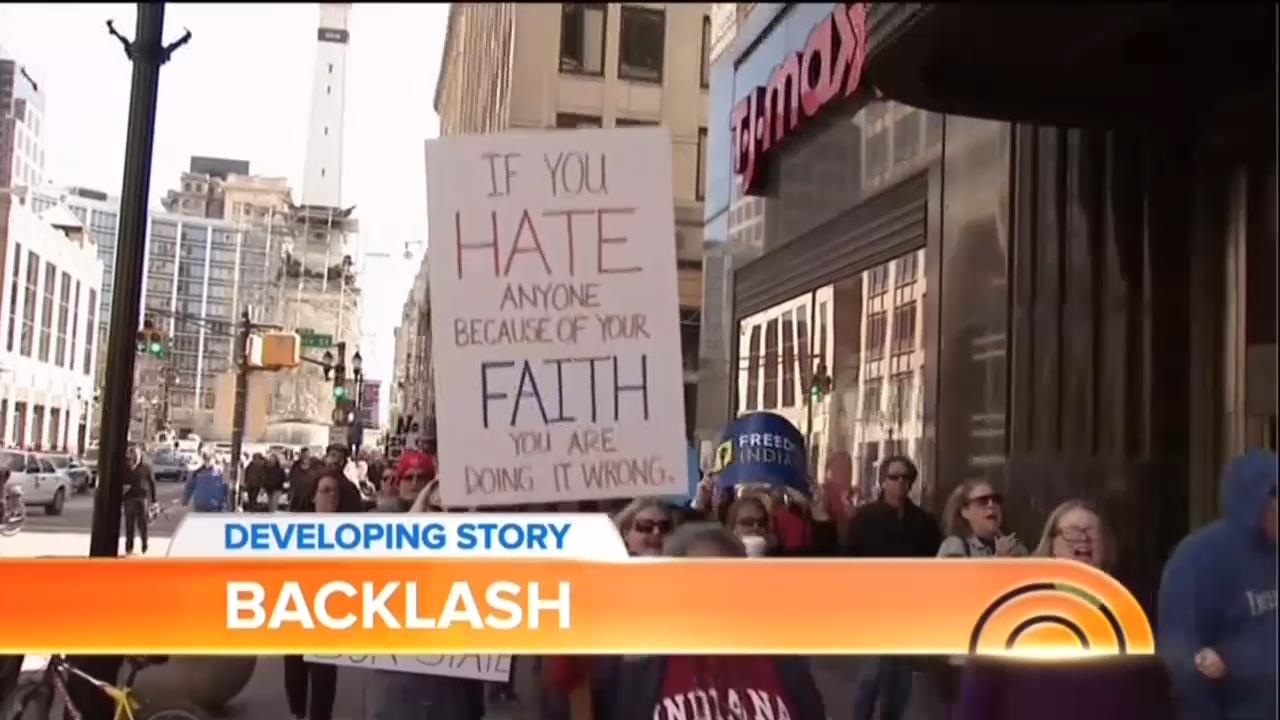 The ABC anchor then turned to reporter Ron Claiborne to promote how “the new law triggered a powerful backlash. From celebrity Miley Cyrus to Hillary Clinton to business giants like Apple's Tim Cook who feet tweeted “we are deeply disappointed in Indiana's new law.”

Claiborne concluded by making sure to further sympathize with the law’s opponents:

Opponents of the new law it will legalize instances like the one in Oregon in which a baker refused to make a wedding cake for a lesbian couple. He faces a $100,000 fine payable to the couple. Tonight the negative reaction has been fierce and stunning and it could cost Indiana millions in business and tourism.

On CBS This Morning: Saturday, reporter Adriana Diaz was the only network reporter to speak to someone who fully supports the legislation, including State Senator Scott Schneider, but Diaz made sure to surround soundbites of the law’s defenders with those who condemn it:

ADRIANA DIAZ: Governor Mike Pence signed the religious freedom bill that protects individuals and businesses from government interference when following their religious beliefs. But homosexuals like Angie Alexander and her wife Cynthia believe it's an invitation to discriminate by refusing service.

ANGIE ALEXANDER: You know, we don't know what restaurants or what stores we can go into and not be turned and way and have to suffer. You know, that’s degrading. It's embarrassing.

On Sunday’s Good Morning America, ABC reporter Gio Benitez proclaimed that “some big names” like Miley Cyrus are “joining the protestors on social media” and even promoted how “Seattle's mayor banning travel to the state of Indiana for city business.”

See a sample of the network transcripts below.

[Tease]
ERICA HILL: Backlash. Outrage growing this morning over a controversial new law in Indiana. Some say it protects religious freedoms while many protesters say it goes too far, in their eyes legalizing discrimination. Now the governor says he may give it another look.
--

PETER ALEXANDER: New legislation in Indiana could be coming as early as this week as the backlash grows over a controversial new law. Supporters say it protects religious freedoms while opponents insist it legalizes discrimination. We get the latest from NBC's Gabe Gutierrez.

REBA BOYD WOODEN: It allows people to use their religious belief to discriminate against other people and that’s wrong.

GUTIERREZ: In a new interview with the Indianapolis Star, Governor Mike Pence says that he would support new legislation this week to “clarify the intent” of the bill he signed on Thursday allowing businesses to deny service bases on their religious beliefs.

MIKE PENCE: This is not about legalizing discrimination. It’s about restricting the government's ability to intrude on the religious liberty of our citizens.

GUTIERREZ: Indiana is now 1 of 20 states with similar laws. But opponents argue it would legalize discrimination after the state's ban on same-sex marriage was overturned last year. With basketball on the minds of many fans ahead of next weekend's Final Four in Indianapolis, the NCAA says “we are especially concerned about how this legislation could affect our student athletes and employees.” Former NBA stars Charles Barkley and Reggie Miller are slamming the law and backlash is also spreading across social media. Apple's CEO tweeting “we are deeply disappointed in Indiana's new law.” This weekend, Indiana-based website Angie's List announced it was putting expansion plans on hold.

BILL OESTERLE: I will say categorically we don't favor the legislation at all.

LISA SCHWIRE: I have thought a lot about this. I am a strong Christian.

GUTIERREZ: She opposes same-sex marriage, but.

SCHWIRE: If someone walked in my store, I think I would serve them.

[Tease]
CECILIA VEGA: Backlash in the Hoosier state. From high tech to Hollywood. Why a new Indiana law has some big names threatening a boycott and now calls for the governor to step down.
-- 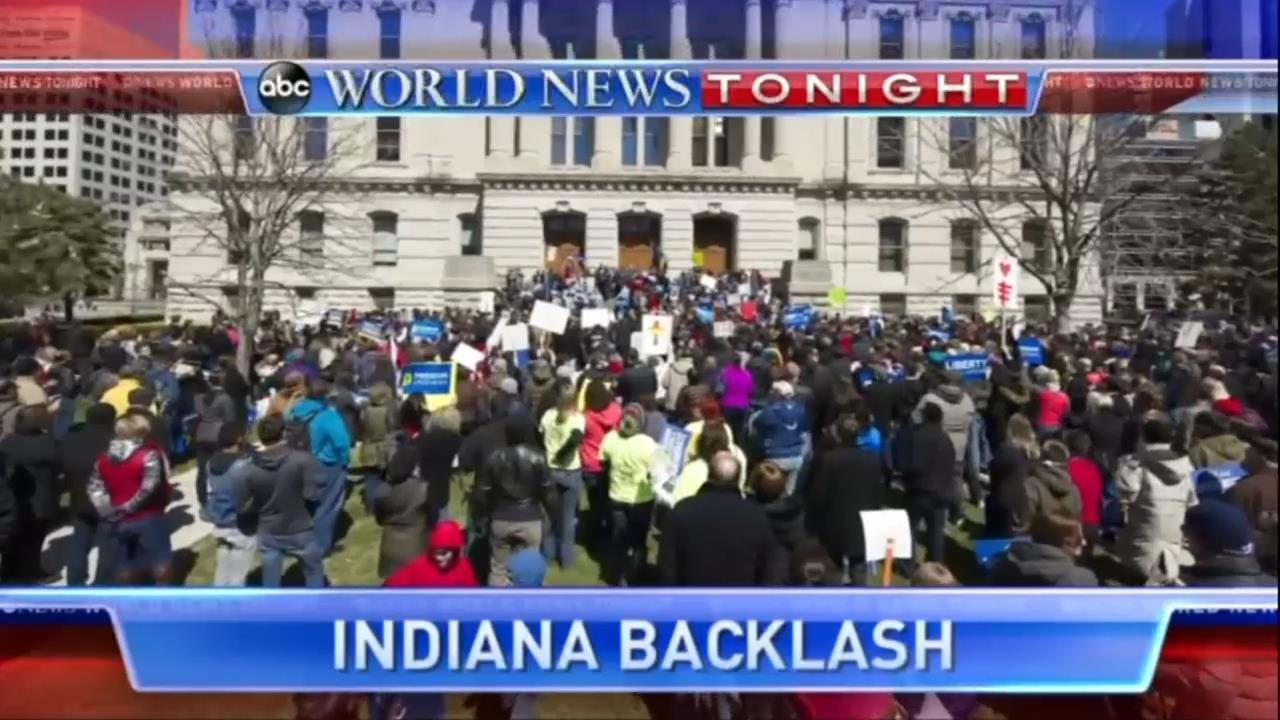 CECILIA VEGA: And in Indiana to a growing political scandal of a different kind. Some say the Hoosier state’s new religious freedom law opens the door to discrimination against gays and lesbians. And now the protests are growing louder by the day with big names from Hollywood to high tech calling for a boycott. Here's ABC's Ron Claiborne.

RON CLAIBORNE: In Indianapolis today, hundreds turned out to protest the state’s new law that they say will legalize discrimination against gays. On Thursday, Indiana Governor Mike Pence signing the so-called religious freedom restoration act which supporters say will allow businesses and individuals to refuse service to someone if it violates their religious values.

MIKE PENCE: If I thought it was about discrimination I would have vetoed it.

CLAIBORNE: But the new law triggered a powerful backlash. From celebrity Miley Cyrus to Hillary Clinton to business giants like Apple's Tim Cook who feet tweeted “we are deeply disappointed in Indiana's new law.” And today, Angie's List canceling a major business expansion. Gen Con threatening to withdraw a huge annual gaming convention worth $50 million to the local economy from Indianapolis.

And the NCAA, headquartered in Indianapolis, and site of next weekend's Final Four expressed its concern. Opponents of the new law it will legalize instances like the one in Oregon in which a baker refused to make a wedding cake for a lesbian couple. He faces a $100,000 fine payable to the couple. Tonight the negative reaction has been fierce and stunning and it could cost Indiana millions in business and tourism. Ron Claiborne, ABC News, New York.

JIM AXELROD: Good evening. I'm Jim Axelrod. We begin tonight in Indiana, the latest flashpoint in a national debate about freedom and discrimination. Two days ago, Indiana's Governor Mike Pence, surrounded by nuns, Franciscan monks and orthodox Jews, signed something called the Religious Freedom Restoration Act into law. Going into effect in July, it protects the right of people or businesses to follow their religious beliefs. Today, hundreds of people gathered at the state house in Indianapolis to protest, saying the law sanctions discrimination against gays and lesbians. As Adriana Diaz reports, this backlash is building.

ADRIANA DIAZ: More than 700 protesters turned out at the state capital today to voice their fears that the new law could give businesses the right to refuse to serve gays and lesbians under religious grounds. Rachel Cowgill and Amy Knopf have been married for 15 years.

RACHEL COWGILL: I don't want my child living in an environment where she's made to feel like her family is somehow less than other families. 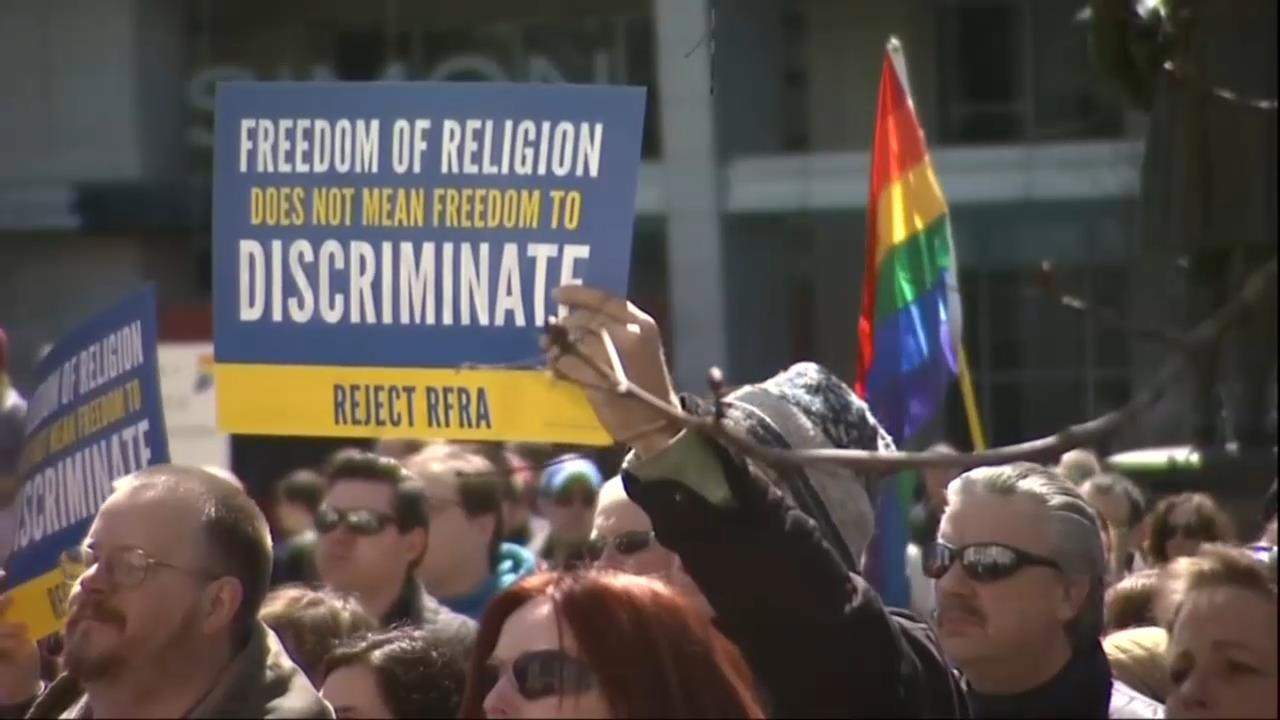 DIAZ: Today's protests echoed growing opposition online as companies from Apple to pharmaceutical giant Ely Lilly took to social media to express reservations about the law. Angie's List said it would delay expanding into Indiana “until we fully understand the implications of Freedom Restoration Act on our employees.” Salesforce.com has already canceled planned events in Indiana. Rachel Cowgill for salesforce.com. She and Amy fear for their family and their jobs.

COWGILL: Both of our employers have started sending out notices about not wanting to be here.

DIAZ: Indiana's chamber of commerce is urging businesses not to pull out of the state, but some business owners, like custom leather maker Casey Sampson, support the law.

MIKE PENCE: This is not about legalizing discrimination. It's about restricting the government's ability to intrude on the religious liberty of our citizens.

DIAZ: The opposition to this law just keeps growing. Jim, basketball commentator Charles Barkley now says big events shouldn't be held in any state with what he calls “anti-gay legislation.” The Final Four is set to take place next weekend here in Indiana.