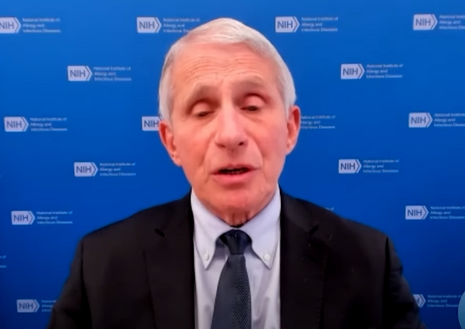 MRC Free Speech America found at least eight major publications that seemed to have respective major epiphanies on the importance of data privacy. Once the news broke that the U.S. Supreme Court would — and eventually did — overturn the infamous pro-abortion Roe v. Wade (1973) decision, liberal outlets like The Washington Post, The New York Times, BuzzFeed News and Fortune went into apparent shock and hypocritically warned about Big Tech’s threat to women’s abortion-related data privacy.

But these same outlets sang a different tune when it came to data privacy and contact tracing during the COVID-19 pandemic.

In most of the examples MRC found, the headlines alone told the story of how the liberal media narrative on data privacy have shifted since the Supreme Court overturned Roe.

The Post threw any veneer of logical consistency out the proverbial window. The publication was quick to warn abortion-committing readers about potential threats to their data in at least four stories.

A July 1 story was pretty on the nose with the scare-mongering: “Okay, Google: To protect women, collect less data about everyone.” The Post sounded the alarm bells in its sub-headline: “In post-Roe America, Google searches and location records can be evidence of a crime. Here are four ways Google should protect civil rights in its products now.”

One June 29 story was headlined: “Abortion is illegal for millions. Will Big Tech help prosecute it?” Another June 29 story fretted: “You scheduled an abortion. Planned Parenthood’s website could tell Facebook.”

In the latter piece, The Post complained that if people used the baby-slaughter giant’s “online scheduling tool, it appears Planned Parenthood could share people’s location — and, in some cases, even the method of abortion they selected — with big tech companies.” A June 26 story sought to give tips to abortion seekers on how to cover up their digital trails: “Seeking an abortion? Here’s how to avoid leaving a digital trail.”

The Post’s warning to abortion-seekers about “leaving a digital trail” is a complete departure from the same publication’s celebration of the wonders of digital contact tracing in a June 14, 2020 story headlined: “Contact tracing is ‘best’ tool we have until there’s a vaccine, health experts say.” The Post, before it did a 180-degree turn on the data privacy issue because of Roe’s overturning, propagandized during the pandemic that “contact tracing is key. But doing it effectively will take an army of people that need to be hired and trained.” [Emphasis added.]

“Today’s far more extensive undertaking [on contact tracing] will require 100,000 or more trained tracers to delve into strangers’ personal lives and persuade even some without symptoms to stay home,” The Post claimed. So much for privacy.

BuzzFeed News was one of the worst of the eight outlets when it comes to hypocrisy on protecting data privacy. Following the U.S. Supreme Court ruling on Roe, BuzzFeed sounded the Big Brother alarm for women seeking abortions in a story headlined: “In A Post-Roe America, Googling ‘Abortion’ Could Put You At Risk. Here’s How To Protect Yourself.” BuzzFeed used woke language on gender in an apparent attempt to scare readers: “[P]regnant people who are trying to obtain abortions in the 23 states set to ban it will have to contend with a digital surveillance apparatus that could be used against them.”

Contrast BuzzFeed’s scaremongering about a “digital surveillance apparatus” with its April 29 2020 story headlined: “We Need An ‘Army’ Of Contact Tracers To Safely Reopen The Country. We Might Get Apps Instead.” BuzzFeed’s primary complaints with a “digital solution” for contact tracing were that it was decentralized, didn’t go far enough and was hamstrung by people’s privacy concerns. “An attempt to automate the process by layering in the use of smartphone technology, meanwhile, has been complicated in the US by privacy concerns and the lack of a centralized approach,” the publication wrote in April 2020. [Emphasis added.]

Over at Fortune magazine, the outlet praised COVID-19 contact tracing apps as a smashing success in a May 14, 2021 story headlined: “Contact tracing apps saved thousands of lives, says a new study.” This dubious praise for digital Big Brother stands in stark contrast to how Fortune handled the post-Roe issue in its June 27, 2022 story: “Tech companies have gone silent on data privacy since Roe v. Wade was overturned. When will they speak up?” What a joke.

Lo and behold, CNN was no better. The leftist outlet heralded demands by U.S. lawmakers May 25, 2022 that “Google should limit location data collection to protect abortion seekers, US lawmakers say” after the leak of a draft SCOTUS opinion revealing the high Court’s intent to dismantle Roe. CNN’s apparent concern over data collection came more than two years after the same publication celebrated how Google and Apple were “working together to help track the coronavirus” via digital contact tracing.

The MIT Technology Review released two competing headlines within just over a year showing how the publication flopped like a fish on the issue of data privacy. On the abortion issue, the Review fretted June 28, 2022: “Big Tech remains silent on questions about data privacy in a post-Roe US.” But when it came to COVID-19 on Feb. 24, 2021, the Review ignored any concerns about data privacy and touted digital contact tracing: “Digital contact tracing brought tech rivals together while the pandemic kept us apart.”

The New York Times also couldn’t get its act together on the issue of data privacy. On Oct. 3, 2020, The Times called contact tracing the “key to reigning in the virus” and whined that such efforts were falling flat in the United States and Europe because of privacy rules. “Beholden to privacy rules, Western officials largely trusted people to hand over names to contact tracers,” the newspaper bleated.

It praised how contact tracers in countries like Taiwan and South Korea were using “cellphone and credit card data to identify people who were potentially exposed.” It then complained: “But in Europe and the United States, which have largely relied on the public to provide information and follow quarantine rules voluntarily, the response has been spotty.”

But when it came to the abortion issue after the Supreme Court ruling overturning Roe was handed down, The Times switched gears and mourned how data left us vulnerable online in a June 29, 2022 story headlined: “Our Data Is a Curse, With or Without Roe.” The newspaper fretted that the Supreme Court ruling on abortion was “a moment to reflect on what we have given up to the hungry maw of America’s unfettered data collection economy.” It doesn’t appear that privacy concerns over an “unfettered data collection economy” were as much of a big deal for The Times when it came to COVID-19.

Don’t expect consistency from Bloomberg News, either. Two headlines from the outlet show the publication contradicts itself on data privacy, depending on the subtext. Here’s a Bloomberg News story on abortion privacy post-Roe: “Privacy Advocates Offer Tips on Protecting Abortion Data.” Now check out a story from the same publication about COVID-19 contact tracing: “The World Embraces Contact-Tracing Technology to Fight Covid-19.”

That story fawned how "[g]overnments want to get people back to work, and a key part of this is contact-tracing technology that helps authorities track the virus and warn citizens who may be infected to stay home or get tested." [Emphasis added.]

MRC only needed to dig up two tweets from Axios to show the outlet’s hypocrisy when it comes to data privacy.

Here’s Axios’s tweet on abortion data following the SCOTUS ruling: “Privacy experts fear the Supreme Court's decision to overturn federal abortion rights will erode other key protections and expose daily life online to criminal investigations.” Now here’s Axios’s tweet on contact tracing during the COVID-19 pandemic: “Widespread contact tracing will be key to the next phase of our coronavirus response, but the U.S. is severely behind.” 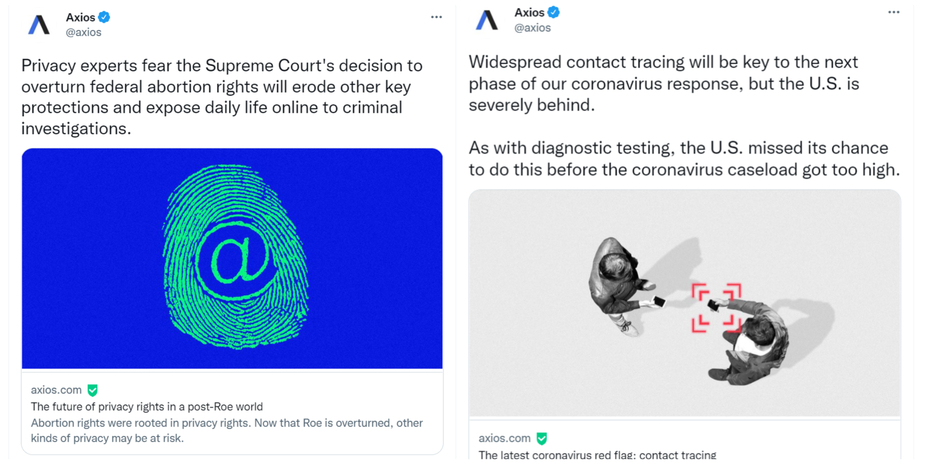