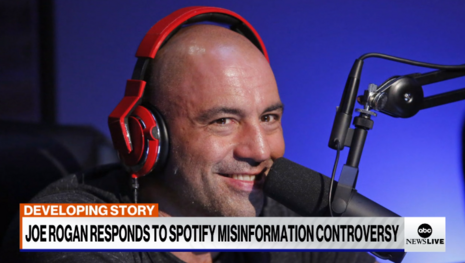 The left has repeatedly vilified Malone and McCullough for scientifically dissecting many touted COVID-19 narratives. By calling for Rogan to be banned, leftists have made it clear that anyone who disagrees with them shouldn’t have a platform to speak freely.

Ironically, some leftists used social media to complain about Rogan’s online speech. Liberal research director of Harvard Kennedy School’s Shorenstein Center and Technology and Social Change project head Joan Donovan complained on Twitter, “The problem isn’t the policies, it’s Rogan as a product of Spotify.” She added in a tweet a day later: “These are the conditions that create incentives for employee leaks.”

Personalities from around the world jumped on the ban-wagon. Prince Harry, Duke of Sussex and his wife Meghan Markle, who also use Spotify, reportedly joined in criticizing the platform for allowing so-called COVID-19 “misinformation” through their foundation Archewell. Culture writer for UnHerd Kat Rosenfield lamented on CNN’s Reliable Sources that Rogan is “like a weed that sprang up outside the mainstream media ecosystem.”

CNN's Oliver Darcy spoke of “viral lies” and commented, “Consider the fact that we are nearly six years from the 2016 election, when the issue of misinfo really surfaced in an unavoidable way, and some tech companies are still having incredibly difficult problems establishing basic protocols.” Tech journalist and podcaster Kara Swisher also endorsed more censorship from Spotify, tweeting, “Interesting that a thing once called editing for facts became being a content censor.” The 1619 Project author Nikole Hannah-Jones bashed what she called the “racist tropes” of Joe Rogan on Twitter.

Rock artist Neil Young first kicked off the effort to Remove Rogan by demanding Spotify choose him or Rogan. The ultimatum backfired for Young, as Spotify reportedly unabashedly chose Rogan; “We regret Neil’s decision to remove his music from Spotify, but hope to welcome him back soon.” Young claimed that Spotify has “become the home of life threatening COVID misinformation.” Fellow musician Joni Mitchell also removed her music from Spotify, expressing “solidarity” with Neil Young. And Spotify reportedly had to shut down its live customer support after receiving a flood of complaints concerning Joe Rogan.

So far, Spotify’s only major concession to the censorship pressure was to introduce COVID-19 “content advisories” to podcast episodes.

Many “theories” were aggressively dubbed “misinformation” earlier in the pandemic, such as the lab leak theory of COVID-19 origins and the fact that vaccinated individuals can contract COVID-19. These same “theories” have now been shown to be plausible or true, and authorities have now acknowledged the veracity of emergent facts. Furthermore, while a letter to Spotify from medical and scientific professionals has hundreds of signatures, over 17,000 scientific and medical professionals have signed the Rome Declaration condemning many touted COVID-19 measures.

Conservatives are under attack. Contact your representatives and demand they support free speech. Big Tech giants should afford their users nothing less than the free speech embodied in the First Amendment. If you have been censored, contact us using CensorTrack’s contact form, and help us hold Big Tech accountable.