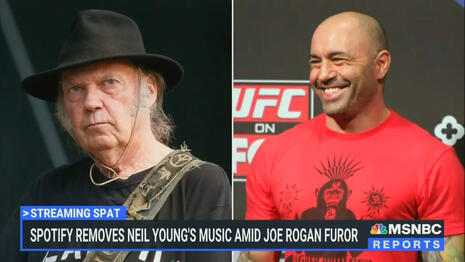 Old man, look at your life. Spotify noted in a response to the once-legendary Canadian-American singer’s ultimatum that it regrets Young’s decision to remove his music from the platform’s library. “We want all the world’s music and audio content to be available to Spotify users. With that comes great responsibility in balancing both safety for listeners and freedom for creators,” Spotify wrote, according to a Jan. 26 TechCrunch article.

“We regret Neil’s decision to remove his music from Spotify, but hope to welcome him back soon,” the statement added. The email revealed one number that might terrify those who actually care about free speech, however: “We have detailed content policies in place and we’ve removed over 20,000 podcast episodes related to COVID since the start of the pandemic.”

Young explained on his website his rationale for the ultimatum. He suggested that Spotify, by merely allowing famous podcasters to have open conversations about the developing pandemic, was engaging in some kind of moral hazard:

“Most of the listeners hearing the unfactual, misleading and false COVID information on SPOTIFY are 24 years old, impressionable and easy to swing to the wrong side of the truth. These young people believe SPOTIFY would never present grossly unfactual information. They unfortunately are wrong. I knew I had to try to point that out.”

Young may have drastically overestimated his popularity and influence, however, as was observed by Forbes in an article headlined: “Social Media Users Ask 'Who Is Neil Young' After Singer Demanded His Music Be Removed From Spotify.” Forbes contributor Peter Suciu observed that Spotify’s reaction “wasn't likely the response that Canadian singer Neil Young expected.” The article noted further that “‘Who is Neil Young’ was trending on social media, with many users mockingly pondering who he is, while others expressed faux shock that he was still alive (and possibly rocking in the free world).”

Earlier this week, the questionably relevant singer issued his ultimatum to Spotify in a letter. “Neil Young posted a since-deleted letter to his management team and record label demanding that they remove his music from Spotify,” Rolling Stone reported Jan. 24. “‘I want you to let Spotify know immediately TODAY that I want all my music off their platform….They can have [Joe] Rogan or Young. Not both.”

Young later accused Spotify of “‘spreading fake information about vaccines” and “potentially causing death to those who believe the disinformation,’” according to the magazine.