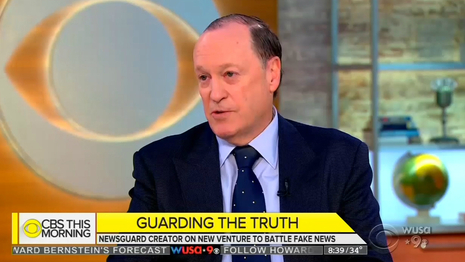 NewsGuard CEO Steven Brill this week painted his company as a white knight that can save impressionable dupes from repeating another Jan. 6 “insurrection,” and said Fox News and OANN traffic in conspiracy theories.

Brill tried to represent his company as an unbiased ratings company, but inadvertently made clear his company has a liberal agenda. He even defended calling the Jan. 6 riots an “insurrection.”

“If you look at the reports that were written by people who participated in the insurrection of January 6, what you see, by and large, is that most of those people were people who were ordinary American citizens,” Brill said on C-SPAN Wednesday. “A fireman from Staten Island; there was a construction worker in Ohio who just read stuff online and started going down rabbit holes, and ended up with extreme beliefs that they didn’t start with.”

But several MRC reports have found that NewsGuard systematically downgrades “right” or “lean right” content while elevating “left” or “lean left” content. That includes pro-life and pro-choice sites, and higher ratings for Chinese state-run media than three pro-life news sites. NewsGuard also continues to rate BuzzFeed News with a perfect 100/100 score, even though the outlet hasn’t retracted its story that publicized the discredited Russia dossier.

The “way to deal” with ideas that allegedly foment an “insurrection” is “not the government interfering, it’s giving those people more information about what they’re reading before they go down those rabbit holes,” Brill said.

But NewsGuard benefits from government calls for censorship, because the current culture of information-policing helps to justify NewsGuard’s existence.

Based on the backing that NewsGuard has from these prominent politicians, it’s objectively difficult to believe that Brill actually wants the government to restrain itself.

Later in his interview, Brill undercut his own credibility by claiming Fox News and OANN of trafficking in conspiracy theories.

“Imagine if we watched the Moon Landing,” he said. “Today, you would have, whether it was Fox or OANN or something like that, they would say, ‘It is a fraud. Biden did not really achieve that.’ MSNBC might have a whole different take on it. No one would agree, even on the most basic news information.”

One caller to the live C-SPAN show asked Brill why he referred to the Jan. 6 riot as an “insurrection.”

“I saw hundreds of people overrunning the Capitol, breaking windows, attacking police officers, and all for the purpose of blocking the confirmation of the election results,” Brill said. “I think it’s fair to say that characterizing that as an insurrection is not unreasonable.”