NewsGuard has reaffirmed its perfect rating of BuzzFeed News, even though the outlet continues to host the bogus Steele dossier on its website.

In an email to MRC, NewsGuard General Manager Matt Skibinski justified his company’s perfect “100/100” rating for BuzzFeed News by noting the five-year timespan since the dossier’s publication and the fact that the dossier article is one “single story.” 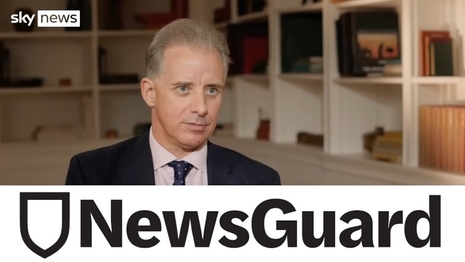 Members of the U.S. intelligence community and political enemies of former President Donald Trump used the discredited dossier compiled by former British spy Christopher Steele, and paid for by the Hillary Clinton campaign, to help build the case for the appointment of Special Counsel Robert Mueller.

The investigation cost $25.2 million, according to Fox Business, and paralyzed the country for two years. The Mueller probe also aggravated the political environment in the U.S. and across the world, dominating headlines while other, important news took a backseat.

Even liberal media have broadly rejected the accuracy of the dossier, and Special Counsel John Durham charged the primary source of the dossier with lying to the FBI in November.

Remarkably, NewsGuard affirmed BuzzFeed’s rating – which was written and edited by seven employees – in a recent email response to the MRC.

At the same time, the company’s own write-up on BuzzFeed News pays lip service to the site’s catastrophic failures in reporting on the Steele dossier and alleged Trump ties to the Kremlin.BuzzFeed published an “unverified dossier of opposition research on then-President Donald Trump,” NewsGuard notes in its “nutrition label” about the news organization. “Much of the information in the dossier, which influenced public discussion about special counsel Robert Mueller’s investigation into possible collusion between the Trump campaign and Russia, was unconfirmed. Several other news outlets had obtained it, but declined to publish it.”

MRC asked NewsGuard to explain its BuzzFeed rating, pointing out that the Steele dossier was the focal point of the media’s misreporting about Trump ties to Russia.

The dossier story “was published in January of 2017, more than five years ago and more than a year and a half before NewsGuard first launched our ratings and Nutrition Labels,” Skibinski said. “Moreover, no single story, even one that has recently been published, determines a site’s rating.”

But in November 2021, years after the publication of the dossier, even The Washington Post retracted prior reporting about the primary source of the document’s most salacious claims.

“Source D, according to the dossier, alleged that Russian intelligence had learned that Trump had hired Russian prostitutes to defile a Moscow hotel room once occupied by President Barack Obama and Michelle Obama and possessed a video recording of the incident,” The Post reported. “The allegation, which the dossier said was confirmed by a second person described only as ‘Source E,’ has never been substantiated.”

Further, the liberal Axios in November reported the discovery of the dossier’s falsity had spurred a “reckoning” among news organizations “for years-old coverage,” noting it still matters today. It’s “one of the most egregious journalistic errors in modern history, and the media's response to its own mistakes has so far been tepid,” Axios reported.

And the taxpayer-funded Voice of America, widely regarded as the global microphone of U.S. politics, in a December 2021 story reported that the media’s corrections “underscore… the need for transparency to maintain credibility and the audience’s trust.”

Still, though the dossier remains posted on the BuzzFeed News website without any correction or clarification, NewsGuard’s nutrition label says the outlet both “Regularly corrects or clarifies errors” and “Gathers and presents information responsibly.”

In addition to reporting on the Steele dossier as if it included credible allegations, BuzzFeed News falsely claimed in a Jan. 17, 2019, story that the Mueller team had detailed evidence that Trump directed his former attorney Michael Cohen to “lie to Congress” about a presumable project to build a Trump Tower in Moscow. BuzzFeed posted a subtle “update” three months later that Mueller’s final report found that Trump didn’t direct Cohen to lie.

Liberal outlet The Washington Post described that “single story” as the “highest-profile misstep at a time when press is under greatest scrutiny” in a January 2019 article.

NewsGuard’s erroneous ratings extend far beyond BuzzFeed News. A December MRC study revealed that NewsGuard rated liberal news outlets 27 points higher on average than news organizations on the right. Earlier this year, NewsGuard sent a lame rebuttal to MRC’s study. NewsGuard called it “fundamentally flawed” and claimed the MRC “cherry-picked” the news outlets it examined. But the study relied on a list provided by the independent, and Poynter Institute-endorsed, AllSides.

In his most recent email sent Feb. 17, Skibinski complained that MRC was wrong for calling out NewsGuard’s flawed scoring system. Then he abruptly pivoted to mention MRC’s NewsGuard rating, a topic that had nothing to do with the BuzzFeed News inquiry.

“We hope you will be more fair and accurate in your description of NewsGuard's ratings of the many conservative and conservative-leaning outlets that get perfect or high scores based on our criteria in this story than in previous stories, including noting that your own outlet, NewsBusters, continues to score a 92.5 out of 100 points,” Skibinski wrote.

A copy of NewsGuard's defense of its BuzzFeed News rating can be found here.