White House on Spotify Uproar: ‘There’s More that Can Be Done’ to Censor Joe Rogan 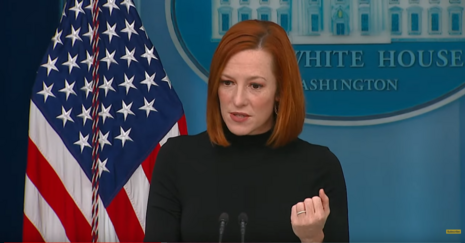 White House Press Secretary Jen Psaki called on music and podcast streaming platform Spotify to tighten its grip on speech to stop so-called “misinformation.” It’s a culture-war tactic often used by the left: Accept some subservience by others to its agenda, but say that’s only a start.

Psaki gave minor praise to Spotify for announcing it will add disclaimers on podcaster Joe Rogan’s podcasts, but said that is only a fraction of the censorship it should be doing. “So, this disclaimer — it’s a positive step.  But we want every platform to continue doing more to call out misinform- — mis- and disinformation while also uplifting accurate information,” Psaki said during Tuesday's press briefing.

“But, ultimately, you know, our view is it’s a — it’s a — it’s a good step, it’s a positive step, but there’s more that can be done.” A reporter at the briefing had asked Psaki about U.S. Surgeon General Vivek Murthy’s call for Spotify to remove Rogan’s world-famous Joe Rogan Experience podcast for so-called COVID-19 “misinformation.”

She commented further that the White House is urging a greater crackdown on controversial COVID-19 opinions across the board:

So our hope is that all major tech platforms — and all major news sources, for that matter — be responsible and be vigilant to ensure the American people have access to accurate information on something as significant as COVID-19. And that certainly includes Spotifly [sic].

She also recounted how Murthy declared misinformation itself a public health crisis: “You probably know, but the Surgeon General also took the unprecedented step to issue an advisory on the risk of misinformation and public health, which is a very significant step. And amid that, he talked about the role social media platforms have.”

Spotify made a minor concession to calls against alleged “misinformation” in Rogan’s podcast, but it clearly wasn't enough to appease those demanding outright censorship.

Spotify announced in a blog post that it is “working to add a content advisory to any podcast episode that includes a discussion about COVID-19.” It also reportedly claimed in an email to TechCrunch after singer Neil Young withdrew his music from the platform that it had already waged a war on free speech. “We have detailed content policies in place and we’ve removed over 20,000 podcast episodes related to COVID since the start of the pandemic,” Spotify said, according to TechCrunch.