On Tuesday night, the “big three” of ABC, CBS, and NBC continued heaping praise on the “historic” nuclear arms deal between the United States, its allies, and Iran with the negotiators being labeled “jubilant” as President Obama “chart[s] a new course” with Secretary of State John Kerry creating “a moment of history.”

Following the lead of Tuesday’s network morning newscasts, ABC’s World News Tonight anchor David Muir hailed the “historic deal with Iran” as representing “a major victory for President Obama” as he “vow[ed] to veto any efforts by Congress to derail the deal.”

Correspondent Terry Moran provided the basics of the deal from Austria and, like his coverage of the Supreme Court decisions concerning ObamaCare and gay marriage, Moran proudly gushed over the deal and those who made it happen.

Telling viewers to take a look at footage of “those jubilant negotiators in their moment of triumph,” Moran explained that the deal has been years in the making with the President “charting a new course” when he spoke to the nation earlier in the day. 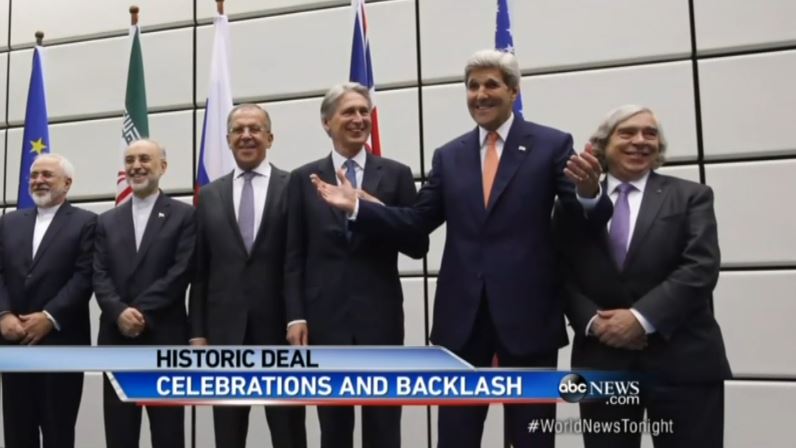 Eventually, Moran alluded to “critics” who “pounced on the deal” and how Israeli Prime Minister Benjamin Netanyahu was “[a]mong the first and fiercest” while Kerry “shot back in a spirited interview” with him.

Chief global affairs correspondent Martha Raddatz followed Moran with a short segment “from the very noisy streets of Iran” as “spontaneous celebrations” were “breaking out” in celebration of the deal. Before moving on, chief White House correspondent Jonathan Karl gaged reaction on Capitol Hill, but only briefly noted at the end how “there is a lot of Democratic concern” to go along with GOP doubts “about this agreement.”

On the CBS Evening News, anchor Scott Pelley wrapped up three reports and a brief on the deal by gushing over a picture from July 11 of Kerry “writing his closing argument to the Iranians” that he deemed “a moment of history”:

This is Secretary Kerry last Saturday, writing his closing argument to the Iranians. We're told that he wrote for hours on an old U.S. Senate legal pad. A person close to the negotiations tells us Kerry told the Iranians they could make the world safer and improve the lives of their own people, and he told Foreign Minister Zarif that he could be the one to end the crippling sanctions.

To her credit, State Department correspondent Margaret Brennan grilled Kerry in an interview conducted after the deal’s announcement. Brennan pressed Kerry on the point that “Iran can buy missiles and export them in eight years” as well as whether money and “access to weapons” will “empower Iran to destabilize the region rather than make it more secure.” 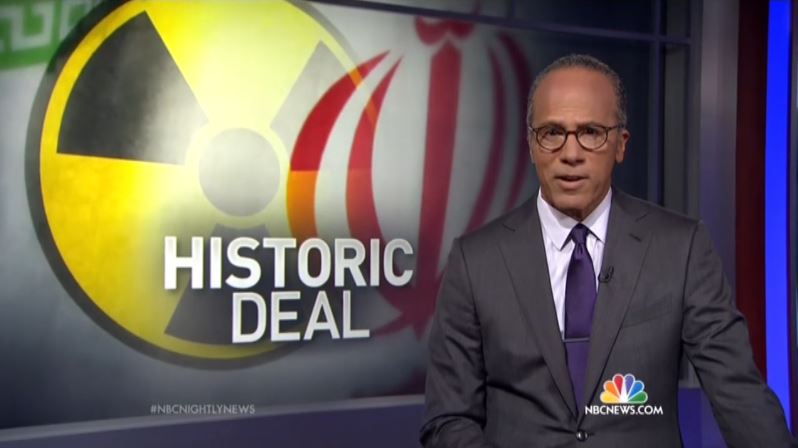 Over on NBC Nightly News, anchor Lester Holt also promoted the “historic deal” that will require the Obama administration to “convince nervous Mideast neighbors and the American Congress that there is no better alternative.”

Filing from Vienna, chief foreign affairs correspondent and MSNBC host Andrea Mitchell admitted that the U.S. and Iran “are now entering uncharted territory” following “years and decades in fact of calling each another great Satan and the ‘axis of evil’” (in a shot to former President George W. Bush).

After a report from chief foreign correspondent Richard Engel in Tel Aviv with reaction across Israel and the Middle East, Holt brought in Meet the Press moderator Chuck Todd and asked him to explain “how deep is the opposition in Congress to this deal.” Holt went on to ask Todd about the Iran deal being “a legacy item for the President” and the two agreed that time will tell whether or not the deal was worthwhile.

When the initial framework of a deal was announced on April 2, ABC’s World News Tonight and NBC Nightly News similarly cheered the development as “historic” and a sign that “the United States could be entering a new era in its relationship” with the leading terrorism sponsor in Iran.