English-language networks ABC, CBS, and NBC and Spanish networks MundoFox, Telemundo, and Univision covered the news on Thursday night that independent Senator Bernie Sanders (Vt.) will seek the Democratic nomination for president in 2016, but only NBC Nightly News chose to label him a “socialist” after ABC and CBS had previously done so on Thursday morning.

While correspondent and MSNBC host Andrea Mitchell characterized Sanders as a “socialist,” Mitchell offered some fawning words for him when she declared that he was “not your typical blow-dried politician.”

Prior to Mitchell, interim anchor Lester Holt noted that the entrance of Sanders serves as one of the “new obstacles” that’s been placed before fellow Democratic candidate Hillary Clinton as he will be “coming at her from the left.”

In between soundbites from Sanders, Mitchell gushed that “[h]e’s no your typical blow tried politician” since he was “[a] one time socialist mayor of Burlington, Vermont” and will be “challenging Clinton over her fundraising and possible conflicts of interest.”

Following a few moments that were devoted to how Clinton was working to distance herself from some policies held by the Bill Clinton administration, Mitchell returned to Sanders by stating that he has “his own fan base” and then played a clip of Democratic Senator Al Franken (Minn.) imitating Sanders.

If Mitchell was looking to imply that Franken was supporting Sanders, she would be mistaken as Franken endorsed Hillary Clinton during an interview with MSNBC colleague Ari Melber on December 15, 2014.

ABC’s World News Tonight also mentioned Clinton in its coverage of Sanders, but instead made the announcement from the Vermont Senator the focus of a 19-second news brief from anchor David Muir:

Now, to the race for 2016, and a new contender tonight. Vermont Senator Bernie Sanders, an independent, saying he's running for the Democratic nomination, vowing to press Hillary Clinton over climate change, campaign finance reform and income inequality in the middle class. Clinton saying she agrees the “focus must be on the middle class,” welcoming him to the race tonight.

Over on the CBS Evening News with Scott Pelley, only a brief reference was made to Sanders at the conclusion of segment by congressional correspondent Nancy Cordes on the Clinton Foundation scandal: “Vermont Senator Bernie Sanders, who just got into the presidential race today and is Clinton's first Democratic challenger, well, he said he thinks the donations are a fair campaign issue.”

In contrast to the coverage Sanders has received thus far, the networks were far less warm toward any of the three declared Republican candidates. When Florida Senator Marco Rubio announced on April 13, the network evening newscasts hit Rubio for lacking the “experience,” “fame,” and “fortune” of Hillary Clinton and possible GOP candidate Jeb Bush.

Turning to Kentucky Senator Rand Paul, CBS and NBC declined to label Paul as “conservative” on the evening of April 7 while they viciously attacked Texas Senator Ted Cruz on March 23 for having conservative policy positions and the possibility of facing “some tough sledding” with “mainstream Republicans.”

The relevant portions of the transcript from April 30's NBC Nightly News are transcribed below. 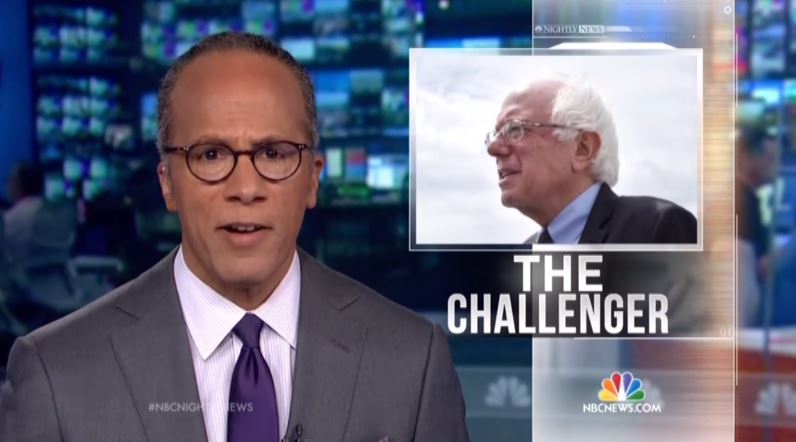 LESTER HOLT: Hillary Clinton is facing new obstacles tonight on multiple fronts. Her first official challenger for the Democratic nomination? Independent Bernie Sanders of Vermont running for president as a Democrat and coming at her from the left. This as Clinton is working overtime to separate herself from some of the policies her husband put in place. NBC's Andrea Mitchell is on the trail.

ANDREA MITCHELL: Hillary Clinton arriving for her third Washington fundraiser of the day on her way to what is expected to be a billion and a half dollar campaign. Even as she got her first official rival, independent Vermont Senator Bernie Sanders.

INDEPENDENT SENATOR BERNIE SANDERS: We're in this race to win.

MITCHELL: He's not your typical blow dried politician. A one time socialist mayor of Burlington, Vermont, challenging Clinton over her fundraising and possible conflicts of interest.

SANDERS: We now have a political situation where billionaires are literally able to buy elections and candidates. Let’s not kid ourselves.

MITCHELL: As she moves left, Clinton hopes to blunt support for Senator Elizabeth Warren, not a candidate but a constant critic. As for Bernie Sanders, he's got his own fan base.

DEMOCRATIC SENATOR AL FRANKEN [Minn.][in Bernie Sanders-like voice]: When I experienced is what it’s like in many European countries. How much does it cost to go to college in Scandinavia? And the guy said [IN SCANDINAVIAN VOICE]: Well, in Scandinavia, they pay you to go to college. [LAUGHTER AND APPLAUSE]

The transcript of the brief that aired on ABC’s World News Tonight with David Muir on April 30 can be found below. 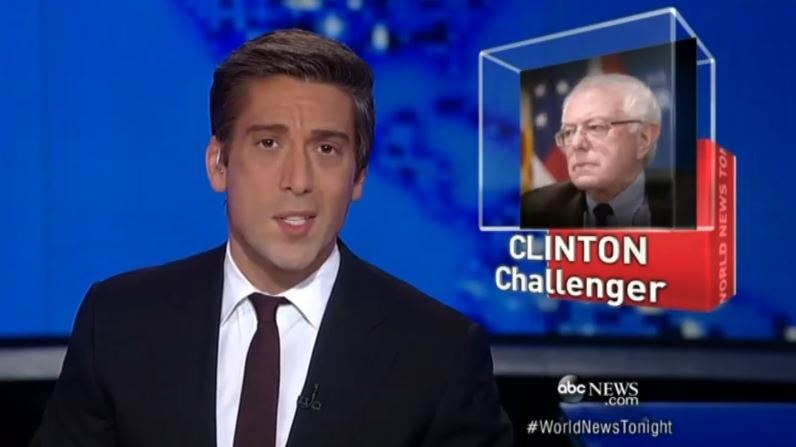 DAVID MUIR: Now, to the race for 2016, and a new contender tonight. Vermont Senator Bernie Sanders , an independent, saying he's running for the Democratic nomination, vowing to press Hillary Clinton over climate change, campaign finance reform and income inequality in the middle class. Clinton saying she agrees the “focus must be on the middle class,” welcoming him to the race tonight.