ABC’s Cecilia Vega Gushes: Hillary Working to Win Voters ‘One Handshake, One Chai at a Time’

ABC News’s senior national correspondent Cecilia Vega continued her cheerleading for Democratic presidential candidate Hillary Clinton on Tuesday’s World News Tonight as she gushed that Clinton is working to win over voters “one handshake, one chai at a time” (in reference to her order of a chai tea at an Iowa coffee shop).

Program anchor David Muir started the Clinton segment by again touting the “surveillance image” of “the candidate grabbing a bite at Chipotle” with today’s “image” being “from a coffee shop.” Muir remarked that Clinton’s strategy appeared “much different” from the “big crowds and landing in choppers” during her 2008 campaign.

Starting things off from Monticello, Iowa, Vega declared that the town of 3,800 people spent Tuesday “hosting one of the biggest names in American politics” with Clinton’s stop at a local community college for a roundtable discussion with seven students.

Vega dubbed the 2016 candidate “Hillary Clinton 2.0” who wants “[a] focus on what she calls everyday Americans” and will seek out voters in venues ranging “from colleges to coffee shops.” After a soundbite of the former First Lady placing an order for water plus chai and carmelo teas at a coffee shop, the Clinton correspondent told viewers that Clinton is working to gain voters “[o]ne handshake, one chai at a time.”

NBC Nightly News interim anchor Lester Holt led into correspondent Andrea Mitchell’s report from Iowa by noting that, in reference to the scrum of reporters chasing Clinton’s van, “the media frenzy is in full effect.” Mitchell also commented on the sad display, saying near the top of her report: “After two days of occasional sightings on road to Iowa, when Hillary Clinton finally arrived for her first public event, it set off a stampede of photographers and reporters.”

Later, the NBC News reporter and MSNBC host touted fellow correspondent Kristen Welker’s eight-second interview with Clinton from Tuesday as well as her own shouting at Clinton to ask “what did you learn today.”

Before turning the show back over to Holt, Mitchell mentioned that: “As Clinton is voters to give her another chance, aides say that they will give detailed policy proposals in the coming weeks, but it’s clear they would like this campaign to be all about the economy.”

On CBS, correspondent Nancy Cordes covered the events in Iowa and, once again, continued the network’s blackout of ignoring Clinton’s scandals (that now dates back to before Clinton’s official announcement).

Offered no criticism of Clinton’s campaign, she reported that “Clinton did explain in the greatest detail yet, why she is running again” and outlined “what she called the four big fights she would take on as president.”

After mentioning her final point about the need to root out the influence of money in politics, Cordes surprisingly took a subtle dig at Clinton’s hypocrisy: “This, Scott, from someone who is expected to raise a record $2 billion for her presidential campaign.”

The relevant portions of the segment from ABC’s World News Tonight with David Muir on April 14 are transcribed below. 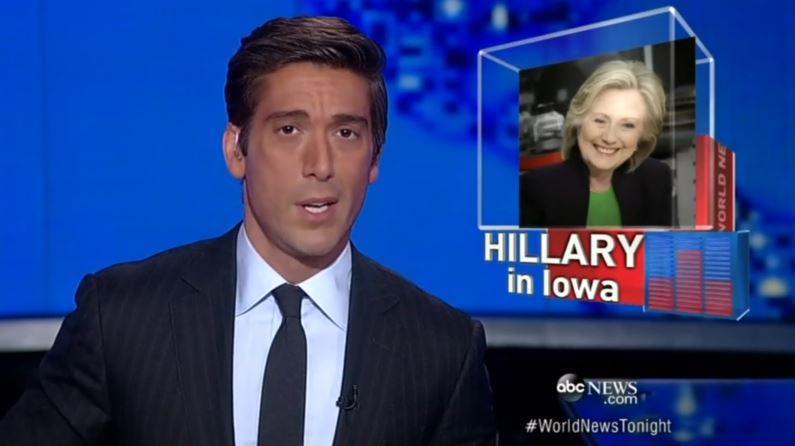 DAVID MUIR: We turn now to the race for 2016, the president, Hillary Clinton vying for the White House and that strategic trip to Iowa.

Last night, this surveillance image, the candidate grabbing a bite at Chipotle. Well today, it was this image from a coffee shop. Eight years ago, if you remember, it was big crowds and landing in choppers in Iowa. This time, much different. ABC’s Cecil Vega in Iowa.

CLINTON SUPPORTERS [ON THE SIDE OF THE ROAD]: Go Hillary!

VEGA: This is Hillary Clinton 2.0. While eight years ago, she choppered around Iowa and held her first rally before a crowd of 1,500.

CLINTON: I am running to be the champion for Americans and their families, so that we can not just worry about treading water, but you can get ahead and stay ahead.

VEGA: A case she'll make from colleges to coffee shops. 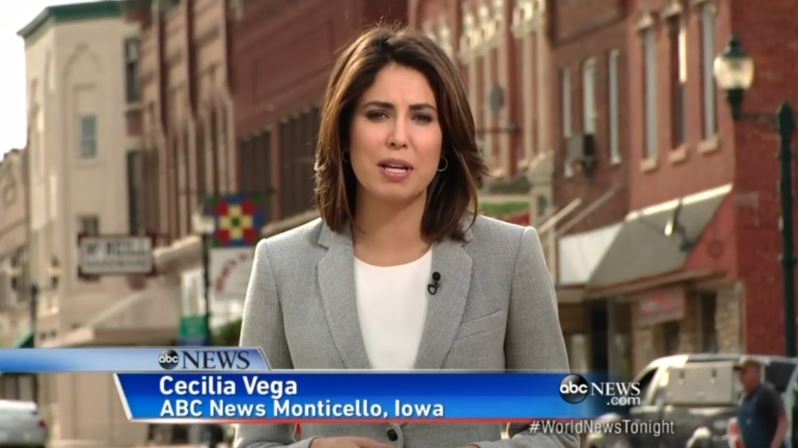 CLINTON [to coffee shop clerk]: I'll try both your chai and your carmelo and maybe a glass of water, too?

VEGA: One handshake, one chai at a time. Of course, Clinton doesn't have a Democratic challenger right now, but a top aide tells me tonight that they fully expect a challenger to jump into this race here in Iowa.