Continuing the standard set by NBC’s Today, on Wednesday night the major broadcast networks played up the fears that “health care coverage for millions” might be lost and “could doom ObamaCare” if the U.S. Supreme Court, in a case heard on Wednesday, rules against the federal government and its federal subsidies.

ABC and NBC used covert liberal activists, with ABC turning to an ABC News contributor who served as an Assistant Counsel to President Obama and NBC interviewing a man who had joined an amicus curaie brief in support of ObamaCare at the appellate level.

Starting with NBC Nightly News’s coverage, interim anchor Lester Holt declared near the top of the show: “Death spiral, that's what could happen to ObamaCare. Tonight, a warning at the Supreme Court with health care coverage for millions hanging in the balance.”

Just prior to Justice correspondent Pete Williams’s report, Holt summarized the scene as “high drama at the Supreme Court” facing “[a] legal challenge that could doom ObamaCare as we know it” that was argued before the justices.

When it became Williams’s turn, he asked viewers “what’s at stake” and then pointed to “David Tedrow, whose non-alcohol liver disease left him bedridden forced to sell his business.”

Continuing to tout Tedrow’s case, Williams promoted how “[w]hat saved him, he says, was the launch of ObamaCare and the federal subsidy that came with it allowing him to afford insurance and get a liver transplant.”

What Williams failed to mention was Tedrow’s direct role in publically advocating for ObamaCare to be upheld. On November 8, 2014, The Washington Post published a column by Tedrow describing his serious health condition and how he views his ability to keep “the subsidy” as “the difference between life and death.”

Further, Williams did not highlight how Tedrow originally lost his private insurance because of ObamaCare and that he filed in support of the Obama administration as one of the parties when the case before the U.S. Court of Appeals (and covered by the liberal blog Think Progress).

The pro-ObamaCare angle and usage of a covert liberal was also employed on ABC’s World News Tonight. Anchor David Muir pondered whether ObamaCare will “survive” this “fiery battle” with the focus on “those tax credits given to millions of Americans to help them afford health car premiums.”

After that, ABC News senior national correspondent Jim Avila immediately began spinning for the White House: “It's an effort to kill ObamaCare, leaving 7.5 million Americans without health insurance. A lawsuit brought by four people who didn't want to be forced to buy it.”

Turns out, Shaw has quite a liberal background of her own. A law professor at the Cardozo School of Law, Shaw worked previously as Special Assistant and Associate Counsel for President Obama and is married to liberal MSNBC host Chris Hayes.

Over on the CBS Evening News, fill-in anchor Charlie Rose ended a tease by wondering: “Will millions lose their insurance?” When legal correspondent Jan Crawford started her report, she determined that: “Early in the argument, Justice Sonia Sotomayor outlined the stakes. Without federal assistance, most Americans would lose their new insurance. “We're going to have the death spiral,” said Sotomayor, “[t]hat unravels the entire system.”

The relevant portions of the transcript from the segment on March 4's NBC Nightly News are transcribed below. 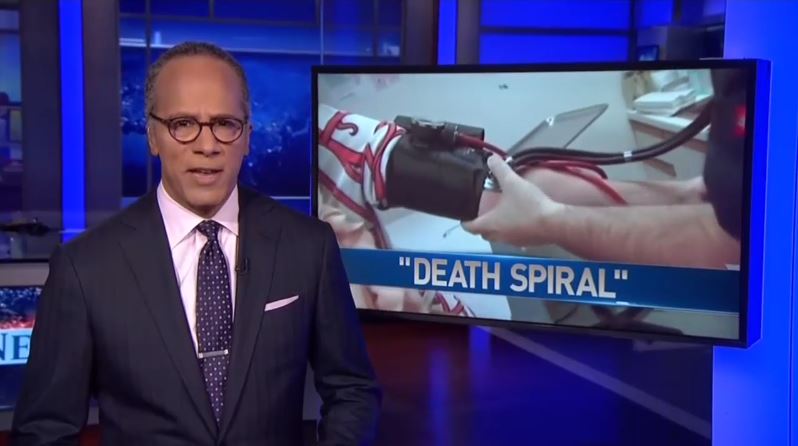 LESTER HOLT: Death spiral, that's what could happen to ObamaCare. Tonight, a warning at the Supreme Court with health care coverage for millions hanging in the balance.

HOLT: High drama at Supreme Court today. A lot of eyes on this one. A legal challenge that could doom ObamaCare as we know it. Health care coverage for millions of Americans is hanging in the balance and as our Justice correspondent Pete Williams reports, the law's future could hinge on just four words.

TEDROW: My liver was ceasing to function and I was dying.

WILLIAMS: What saved him, he says, was the launch of ObamaCare and the federal subsidy that came with it allowing him to afford insurance and get a liver transplant. 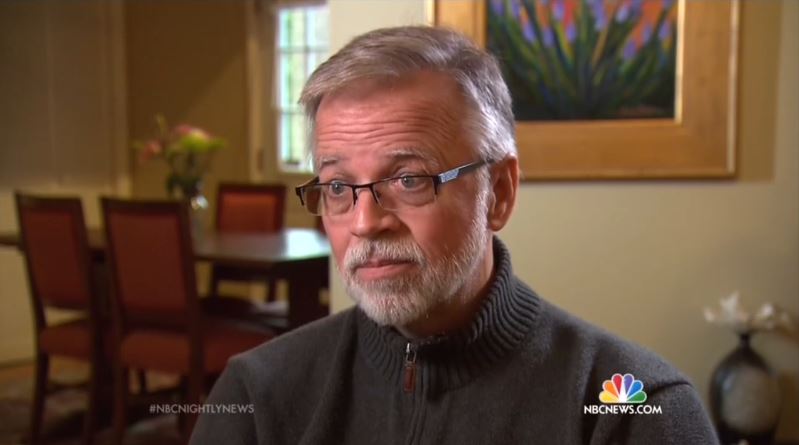 WILLIAMS: He's one of the 7 million Americans who get their insurance and the subsidy through healthcare.gov, the federal marketplace or exchange. Their average premium, about $100 a month, would be nearly four times that without the subsidy. Too much for many to afford. The question today for the Supreme Court: Whose entitled to that subsidy? Only 16 states now have their own insurance exchanges up and running and ObamaCare opponents say the law's own words mean the subsidies are only for insurance bought on “an exchange established by the state” and not, they say, on the federal exchange.

A full transcript from the segment that aired on ABC’s World News Tonight with David Muir on March 4 can be found below. 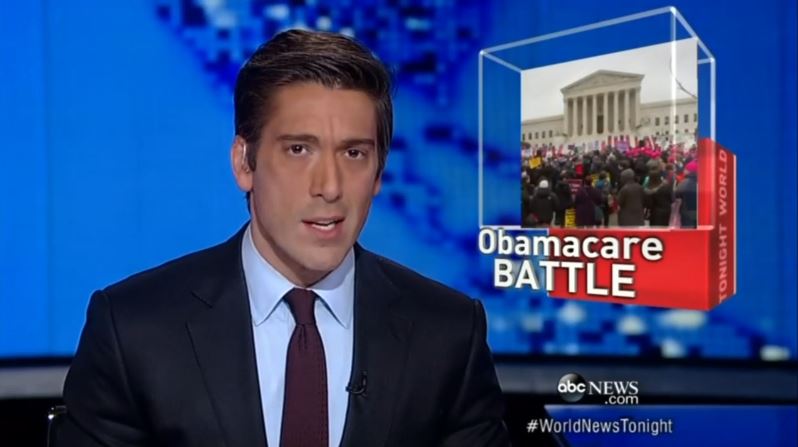 DAVID MUIR: From the White House, to the Supreme Court tonight. Will ObamaCare survive? The fiery battle over the President's health care law. Debating those tax credits given to millions of Americans to help them afford health care premiums. Tonight, one of the justices giving a bit of a hint about which way the case might go. ABC's senior national correspondent Jim Avila.

JIM AVILA: It's an effort to kill ObamaCare, leaving 7.5 million Americans without health insurance. A lawsuit brought by four people who didn't want to be forced to buy it, and designed by a conservative think tank. All based on four words buried in the 900-page law “established by the state.” The Affordable Care Act's marketplaces were designed to be administered by state governments, but only 16 signed on to do so. That's when the federal government stepped in, making insurance available and paying subsidies nationwide. Today, the plaintiffs before the Supreme Court arguing that is illegal, because of those four words, “established by the state.” But the Obama administration argues that's just a technicality. [TO ABC NEWS CONTRIBUTOR KATE SHAW] This is one of those cases where the effect could be dramatic, right?

ABC NEWS CONTRIBUTOR KATE SHAW: It could be dramatic and it could be immediate.

AVILA: Impossible and unwise to predict how the justices will rule, but one hint from a critical swing vote today. Anthony Kennedy, who told the plaintiff attorney ruling in their favor would send the entire ObamaCare program into a death spiral.