Major broadcast networks CBS and NBC failed to cover the news that police in Missouri are looking into inflammatory comments made by Michael Brown’s stepfather in the aftermath of a grand jury’s announcement on November 24 that Ferguson police officer Darren Wilson will not be charged in connection to Brown’s death.

Following the announcement of the decision, Louis Head stood surrounded by his wife and mother of Michael Brown and shouted multiple times at the large crowd gathered nearby to “burn this bitch down,” which was most likely in reference to the town of Ferguson. Later that night, widespread looting, vandalism, and burning of businesses and police cruisers all took place throughout the area. [MP3 audio here; Video below]

ABC’s World News Tonight with David Muir was the lone network newscast that did report on this new development with a one-minute-and-34-second segment by ABC’s Steve Osunsami.

Osunami reported that there was “word that police investigating the fires that burned across the city might also be looking at what Brown's stepfather said that night, whether his words helped start a riot and set the city on fire.”

The story played Head’s comments on two occasions, but bleeped him out when he uttered the curse word and put on-screen a graphic as he spoke that said “burn it down” instead.

While Osunsami stated that Ferguson police “are softening their tone” since their original statements that they were looking into what Head said “as part of the entire investigation that includes the arsons, loofting, destruction of property, etc,” they maintained that “they would still like to talk with the stepfather.”

The CBS Evening News with Scott Pelley had a news brief on the continued protests related to the events in Ferguson and mentioned one in particular at a school in nearby Florissant, Missouri before moving on to a report discussing the topic of police officers wearing body cameras while on the job.

Over on NBC Nightly News, that program offered no coverage on the topic of Ferguson during its broadcast.

The complete transcript of the news brief that aired on ABC’s World News Tonight with David Muir on December 2 is transcribed below. 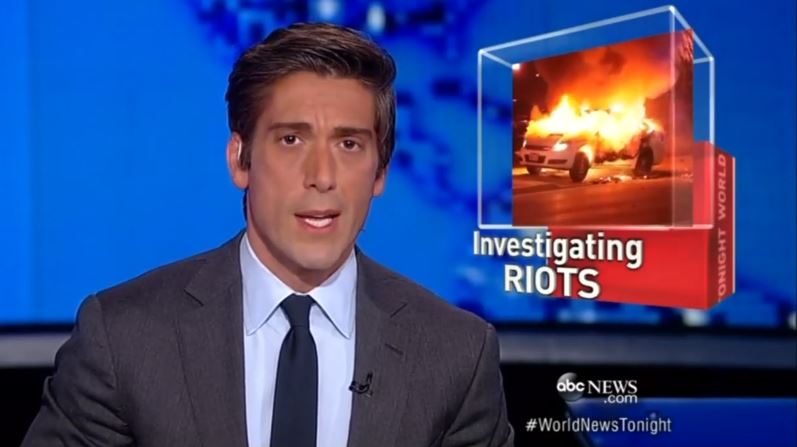 DAVID MUIR: Now, to Ferguson, Missouri, tonight, and there's new fallout after the grand jury decided not to hand out an indictment for the police shooting of Michael Brown. We all saw the violence that followed and, this evening, a new question: Is Michael Brown's stepfather now being investigated for what he said afterward? ABC's Steve Osunsami back on the story for us.

STEVE OSUNSAMI: They were words in the heat of the moment as crowds gathered on the streets of Ferguson.

Louis Head, the stepfather of Michael Brown, clearly upset, as the family was learning that officer Darren Wilson would not be charged for the shooting death of their son.

HEAD: Burn this bitch down!

OSUNSAMI: And now today, word that police investigating the fires that burned across the city might also be looking at what Brown's stepfather said that night, whether his words helped start a riot and set the city on fire. From St. Louis County Police tonight, “Our department is currently looking into this as part of the entire investigation that includes the arsons, loofting, destruction of property, etc.” Speaking on Fox News, Ferguson's Police Chief Tom Jackson said they're well aware of the video tape.

FERGUSON POLICE CHIEF TOM JACKSON: We are pursuing those comments and there's a lot of discussion going on about that right now, but I really can't get into that at this time.

OSUNSAMI: The family's lawyers have tried to explain. They were upset. The emotions were raw and their son is still dead. 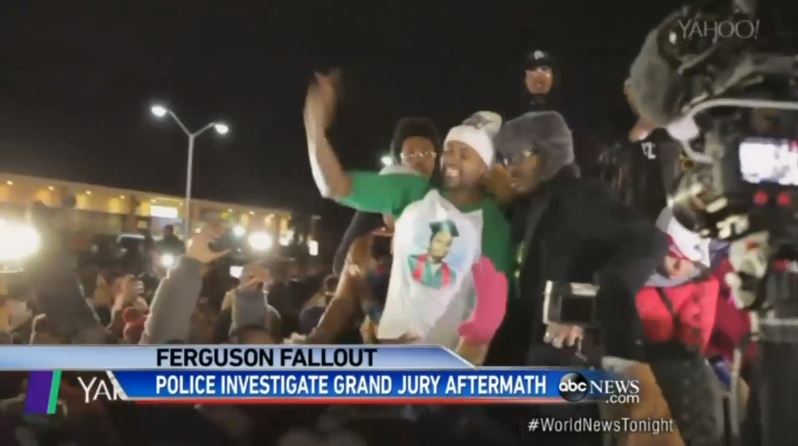 BROWN FAMILY ATTORNEY BENJAMIN CRUMP: Raw emotion. Not appropriate at all. God forbid your child is killed the way they killed.

OSUNSAMI: Tonight, police are softening their tone, telling us they are looking into a lot of things that happened that night, but they would still like to talk with the stepfather. Steve Osunsami, ABC News, Atlanta.