As of Monday night, the major English and Spanish broadcast networks have blacked out all mention of remarks made by Hillary Clinton on Friday at a campaign event for Massachusetts Democratic gubernatorial candidate Martha Coakley that businesses and corporations do not create jobs.

Speaking at the campaign event, Clinton told the audience that: “Don't let anybody tell you that, you know – it's corporations and businesses that create jobs. You know, that old theory, trickle down economics. That has been tried, that has failed.” [MP3 audio here; Video below]

Since then, English-language networks ABC, CBS, and NBC and Spanish-language networks Telemundo and Univision have ignored this story in both their morning and evening newscasts in a complete reversal of what would be the case if something off putting were made by a Republican figure or future presidential hopeful.

After supporters spent the weekend attempting to explain what Clinton had said, Clinton walked back her remarks during a campaign event in New York on Monday by channeling some standard Democratic Party rhetoric that one hears in stump speeches:

Let me be absolutely clear about what I've been saying for a couple of decades: Our economy grows when businesses and entrepreneurs create good-paying jobs here in an America where workers and families are empowered to build from the bottom up and the middle out -- not when we hand out tax breaks for corporations that outsource jobs or stash their profits overseas.

Nevertheless, Clinton’s original remarks and so-called walk back have received no on air coverage from the networks. With the 2014 midterms a week away from Tuesday and media coverage on Monday of Jeb Bush’s possible 2016 presidential run, coverage of Clinton's anti-business statements remains to be seen.

The full transcript of the segment that aired on FNC’s Special Report with Bret Baier on October 27 can be found below. 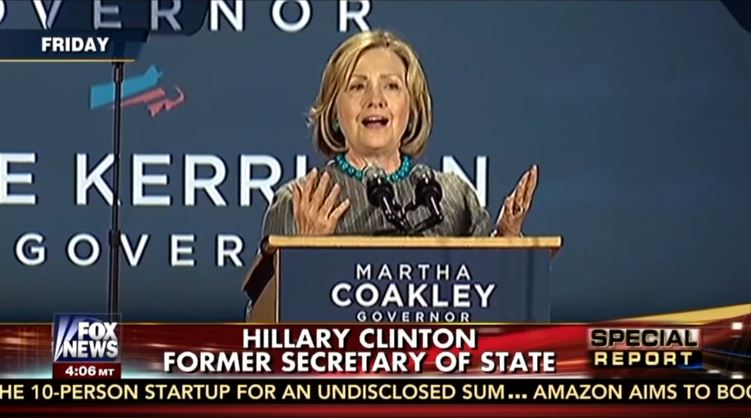 BRET BAIER: Hillary Clinton created quite a fervor over the weekend, saying that corporations and businesses do not create jobs.

HILLARY CLINTON: Don't let anybody tell you that, you know – it's corporations and businesses that create jobs. You know, that old theory, trickle down economics. That has been tried, that has failed.

Nowhere did she contradict the statement that businesses don’t create jobs and there is nothing in the full context of her remarks to indicate she did not mean to say exactly that. Her defenders have rushed to the rescue, however, with one New York Times reporter claiming there was nothing new in her statement and that the context makes it crystal clear she was just criticizing outdated Republican tax policies. Another defender, a poet from Vermont, said on Twitter that the assertion was correct that businesses don’t create jobs. What happened she says is that, quote, jobs open up and people rush to fill them, end quote. Well, okay then. An unnamed Clinton aide did a little better, telling the politics journal Politico that Mrs. Clinton had meant to say that tax breaks for businesses don't create jobs. Well, if you don't believe that businesses create jobs in the first place, you're bound to believe that giving them tax breaks won’t either, but let’s give her the benefit of the doubt and assume she said what she didn’t mean and didn’t apparently realize what she said. It does make you wonder if the people who consider her an unbeatable candidate have overestimated her. Bret.

BAIER: And Brit, some kind of clarification today? 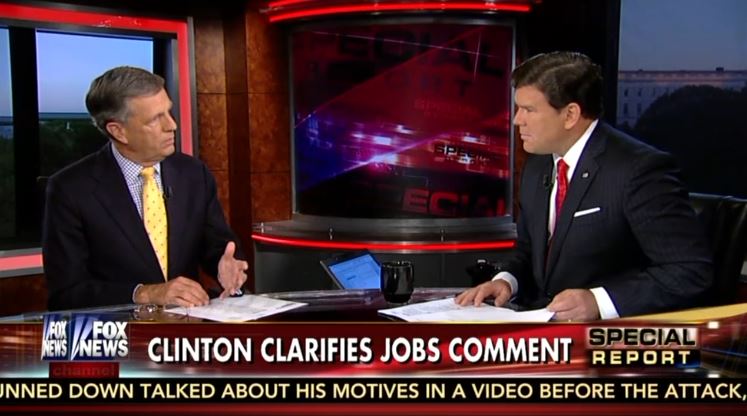 HUME: Yeah, at another campaign event. She was at a campaign event when she made the first comment the other day. At a campaign event today, she said she had short-handed her comments and she went on to acknowledge that indeed businesses do create jobs and then she went from that to a sort of standard, Democratic Party attack on what’s called trickle down economics. Trickle down economics is an epithet that Democrats and liberals have applied to Reagan-era tax policies claiming they don't create jobs at all. So we're left to wonder whether this was a gaffe or whether down deep she may actually believe that. I guess we'll have to wait and see.

BAIER: And the defenders have been fierce.

HUME: Oh yes. As they always have indeed.