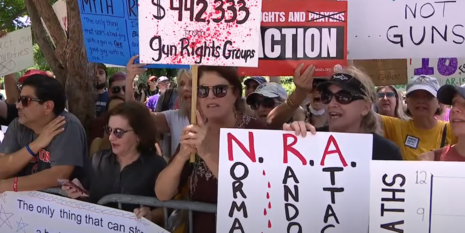 In the worst 1619 Kool-Aid style, Hedges claimed: “The Second Amendment was designed to solidify the rights of white men to carry weapons, which were used to exterminate the indigenous population, hunt down enslaved people who escaped and crush uprisings.”

It doesn’t take a constitutional scholar to realize that this was a blatant projection of his existing post-modern Neo-Marxist worldview onto the issue of guns. He viewed things exclusively through the dichotomy of white vs. black, “oppressor” vs. “oppressed” as a modern adaptation of the Marxist worldview.

The Second Amendment was designed to give the people a defense against a tyrannical government, and secure a free society from people like Hedges.

The right to bear arms is for every good American citizen. He laments that most felons aren’t allowed to own guns and calls it a calculated tactic “barring legal gun ownership from a third of black men.” So, never mind the race-baiting;  felons should have guns but not law-abiding citizens?

He went on to say that “the gun enforced white supremacy” and that LGBT, Black, Asian, Muslim, and Jewish people will be “slated for execution” along with the undocumented, liberals, feminists, and intellectuals. Truly, the words of a well-adjusted man. No surprise, then, that he is a self-described socialist and anarchist.

Hedges’ article is a prime example of what happens when a man becomes so infatuated with his own ideas that he can no longer conceive of the world in any other way. The projection of his preconceived conclusions onto this issue is easy to see. Every citation and argument he makes is posthoc rationalization. He already hates white people. He already hates the second amendment. He’s been given an opportunity to hate on both, and he took it.