In Fairfax County, Virginia, Commonwealth’s Attorney Steve Descano recently committed to NOT do his job. 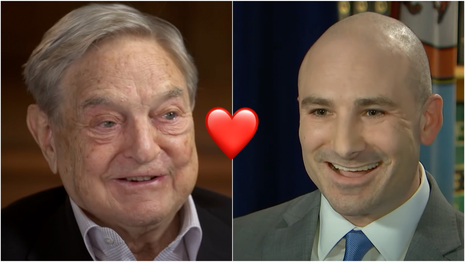 On May 31, Descano penned a guest essay for The New York Times in which he said he would “never prosecute a woman” for aborting her child, even if abortion becomes illegal in the Old Dominion. Descano admitted that even though his job is to hold people accountable to the law, when it comes to violating abortion laws, he will turn a blind eye.

Descano notoriously touts left-wing ideology both on social media and in his job as a prosecutor. And, unironically, he received more than $600,000 from liberal billionaire George Soros.

After looking at Descano’s recent history, his ties to Soros make more and more sense.

Though Descano is a product of Catholic schools and used to attend a Methodist precinct, it appears that his Christian values have drifted, considering his abortion advocacy. In 2021, Descano signed a petition to keep Roe instated and help block the Texas “heartbeat bill,” the same bill that reportedly saves an estimated 100babies a day.

Though Descano doesn’t care about babies in the womb, he does care about protecting kids in schools - but touts all the wrong ways of making that happen. He's an advocate for extreme gun control, once called those who “cower” to the National Rifle Association “dopes," and opposes Virginia Republican Governor Glenn Youngkin’s plans for securing civilian safety.

“We need to get rid of assault rifles…The problem is the guns,” Descano claimed earlier this week.

Descano also supports the voluntary castration of minors, is “sickened” by attorney generals who rightfully deem gender-affirming procedures to be “child abuse," and also gave a “leinent” punishment to convicted sexual assaulter and child predator.

To make things worse, Descano does not favor the police nor anyone who actually tries to enforce laws. In a 2021 recording, Descano bragged about having to “spike officers to the ground.” He placed Fairfax Sheriff's officials on their “Brady list” after a public spat at a courthouse security checkpoint, according to Fox 5. It’s ironic that someone who is tasked with implementing the law seems to hate the people that enforce it.

For some rapid-fire facts, Descano thinks Donald Trump and Ted Cruz are “rich rags,” he is a big fan of Kentaji Brown Jackson (who doesn’t know what a woman is), and even decided to “stop charging adults with simple possession of marijuana” when at the time it was illegal in Virginia.

In sum, Descano is the Commonwealth Attorney whose job is to enforce the laws that the legislature created. Politics isn’t part of his job, but it's apparent in nearly every decision he makes - decisions that shed light on George Soros’ leftist bankrolling regime.