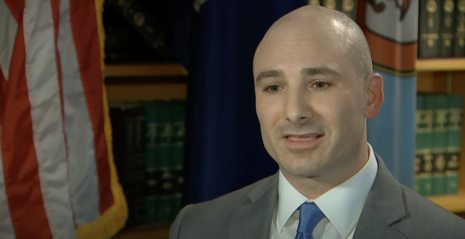 Nearly two years ago Steve Descano took an oath of office as a Virginia prosecutor to “protect my community from those who broke the law.” Virginia is likely to criminalize abortion following the overturn of Roe V. Wade but Descano, who represents Fairfax County, Va., claimed that he would “never prosecute a woman” for aborting her child, according to The New York Times.

Republican Virginia Gov. Glenn Youngkin is reportedly “‘staunchly, unabashedly’ against abortion.” If Youngkin decides to criminalize abortion following the potential overturning of Roe V. Wade, Descano has no plans to actually do his job and prosecute people who break the law.

In a guest essay for The Times, Descano shared his commitment to allowing women to disobey the law.

So when the court’s draft decision overturning Roe v. Wade was leaked earlier this month, I committed to never prosecute a woman for making her own health care decisions. That means that no matter what the law in Virginia says, I will not prosecute a woman for having an abortion, or for being suspected of inducing one.

Damn. Since when did it become okay to bend the law to fit what we want? Law is law. Period.

It's no surprise Descano has a radical agenda. When he was fighting for his role, left-wing extremist and billionaire George Soros donated $392,000 to Descano's campaign.

Descano deemed it “heartbreaking” when women don’t have the “right” to abort their children.

"Every day, we decide where to deploy our limited resources, making judgment calls about which cases are consistent with the values and priorities of the communities we represent, which plea deals to pursue and which crimes merit our attention. When it comes to charging individuals, we are the arbiters of the law."

Like most of the left, Descano claimed that banning the murder of babies is an “Orwellian infringement” and prosecuting women for having an abortion is an “intrusion” on their personal lives. What about the intrusion that happens on a child when his/her life is ended during an abortion?

This isn’t the first time Descano decided to disobey the law. A few years ago he decided to “stop charging adults with simple possession of marijuana” when at the time it was illegal in Virginia.

When did it become OK for prosecutors to decide to NOT prosecute based on their own preference? Sorry but, that's just not how the law works.

Descano seems to only be the arbiter of the laws that he agrees with. He fully commits himself to not being a “hard-line” prosecutor. Seems like he’s got commitment issues to the thing he literally took an oath to stand by - the L A W.