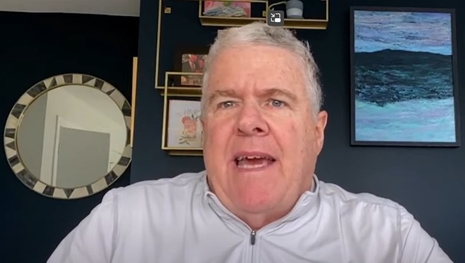 Football writer Peter King veered far out of his lane Monday, using his sports column to preach for gun control. He also called this country the “United States of Guns.” In his column Football Morning in America, he demanded more gun laws and called for a ban on the sales of AR-15 rifles.

King said he “will also remember the 32 people murdered over the last 16 days in our country, in Buffalo at a supermarket, in a church in Laguna Woods, Calif., and in an elementary school in Uvalde, Texas.” He ignored the 52 people who were shot in Chicago’s weekend bloodbath.

King also wonders why America’s lawmakers are not open-minded enough to solve the “cancerous” problem of gun violence, which in his closed-minded view, only entails gun control. He put Texas Governor Greg Abbott (R) in the crosshairs of his column.:

Why is it such a non-starter for a powerful person like Gov. Greg Abbott of Texas to say, ‘We have had too many events like this one in Uvalde, too many events when 19 children and two teachers were murdered in what’s supposed to be a safe space. The Second Amendment protects the right of Americans to bear arms, but we have to ask whether teenagers, like the one in Uvalde who bought a semi-automatic assault-style rifle days after turning 18, should be able to buy deadly weapons. We have to ask whether the right to buy assault-style rifles for 18-year-olds supersedes the rights of 10-year-old boys and girls to be educated in peace. Everything needs to be on the table now.

King asked why the governor of Texas can’t govern all of his citizens, including those shot and killed by the mass murderer in Uvalde. “Our country is sick.” Congressmen won’t consider changing “a law with tentacles that our forefathers could never, ever have imagined.” President James Madison, the architect of the Second Amendment, would not accept 18-year-olds with “killing machines that have no valid use for civilians other than fast and mass murder.”

King dismissed mental illness and the phrase “guns don’t kill people … We are the United States of Guns.”

Aside from King’s potshots, the Buffalo and Uvalde killers passed background checks. Gun grabbers also avoid an inconvenient truth about the lengthy list of gun laws broken by Columbine killers Dylan Klebold and Eric Harris in 1999. Gun control is merely an attempt to deny law-abiding citizens the right to defend themselves. Deranged people still kill despite gun laws.

King admits that many people think a football column is not the place for diatribes about gun control. He says it’s time for him to stand up and be counted. He also praised Golden State coach Steve Kerr, baseball coach Gabe Kapler, the Yankees and Rays for pushing gun control.

It’s time for King to sit down now. It’s time for him and other sports figures and teams to stop the failed argument for gun control and focus on the issues of mental health and inadequate safety precautions. A gun is no better, no worse than the person handling it. It’s time to point blame at the killing fields in Chicago, Detroit and other large, dangerous cities.