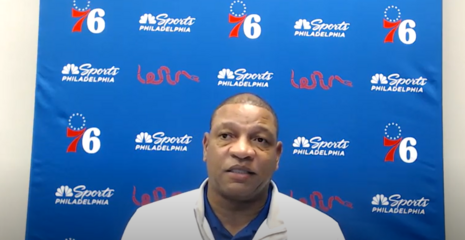 Cancel culture is not the loss of a Major League Baseball all-star game. It’s the erasing of Black lives, says USA Today race and inequality writer Mike Freeman. In the same story, and in the aftermath of Sunday’s police killing of Daunte Wright in Minneapolis, NBA coach Doc Rivers said Germany cleaned up its racism, but the U.S. has yet to do the same.

Rivers, the coach of the NBA’s Philadelphia 76ers (seen in photo), said Monday, “You keep hearing this cancel culture stuff, but we’re canceling Black lives.” Rivers made a sick analogy of race relations in America with Nazi Germany, too.:

“… To me, it’s improving our culture, as a society, is really important. Not canceling it, but improving it. You know, other countries have done a terrific job. I keep going back to Germany; I use Germany as a great example. You don’t see swastikas. You don’t see statues of Nazi soldiers all around, and they don’t say that that’s cancel culture. They say that’s improving their culture. I think we need to think more in those terms.”

Rivers begins talking about race at 1:43 in the video below:

Freeman disputed the recent claim by Georgia Gov. Brian Kemp that his state lost this year’s baseball all-star game because of cancel culture. “Cancel culture and partisan actions are coming for your business. They’re coming for your game or your event in your hometown,” the governor said. To which Freeman responded:

“Cancel culture is fake, except when it comes to the canceling of Black lives.

Freeman is guilty of exaggeration and sensationalism with his remarks that, “It's all so old and tired. It's exhausting and scary and maddening. Every day a new video, every day a new story of police strangulating, shooting, macing, or abusing unarmed Black citizens for often doing nothing but existing.”

According to Statista, 30 African Americans have been shot to death by U.S. police officers in the first 102 days of 2021. Yet Freeman claims every day is a “type of hellish Groundhog Day.” Good fact-checking editors are evidently hard to find at USA Today.

Further stretching truth beyond recognition, Freeman alleged the Major League Baseball all-star game was yanked out of Atlanta due to “the state’s voter suppression efforts.”

Tragic as the Wright shooting is, Freeman’s claims of voter suppression and daily unjustified police murders of Blacks is nothing but pure sensationalist journalism. Each falsehood is deserving of a big, fat Pinocchio.

It “doesn’t matter” if Blacks wear military uniforms and serve our country, Freeman says. Or if they obey the orders of police officers. He charges that Blacks who protest are told to leave the country. They’re told blue lives and all lives matter. “Seditionists stormed the beacon of democracy, then walked home like they'd gone to a ballgame. Meanwhile, peaceful protestors angry over the killing of George Floyd are tear-gassed,” Freeman raged.

Now the rest of the story. It’s common knowledge that many of the so-called “mostly peaceful” BLM protesters were looting and burning down neighborhoods in multiple states.

It does nothing to help race relations in America when people with national forums, like those held by Freeman and Rivers, are invoking the Third Reich and fanning the flames of division with lies and exaggerations. It’s also utter nonsense to compare Georgia’s passage of election reform with Nazi racism.