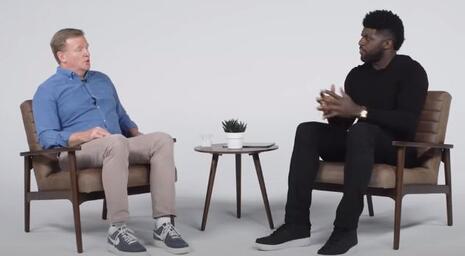 Earlier this year, NFL Commissioner Roger Goodell apologized on behalf of his league for not listening to players protesting since 2016. With the season opener just 18 days away, Goodell on Sunday doubled down on his support for social justice activism in his league, praised former NFL quarterback Colin Kaepernick and said he hopes Americans are ready to accept a new season of heightened protesting.

“I wish we had listened earlier, Kaep, to what you were kneeling about and what you were trying to bring attention to,” Goodell told former NFL linebacker Emmanuel Acho on the video series "Uncomfortable Conversations with a Black Man."

Sports media across the nation jumped on this story. However, some of the more hardcore leftists among them questioned Goodell's sincerity and said he didn't go far enough.

Additionally, Goodell said he would welcome the return of Kaepernick as an active player. "We had invited him in several times to have the conversation, to have the dialogue, I wish we had the benefit of that, we never did. We would have benefited from that, absolutely."

“In fact, many of those guys were in the military, and they’re a military family. What they were trying to do is exercise their right to bring attention to something that needs to get fixed. And that misrepresentation of who they were, what they were doing, is the thing that really gnawed at me.”

Among the skeptics is Alex Didion of NBC Sports Bay Area. "The publicly expressed remorse from Goodell is a step in the right direction, but actions speak much louder than words. Until Kaepernick can make a return to the NFL and get another chance to play, Goodell's dialogue will continue to fall on deaf ears," he wrote Sunday.

Even if Kaepernick never suits up for an NFL game again, "his legacy and impact on the country won't soon be forgotten," Didion said, representing the sentiments of many a left-leaning, Kaepernick-supporting U.S. sports writer.

Trying to grease the skids for the wave of protests sure to begin with the new NFL season starting Sept. 10, Goodell said he now understands the protesting players' message better and he's hopeful the public reaction to players kneeling during the anthem in the future "can become more favorable."

The sharpest criticism of Goodell came from Carron J. Phillips, a Deadspin writer and long-time race-baiter. He said of Goodell's remarks, "The master of spin is at it again" and that the commissioner's actions never line up with his words.

Goodell is the man who supposedly blackballed Kaepernick and tried, in 2018, to institute a league rule requiring players to stand for the national anthem, Phillips says. He's also the "male Kellyanne Conway. A person who gets paid to lie to the American public."

Phillips continued blistering the commissioner, saying, "He’s lying when he said he didn’t listen to Kaepernick. He saw what was happening and watched as a movement grew. He just didn’t care. Kaepernick predicted it, too. And now Goodell blames Kaepernick for not accepting his invitation to explain his reasoning — which Kap had been pretty clear about in the past."

Phillips also ripped Acho, calling his social media series a place "where a Black man coddles white people, allowing them to freely discuss their white guilt and 'apologize' for their willful ignorance. ... It’s a show designed to make white people believe that 'uncomfortable conversations' are the answer — not actions, legislation, or corporate policy."