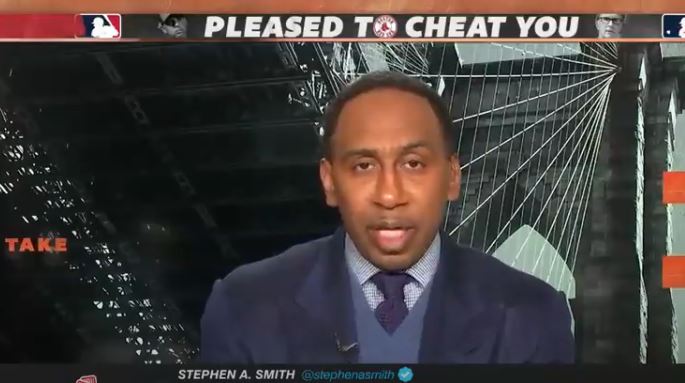 Ranting on ESPN's First Take show Thursday, Stephen A. Smith accused Major League Baseball of racism in its punishment of sign stealing offenders. The sports media blog Awful Announcing roasted him for the bizarre accusation, calling his claim "quite a stretch."

Smith was responding to MLB's punishment this week of the Boston Red Sox for stealing opponents' signs during the 2018 season. MLB suspended Boston’s replay system operator J.T. Watkins for the entire 2020 postseason and took a second-round draft pick away from the Red Sox. Former manager Alex Cora was suspended for the 2020 season, though he'd already been fired by Boston over his previous involvement with the Houston Astros sign-stealing. No players were punished.

Smith went on a convoluted tirade about how, if baseball had a higher percentage of black players like the NFL and NBA, players would have been punished for cheating. No one else on First Take even responded to Smith's Quixotic tilting at windmills. Not even co-host Max Kellerman, who's seldom at a loss for words.

"If this were the NBA, or it (MLB) had the same populace as the NBA or the same black populace as the the NFL, you tryin' to tell me we're supposed to sit here and believe that no player would have been punished, that all players would have been granted immunity? This is the problem. This is the year 2020, and we still see the disparity, the discrepancy that exists. If I'm a ... if you're a black person out there, because I'm a black man, and obviously I speak to a lot of black people, I'm here to tell you somethin' right now: we feel that this is BS. We feel if this was a multitude, if the league was a majority black league, there's no way in hell that black players would have been granted immunity.

"That's the discrepancy involved. We watch players in the National Football League and the NBA get disciplined all the damn time. Okay? And never does it involve something as heinous as cheating, and possibly cheating in the World Series while winning a championship and possibly cheating while winning a World Series in the process like the Houston Astros did a few years ago. Nevertheless not a single player gets punished. It's bogus. It's BS. And I'm gonna say it loud and clear. If Major League Baseball was a majority black league, there's no way in hell these players would have received immunity."

Smith alleges this story also explains why baseball "struggles to elevate itself and ingratiate itself in the mind's eye of the younger generation on the come-up." With an older fan base, MLB wants to turn the clock back, "and that's a damn shame," Smith rails. Turn back to what? Jim Crow? Smith didn't specify, but that's the implication he raises.

Reacting to Smith's "long, twisted stretch in logic for a blazing hot take," Awful Announcing blogger Ian Castleberry said Smith is obviously playing the race card, "But that’s not what raises an eyebrow regarding his comments. It’s the huge leap in conclusions that he makes."

Furthermore, MLB also gave immunity to players because it was the only way to gain their cooperation with baseball’s investigation.

As for Smith's assertion that baseball has a significant lack of minority representation, Castleberry points out that Smith is conflating two completely different matters:

"There’s no correlation. Stephen A. used this story as an opportunity to rant about the poor representation of black people in baseball. OK, sure — it’s a valid criticism. But it didn’t address the issue at hand."

Smith and Castleberry both miss some important points. In the past 16 months, 36 NFL players have been arrested, providing that league with ample justification for punishing players, no matter their race. If Smith is to be believed, all the domestic violence committed by football players, and the murder committed by the late Aaron Hernandez, are not as "heinous" as baseball teams stealing opponents' signs. Unreal.

Declining participation by African Americans in MLB is not based on race, either. Great young black athletes, like Kyler Murray of the Arizona Cardinals, can play at the top level in other sports and reap multi-million dollar contracts immediately. That just doesn't happen in baseball, which sometimes requires years of minor league seasoning before huge paydays and major league stardom.