ESPN Cracks Down On Olbermann's Attack on Hunter 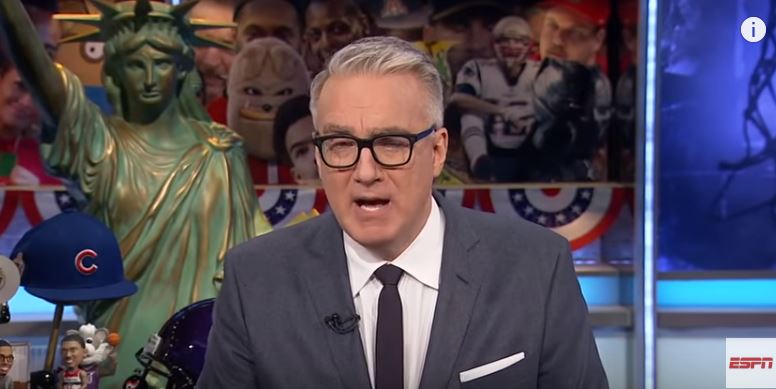 Tempestuous sportscaster Keith Olbermann is used to blowing a gasket, absolutely trashing people and getting away with it because employers who look the other way. What he's not used to is employer disapproval. Earlier this week he urged people to make a hunter's life a "living hell," and ESPN chopped him down to size. Yes, that ESPN! President Jimmy Pitaro previously said his network should not be political and, for once, the head of the network is standing on his word.

The trouble started when a Mississippi man named Hunter Waltman shot and killed a rare albino wild turkey, and the Clarion Ledger posted an article and photo of him with the bird. "Man, it was awesome. I was shaking I was so nervous. It was one of the hardest turkeys I've ever killed," Waltman said. Social media reactions to the harvest were described as mixed.

Olbermann, a gun control advocate who once called the NRA a "terrorist organization," (see file photo above) was certainly not ambivalent though. He let loose with one of his classic, Old Faithful-esque eruptions, tweeting:

"It be rare and it beautiful so me should kill it.

"This pea-brained scumbag identifies himself as Hunter Waltman and we should do our best to make sure the rest of his life is a living hell. And the nitwit clown who wrote this fawning"

Talk about "afflicting the comfortable!"

Smokeroom reporter David Hookstead writes: "Apparently, ESPN wasn’t too pleased about the fact he was targeting some random hunter in the state of Mississippi." ESPN told Fox News, “We have spoken to him about not making personal attacks."

Olbermann had to back down and apologize, via Twitter:

“I am an opponent of trophy hunting and remain so, but nobody should feel threatened. This was anything but my intent, so I unreservedly apologize to Mr. Waltman for this tweet.”

Hookstead provided context, reminding readers that ESPN employees, like Olbermann and ex-anchor Jemele Hill, had in the past gotten away with highly inflammatory social media attacks, and Pitaro is now cracking down on communications that embarrass the organization.

In 2017, Hill tweeted that President Donald Trump and his supporters are "white supremacists." The often unhinged Olbermann has "lost it," many times, and been fired from stints at ESPN, GQ, CNN and MSNBC. Claiming he's an American, not a liberal, Olbermann's GQ video series, "The Resistance," was an ongoing spate of attacks on President Trump. This time, ESPN seemed determined to stop the Olbermania before it really got rolling.

Hookstead writes, "At least Pitaro seems to not be letting employees just run all over the place without saying anything. Should Olbermann be suspended from the network? Should he be fired? I’m not sure I have the answers to those questions, but we should never start calling for somebody’s career, even if it is somebody as unbearable as Keith Olbermann.That’s not a trend anybody should support. Let ESPN take care of its own house, and the rest of us can do the same."